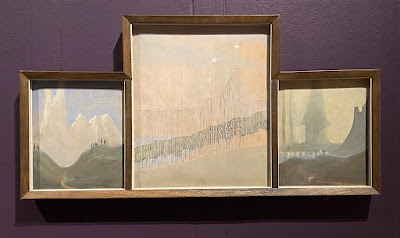 Dulwich Picture Gallery has frequently provided material for this blog - see my earlier posts on Adam Elsheimer (2006), Paul Nash (2010), Salvator Rosa (2010), Tom Thomson (2011), James McNeill Whistler (2013), Emily Carr (2015), Eric Ravilious (2015), Adriaen van der Velde (2016), Tove Jansson (2018), Edward Bawden (2018) and Harald Sohlberg (2019). Yesterday we went to see their new show devoted to M. K. Čiurlionis, the Lithuanian artist-composer whose work I described here ten years ago. I was looking forward to seeing Fuga (1908), the striking semi-abstract painting of trees resembling a kind of graphic score, but it isn't included. However, the other works I mentioned are on show, including Creation of the World, which takes up a whole wall.

Čiurlionis produced all his art in six years and his earliest work includes symbolist landscapes like Serenity (1904/5), a mountain that resembles a giant figure emerging from the sea. Influences include Arnold Böcklin, Whistler and Japanese prints (including Hokusai's wave), Lithuanian folklore, theosophy, the Indian Vedas, Ruskin and the Young Poland movement. Although his mountains, cities and forests have a dream-like quality, the exhibition does include one relatively conventional specific landscape - the triptych Raigardas (1907). Kathleen Soriano describes this in the catalogue: 'the higher foreground is painted at the bottom left and right of the far panels so that the viewer falls into the valley laid out between them, the silvery line of the Kulbinyčia river streaking across it. The actual valley is very close to Druskininkai and was a favourite walking location for Čiurlionis.' (Google doesn't recognise "Kulbinyčia", but Druskininkai is a spa town in the south of Lithuania where Jacques Lipchitz also grew up - he remembered as a boy seeing Čiurlionis "passing like a shadow always in deep thoughts").

The photographs I've included here show examples of the 'landscapes' Čiurlionis painted in which natural elements are recognisable but take on strange forms. My Road begins with a path leading towards a towering mountain but the middle panel is more abstract, its striations like 'inverted musical notation' and stars 'somehow still connected to the earth by long stalks reaching up towards them, potentially noting specific achievements in life'; in the third panel the road has reached a kind of castle. Sorrow I-II shows the sun going down on scenes partly obscured by mysterious dark forms. In the first painting they stretch around a bay like some kind of coastal defence and in the second a solitary grey shape occludes the view of a ruined city and distant line of birds. These have been interpreted as black flags, a reference to the flags carried by political protestors, with the birds perhaps symbolising fallen souls. Čiurlionis sadly never lived to see Lithuanian independence, dying in 1911 when his country was still controlled by the Russian Empire.

Posted by Plinius at 1:35 pm No comments: 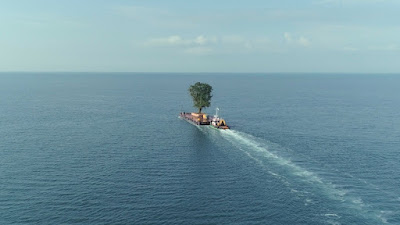 MUBI was a godsend during Covid lockdowns and is still proving good value for money as far as we're concerned. This week I watched Taming the Garden by Salomé Jashi, a documentary with extraordinary images of moving trees. 'Georgia’s former prime minister [Bidzina Ivanishvili] has found a unique hobby. He collects century-old trees, some as tall as 15-floor buildings, from communities along the Georgian coast. At a great expense and inconvenience, these ancient giants are uprooted from their lands to be transplanted in his private garden.' Peter Bradshaw's review in The Guardian mentions some of the obvious references that spring to mind as you watch it (Macbeth, Fitzcarraldo) and describes Jashi's unobtrusively filmed footage of people involved in moving the trees:

Local workers squabble among themselves at the dangerous, strenuous, but nonetheless lucrative job of digging them up. The landowners and communities brood on the sizeable sums of money they are getting paid and Ivanishvili’s promises that roads will also be built. But at the moment of truth, they are desolate when the Faustian bargain must be settled and the huge, ugly haulage trucks come to take their trees away in giant “pots” of earth, as if part of their natural soul is being confiscated.

I am reminded of a previous blog post I wrote on the creation of Song Emperor Hui-tsung's garden, where plants and rocks were shipped in from all over China, and its later fictionalisation in Ming dynasty novel The Plum in the Golden Vase, which tells the story of a licentious and corrupt character called Hsi-men Ch’ing.

Resentment has built up during its construction, as the process of shipping 'so many huge rocks and plants had cluttered up the canals and transport system. There had also been endless corruption and compulsion during the entire high-speed plan'. Unsurprisingly Hsi-men Ch’ing got involved in this. At one point in the novel he discusses with an official the way the 'flower and rock convoys' had impoverished ordinary people, before inviting him to partake of a typically lavish lunch.

Salomé Jashi's slow, beautifully-shot documentary has no Herzogian narrator or any explanation of what is happening - the actual scale of the exercise, its costs, its purpose, its outcomes. Another Guardian piece by Claire Armistead makes the point that 'Taming the Garden is far from a balanced two-minute news report; it stands at the junction of documentary and myth, not even mentioning that Ivanishvili’s garden is now open to the public.' A New York Times article by Ivan Nechepurenko notes that the Shekvetili Dendrological Park opened in 2020, 'but signs declaring this property private are everywhere. CCTV cameras are installed throughout, and motion detectors stand in front of every tree. Look, but don’t dare touch. And that message goes for the lawn, too. Guards with loudspeakers are quick to scold the noncompliant.' He describes Ivanishvili's political background and links to Russia, where he acquired his vast wealth from metals and banking. He also includes reflections from an academic researching the interconnectedness of trees and their supporting fungal networks, who says she felt physical pain when she heard about the project.

The trailer for Taming the Garden embedded above includes some of Jashi's poetic compositions, including lovely details like drifting steam and water running over metal. As Claire Armistead writes, 'although many trees were involved in the filming, their stories are represented by one symbolic journey.' She goes on to pick out a few details:

Villagers gather with their bicycles to see the tree on its way. A man lights his first cigarette in 30 years. An elderly woman weeps and convulsively crosses herself, while her younger relatives excitedly record the removal on their phones. As the tree is sailed along the coast – in a repeat of the image that inspired the film – two bulldozers await it on a stone mole, their excavator arms lowered like bowed heads at a funeral. And in a rich man’s manicured garden, round the half-buried roots of ancient trees held upright by guy ropes, the sprinklers come on.

Posted by Plinius at 8:55 am No comments: