I now have just over a month left of my project to tweet a landscape a day for 2018.  It is never possible to predict how many 'likes' these will get - obviously I feel they're all interesting or beautiful in one way or another.  Possibly my least popular one this year, with just two 'likes' (one of which came from my mother!) was a Robert S. Duncanson landscape painting showing Vesuvius and Pompeii.  This, despite the fact I posted it with the hashtag #BlackHistoryMonth...  Clearly if anyone was looking for this hashtag during that particular month, they were not interested in my Duncanson painting.  He may have been the first prominent African-American landscape artist, but his style of painting is perhaps too unfashionable to excite much buzz on social media.  But his paintings are interesting in their own right - in my tweet I said that "in this view of Pompeii I particularly like that painting-within-a-painting, a large fresco resembling an outdoor cinema." 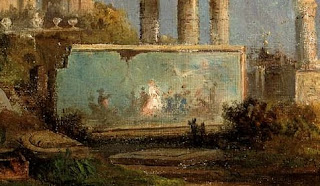 Robert S. Duncanson was born in 1821 in the state of New York. His grandfather was a freed slave from Virginia and his father lived there, until growing opposition to freed black men persuaded him to move north.  The family settled in Michigan and then, as a young man, Robert Duncanson taught himself painting in Cincinnati, 'the Athens of the West'.  His first significant landscape painting, Cliff Mine, Lake Superior (1848) was acquired by Charles Avery, one of several abolitionist patrons who bought his work. In 1853 he visited Europe and a year later he collaborated with the prominent African-American photographer James Presley Ball on an anti-slavery panoramic painting, Mammoth Pictorial Tour of the United States Comprising Views of the African Slave Trade.  When the Civil War began, he moved to Canada and then Britain, where he was particularly impressed by the Scottish Highlands.  He returned to America and died at the age of just 51, possibly due to the effects of lead poisoning.  The view of Vesuvius and Pompeii is thus a late work, inspired by his travels almost twenty years earlier. 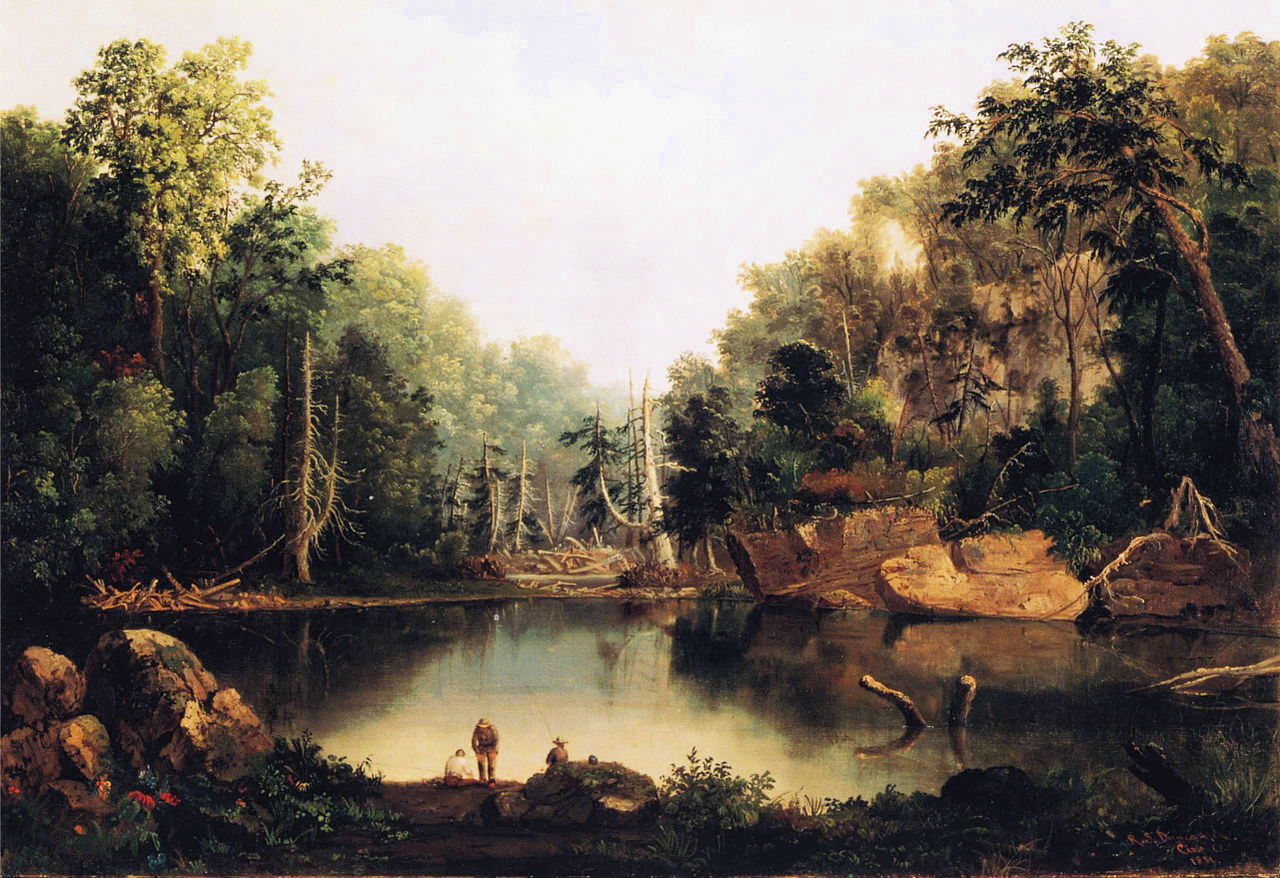 Until this year, Duncanson did not have a tombstone.  However, it was good to come upon a report in the Detroit Free Press (via a JStor article last week), explaining that this is about to change.


'For more than a century, his body has remained in Monroe, about 40 miles south of Detroit, with nothing but grass growing over his grave. Now, a small foundation marks the site of his burial awaiting the arrival of a tombstone.

“No one has asked about him — not in my lifetime,” said Michael Huggins, 55, the manager of the Historic Woodland Cemetery for the past two decades, and the person who helped find the exact location of Duncanson’s burial plot.

[... Now] nearly a century and a half later, Monroe resident Dora Kelley is looking to rewrite a chapter of Duncanson’s life. Kelley worked with LeClair Monuments in Lambertville to design a sleek black granite tombstone for Duncanson complete with his full name, the year of his death and an etched version of his Ellen’s Isle painting from the DIA’s collection.  Kelley also chose a quote from the late artist to grace the monument, which speaks to Duncanson’s unprecedented position as a freeborn artist in the era of slavery: “I have no color on the brain; all I have on the brain is paint.” 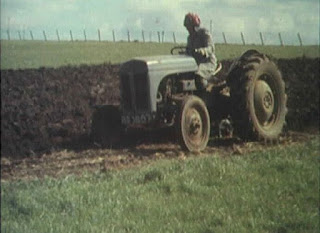 Land Makar is a half hour film by Margaret Tait, whose centenary is being celebrated this year.  Here is a brief description from the BFI's website, where it is listed as one of '10 films that defined Tait’s filmmaking style.'


'Starting with harvest, Land Makar (‘makar’ is a Scottish word for poet) is divided into seasons. The main character, Tait’s farming neighbour Mary Graham Sinclair, is filmed driving a tractor on the fields of an Orkney croft, going about her daily activity on the land and talking about “the beauty of a work day”. Tait started filming this place in 1977, observing the hard labour and activities that define the land. With Sinclair, she also explores the rarely told story of women and land labour.'

Maragaret Tait was a doctor-poet (like William Carlos Williams) as well as a film maker.  In a recent piece about Land Makar, for Sight and Sound, Becca Voelcker quotes the poem 'Now' in which Tait advises the reader to take poetry quickly, 'without water'.


'For Tait, poems are as ephemeral as wildflowers.  Prescribing a quickness of mind and body, like a capsule 'without water', the poem ends with urgency: 'Tomorrow they'll be something else.'  The poem, like Land Makar, imagines place as a cluster of transforming elements.  For Tait, landscape is a continuing process.' I went to see Land Makar last week - it was part of the BFI season 'Rhythm and Poetry: The Films of Margaret Tait'.  Watching Sinclair on her tractor, scything long grass and climbing onto a compost heap, it was impossible not to admire her energy - all the physical effort put into this stretch of land.  At one point she recalls helping some swans build their nests (I caught the drift of this, but found the Orcadian dialect impossible to follow exactly).  Voelcker quotes another poem, 'The Scale of things', where Tait describes 'all the tiny plants and flowers / Which, together interlaced and inter-related, / Make the fine springing turf which people and animals / walk on.'  Crofters and poets (and swans) are makers' whose collective labour sustains the land.' 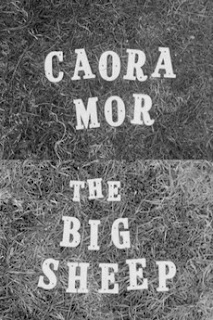 Land Makar was shown at the NFT with The Drift Back (1956), a ten minute 'offical' documentary on the return of some families to Orkney, and The Big Sheep (1966), a 41 minute essay film concerning the landscape of East Sutherland, with striking music and sound effects.  Here is Margaret Tait's own description of The Big Sheep:


"A picture of East Sutherland in 1966. Tourists come north, coach-load after coach-load; and here is the countryside they come to see, dotted with sheep continually nibbling at grass and whin. Then the lamb sales, an open-air auction, after which the lambs are carried south, float after float. Vote, vote, vote, on the posters for a general election, but "Why don't you get your sheep to go and fight for you ? " echoes a voice from the past, at the sight of a recruiting poster at the local Drill Hall. In the glens stand stand roofless houses, as well as more ancient (prehistoric) remains, beside the Highland river.

PART TWO and the seaboard life of today; the railway line along the very edge of that marvellous strip of coast, school sports near the salmon river, crofter's fields where the Cheviot sheep now figure, local buses, electricity, the Highland Games and pibroch contest. Then John N MacAskill plays the "Lament for Donald of Laggan", while a small burn tumbles endlessly seaward, sometimes quietly, sometimes spate, and the film searches the same few yards of it again and again, watching along with the coalman who stands listening to the sound of it as if he could listen to it for ever."

It was that final sequence that I found most moving, with the pibroch constantly changing as it flowed from the pipes, before giving way to the natural music of the river.
Posted by Plinius at 11:40 am No comments: 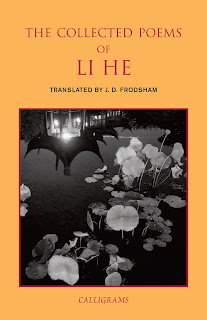 I have been reading J. D. Frodsham's translations, The Collected Poems of Li He, recently reissued by Calligrams.  If you are not familiar with Li He (790-816), here's how he's described in the blurb:


Li He is the bad-boy poet of the late Tang dynasty. He began writing at the age of seven and died at twenty-six from alcoholism or, according to a later commentator, “sexual dissipation,” or both. An obscure and unsuccessful relative of the imperial family, he would set out at dawn on horseback, pause, write a poem, and toss the paper away. A servant boy followed him to collect these scraps in a tapestry bag.

The book is wonderfully well-furnished with notes and an extensive introduction.  There is a short analysis of Li He's use of colour, similar to what I wrote about recently in relation to Georg Trakl (1887-1914).  Despite living 1,100 years and over 7000 km apart, Li He and Trakl had a lot in common.  I mentioned Trakl's use of black - 'black decay, black snow, black wind, black waters, black silence'.  For Li He, there was white, which in China is associated with mourning and misfortune.  'Even in the West, psychologists tend to associate a strong liking for white with psychic abnormality ... He's landscapes, drenched in this white radiance, shine with an unearthly pallor.'

Frodsham writes that Li He 'was haunted by the mystery of whiteness as another great, poet, Lorca, was haunted by the spell of green.'  This is a reference to Lorca's 'Romance Sonambulo' which begins 'Verde que te quiero verde', 'Green, how I want you green.'  Start looking for doomed poets who were obsessed with colour and you will quickly encounter other cases.  Dylan Thomas, for example, uses green 46 times in his poetry, black 39 and white 37.  This information comes from a 1972 article comparing Thomas and Lorca's use of green.  'Fern Hill' is the Thomas poem most infused with the colour green, where it means youth, innocence, and the hills and fields around a Carmarthenshire farmhouse where the poet went to stay as a boy.

An analysis by Eliot Slater revealed that Shelley and Keats were 'relatively abundent' in their use of colour.  However, 'Shelley uses for the greater part straightforward and commonplace words: yellow, blue, snowy, purple, green, grey, white, black, golden, hoary, dun, azure, etc., and very rarely such exotic terms as "moonlight‑coloured". Keats is much freer with such words, and phrases as vermeil, damask, verdurous, Tyrian, rubious‑argent, ruddy gules, volcanian yellow, etc.'  Shelley favoured blue and green, Keats used white more than any other colour.


The entire mountain bathed in a white dawn.

Jade mist on green water / like pennants of white.

And, as Frodsham writes, it is against this pallid background that 'the other colours burn with a brilliant flame...'


A thousand hills of darkest emerald

I will end here with a longer quote, as these isolated lines cannot do Li He's poems (and Frodsham's translations) justice at all.  I think it should be alright to include one whole short poem here, 'Cold up North', which describes ice on the Yellow River (a subject I once wrote a whole post about here).  The poem is unusually straightforward for Li He, and requires no particular explanation.  In its colours, it moves from the darkness of a winter sky to the jade white of frozen waterfalls.


One quarter lours black while three turn purple,
Ice vaults the Yellow River, fish and dragons die.
Tree-bark three feet thick splits against the grain,
Chariots of a ton or more travel on the river.

Frost-flowers on the grass, big as silver-coins,
No brandished blade could penetrate the sombre sky.
Swirling in a raging sea the flying ice-floes roar,
Soundless hang mountain waterfalls, rainbows of jade.