Landscape on a Chinese fan

I'm rather busy at the moment (having this week become a father for the second time) so here's just a brief landscape thought to ponder from Fernando Pessoa's The Book of Disquietude (trans. Richard Zenith):

'Useless landscapes like those that circumscribe Chinese teacups, starting out from the handle and abruptly ending at the handle. The cups are always too small... Where would the landscape continue and with what (...) of porcelain, if it could continue past the teacup handle?
Certain souls are able to feel a profound sorrow because the painted landscape on a Chinese fan isn't three dimensional.' 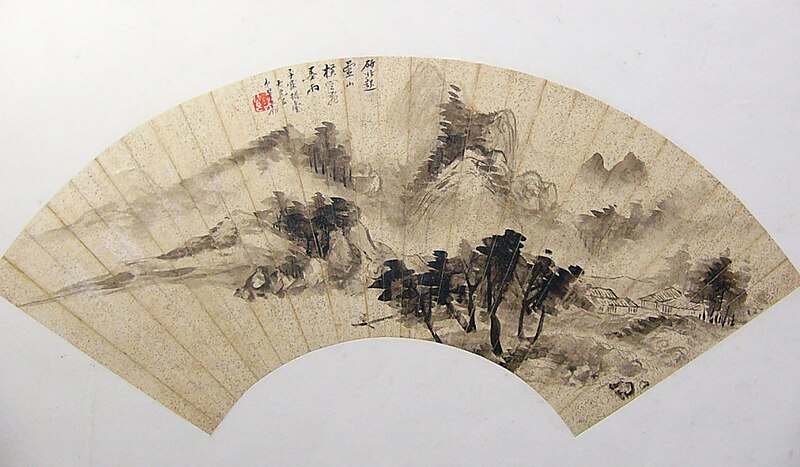 To Tate Modern last night for a talk by Dan Graham. He mainly discussed his various pavilions and architectural structures, including recent projects like the Hayward Gallery refurbishment. He has a strangely nervy delivery and it is quite hard to imagine him among the hipsters of the New York art world. He sometimes gives a strange impression of insecurity for such a renowned artist, referring to "my friend Steve Reich", "my friend Sol Le Witt", "my former girlfriend Laurie Anderson", as if we'd only value his work by association with others. He complained about bad experiences with the Dia Foundation (who wouldn't let Thurston Moore perform in Graham's Two-Way Mirror Cylinder Inside Cube) and now with the Hayward who have said his installation 'doesn't work'. He had some amusingly critical things to say about Bill Viola.

Graham talked quite a lot about his influences, among whom he mentioned John Constable (especially with reference to the cloud paintings) and the Hudson River School. He has written an article for Tate magazine which explains his interest in the apocalytic landscapes of John Martin. In an interesting recent interview with Graham, Pietro Valle observed: "You seem to be more and more interested in landscapes. However, there's a difference between landscaping, i.e. the production of specialized areas in the suburban culture (often segregating buffer zones), and the landscape that you try to unveil with your pavilions." Graham's response: "In my Two-Way Mirror Hedge Labyrinth I combine the hedges that are typical of Baroque garden labyrinths with the glass that is typically used for corporate buildings. That specific pavilion was built for the home of a collector and the hedge is the extension of the fence of the existing garden. Hedges have become a means to mark the boundary between public and private in the single-family residential culture. I try to mix urban greenery elements with elements taken from the corporate areas but in a different way compared with the halls in skyscrapers where the greenery is imprisoned inside the building."
Posted by Plinius at 1:19 pm 2 comments:

My copy of the New York Review of Books arrived today and I whiled away a dismal bus journey reading an article about James Laughlin, whose enviable life combined the roles of rich playboy, ace skier and founder of New Directions, publisher of many of the most interesting twentieth century writers. A complete list of these would be lengthy, but would include: Pound, cummings, Bishop, H.D., Zukofsky, Levertov, Snyder, Dylan Thomas, Henry Miller, Lorca, Neruda, Borges, Rilke, Ungaretti, Nabokov and Sebald. As many of these had other publishers in England, I don't have many New Directions books on my shelves, but looking just now I realised those I do have are particularly choice items it would be hard to imagine appearing from a publishing house not bankrolled by someone like Laughlin (or benefitting from the profits New Directions earned on Hermann Hesse's Siddhartha). I think my favourite is Henri Michaux's Ideograms in China, a slim volume originally written in 1971 that shares many of the preoccupations of Ernest Fenollosa's The Chinese Written Character as a Medium for Poetry (a seminal text for Ezra Pound and some post-Poundian poets). 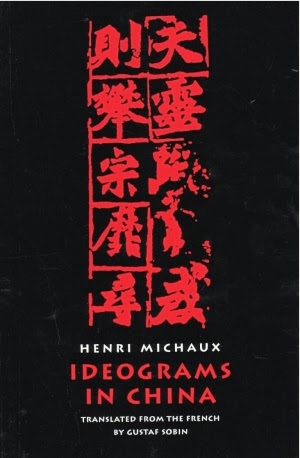 Michaux, like Fenollosa and Pound, sees in the origins of Chinese script a direct response to nature. The idea of natural signs (which of course also figures in Western thought, e.g. Plato's Cratylus) seems to offer the possibility of presenting and combining actual elements of landscape, rather than simply evoking a scene in a succession of abstract signs. Michaux (translated by Gustaf Sobin) describes the recovery of ancient Chinese writing (c. 120 CE) by scholars who compiled a 'dictionary of orginal signs', so that a written page could be full of 'everything to be found in the world': 'full of water falling, drop by drop, out of clouds / of ferryboats crossing from one side to another / full of earth embankments / of furnaces... scenes that lend themselves to reflection / scenes of all sorts... clustered that they might end in ideas / or unravel as poetry.'

Despite these efforts, the subsequent development of Chinese writing led further and further from nature, towards abstraction. However, as Richard Sieburth says in his afterword: 'if calligraphy enables the material body of the sign to be transfigured into pure spirit, the very activity of this scriptura scribens nonetheless plunges us back (by a kind of dialectical reversal) into the immanent energies of a natura naturans. Freed from imitating nature, signs may now signify it...' And so writing itself can become a kind of habitable landscape. Michaux ends his poetic essay with a final observation on Chinese writing: 'Calligraphy around which - quite simply - one might abide as next to a tree, or a rock, or a source.'

Posted by Plinius at 8:37 pm No comments:

Email ThisBlogThis!Share to TwitterShare to FacebookShare to Pinterest
Labels: language

The fortress at Qalat-i Gird

The British Museum has an exhibition of Georg Gerster's aerial photographs of historical sites, The Past From Above. The images that struck me initially were those with an unexpected formal beauty, like the long oval of the Stadium of Aphrodisias in Turkey, or a burial mound in the Niger inland delta (with its superficial resemblance to Smithson's Spiral Jetty), or the contrast between the ancient ruins at Ebla in Syria and the intricate and beautifully coloured field pattern that now surrounds it. Some of the photographs show landscapes that would be spectacular even without a historical trace, particularly those associated with religious sites: tombs built onto the side of Cerro de los Metates, a volcanic chimney in Mexico; or the Dabra Damo monastery, built on a table mountain in Ethiopia; or the wave-battered island of Skellig Michael, site of another monastery.

Some of the most interesting photographs show natural processes at work, like the sand dunes threatening the ancient field system visible at Kharga Oasis, Egypt. Gerster photographed another dune landscape at Sistan, Iran, where the Wind of 120 Days seems to have obliterated everything beneath the sands, except for the circular shape of Qalat-i Gird fortress. According to Dietrich Huff, this 'much-feared' wind determines the angles of trees and buildings and creates 'bizarrely beautiful and distinctly shaped shifting dunes.' The fortress probably dates from the 13th century, after the composition of Firdausi's Shahnama in which the legendary hero Rustam was depicted as the saviour of Sistan, but early enough to have witnessed the conquest of Tamburlaine and his wounding at the siege there.
Posted by Plinius at 9:16 pm No comments:

Environmental sound artist Philip Blackburn has an interesting website called Music and Nature featuring various soundclips and interviews. For example, there is video footage of his own Cannon River Eddies, 'a performance installation in Northfield, Minnesota, to bring attention to the role of water and the presence of the river in the town center'. There is also a survey of wind music by Rene Van Peer and features on animal music, ranging from bird song to the performances of the Thai elephant orchestra.

Postscript: September 2015
This Music and Nature website still exists, although much has been written about music and nature in the ten years since it was created.  As the post above is a bit short I thought I would summarise that survey of wind music by listing his examples...

Posted by Plinius at 9:26 pm No comments:

Among the interesting works of landscape art in Tacita Dean and Jeremy Millar's book Place is one they describe as having 'great simplicity and poetic richness': When Faith Moves Mountains by Francis Alÿs. The artist was struck by the hardship of life on the edge of Lima, where seventy thousand people live in shanty towns without running water or electricity. Displaced from the city by social unrest and economic crises, they came to live on the Ventanilla dunes, slowly moving hills of sand that seem like metaphors for the forces acting on the people of Lima. On April 11 2002, Alÿs organised an action he describes as 'at once futile and heroic, absurd and urgent.' Five hundred volunteers formed a line at the foot of a dune and working only with shovels managed to mve it about four inches from its original position.

There is an Artforum article in which Alÿs discusses this work. "When Faith Moves Mountains is my attempt to deromanticize Land art. When Richard Long made his walks in the Peruvian desert, he was pursuing a contemplative practice that distanced him from the immediate social context. When Robert Smithson built the Spiral Jetty on the Salt Lake in Utah, he was turning civil engineering into sculpture and vice versa. Here, we have attempted to create a kind of Land art for the land-less, and, with the help of hundreds of people and shovels, we created a social allegory. This story is not validated by any physical trace or addition to the landscape. We shall now leave the care of our story to oral tradition, as Plato says in the Republic. Only in its repetition and transmission is the work actualized. In this respect, art can never free itself from myth. Indeed, in modem no less than premodern societies, art operates precisely within the space of myth."
Posted by Plinius at 6:45 am No comments: