How does inscape relate to landscape?  For Gerard Manley Hopkins, inscape was that which gives something its own special identity.  We come to feel and perceive these qualities through what he called instress.  J.R. Watson: ‘the inscape of an elm tree is the property by which we recognize it: but it is not just its shape or ‘scape’: it is its ‘inscape’, its inner being or self-hood, the thing itself in its own special nature.’

However, inscape is not necessarily about the qualities of a particular tree.   For example, on May 18 1870, Hopkins noted in his diary “great brilliancy and projection: the eye seemed to fall perpendicular from level to level along our trees, the nearer and further Park; all things hitting the sense with double but direct instress.”  Here the instress is a force from within the trees which gives this landscape its particular intensity.

W. H. Gardner describes instress as ‘the sensation of inscape – a quasi-mystical illumination, a sudden perception of the deeper pattern, order and unity which gives meaning to external forms.’ Hopkins experienced instress as he walked in the landscape, studying bluebells and horned violets, looking at the moon and the sky or the waves of the sea, even, as here, in encountering an old stone pointed arch:

'The day was bright, the sun sparkling through a frostfog which made the distance dim and the stack of Denbigh hill, as we came near, dead mealy grey against the light: the castle ruins, which crown the hill, were punched out in arches and half arches by bright breaks and eyelets of daylight. We went up to the castle but not in: standing before the gateway I had an instress which only the true old work gives from the strong and noble inscape of the pointed arch...'

An aerial view of the Val de Bièvre 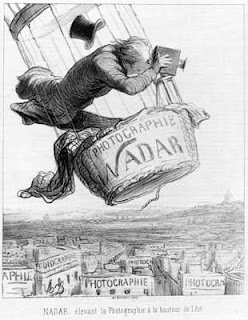 Before photographs could be taken from aeroplanes, aerial landscapes had to be captured by other means:

Posted by Plinius at 3:37 pm No comments:

Figure in a Mountain Landscape

Peter Doig is coming to Tate Britain for a talk next month. I was told the tickets all went within 30 minutes of going on sale, so sadly I won't be able to report on what he says, but I'll try to get to the exhibition. Doig tends to re-work his themes, one of which is Figure in a Mountain Landscape, examples of which are here, here and here (this last one is subtitled, for no clear reason, 'I Love You Big Dummy', which is presumably a Captain Beefheart reference..?) The original for Doig's cowled figure en plein air is a 1935 photograph of Franklin Carmichael, one of the Canadian Group of Seven painters, sketching at Great Lake Nortern Ontario. Rather than paint and repaint a landscape from nature, Doig paints and repaints a photograph of someone painting a landscape from nature.

There is a short article about Doig in the latest issue of Tate etc. by the Brooklyn-based critic Lyle Rexer (great name!) He says that Doig benefits from "a certain Richter effect, that is from anti-Platonist critiques, when it came to be understood that he, too, often preferred two-dimensional images as models to the common reality of the breathing world." When I said in a previous post of Gerhard Richter's landscapes "there is little comfort to be had in these highly artificial paintings, based on photographs or picture postcards" I was of course referring to those who would seek spiritual solace in Nature or desire a painting that transmits the artist's feeling for a particular place. But of course many contemporary viewers will want precisely to be reassured that this is not what is happening. Rexer says that one of Doig's curators, for example, "went so far as to assure us that there is no nature painting here, no plein air, only good studio conceptualism." However, in a sense Peter Doig simply approaches painting in a traditional way. It's just that instead of painting, say, Cadmus and a snake in a landscape, like Poussin, Doig paints Berry Oakley and a canoe in a landscape.

Posted by Plinius at 6:58 pm No comments: 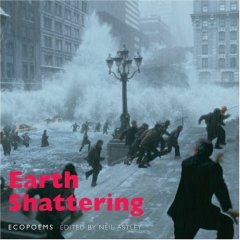 Earth Shattering: Eco Poems is the latest anthology from Bloodaxe editor Neil Astley, following recent successes like Staying Alive, Being Alive, and Pleased to See Me: 69 Very Sexy Poems. It is full of interest and I’m sure I’ll draw from it in future postings, but here I’m going to concentrate on the introduction where Astley sets his collection in context, discussing recent anthologies and critical writing on ecopoetics. Here are some of the chief sources for Earth Shattering:

The majority of the poetry in Earth Shattering is modern, even though the anthology starts with some of David Hinton’s ‘wilderness poets of ancient China’. But I’ll end this posting with an 'ecopoem' that will be out of copyright, and which provides a link to the previous posting: ‘First Known When Lost’ by Edward Thomas:

I never had noticed it until
‘Twas gone, - the narrow copse
Where now the woodman lops
The last of the willows with his bill
It was not more than a hedge overgrown.
One meadow's breadth away
I passed it day by day.
Now the soil is bare as bone,
And black betwixt two meadows green,
Though fresh-cut faggot ends
Of hazel made some amends
With a gleam as if flowers they had been.
Strange it could have hidden so near!
And now I see as I look
That the small winding brook,
A tributary's tributary, rises there.

The final entry in the war diary of landscape poet Edward Thomas is dated 8 April 1917 – he was killed the next day at 7.36 am by a shell blast:

'8. A bright warm Easter day but Achicourt shelled at 12.39 and then at 2.15 so that we all retired to the cellar. I had to go over to battery at 3 for a practice barrage, skirting the danger zone, but we were twice interrupted. A 5.9 fell 2 yards from me as I stood by the f/c post. One burst down the back of the office and piece of dust scratched my neck. No firing from 2-4. Rubin left for a course.'

The Faber ‘Collected Poems’ also reproduces these brief notes Thomas made on the last pages of the diary:

'The light of the new moon and every star

And no more singing for the bird...

I never understood quite what was meant by God

The morning chill and clear hurts my skin while it delights my mind Neuville in early morning with its flat straight crest with trees and houses – the beauty of this silent empty scene of no inhabitants and hid troops, but don’t know why I could have cried and didn’t'

Loose inside the diary there was a photograph and a slip of paper with several addresses and these words:

'Where any turn may lead to Heaven

Or any corner may hide Hell

Posted by Plinius at 7:00 pm No comments:

One of my New Year's resolutions is to include a few more images in 'Some Landscapes'. The one above is, I have to admit, a rather inauspicious start: a murky snapshot of some metal on a table, framed by lumps of coal. It was taken at the V&A's 'Out of the Ordinary: Spectacular Craft' exhibition yesterday. Normally I don't have images of contemporary art works for copyright reasons but nobody seemed to mind photographs being taken at the V&A. This is Lagos is a metal cityscape seen from above, where it is impossible to discern what is signified by each of the individual scraps of metal, or what they originally were before the artist found them. I thought the way Amoda creates a semi-abstract topography was reminiscent of Anne Wilson's piece earlier in the exhibition, which can be seen in another poor quality photo below. Some of her arrangements of lace and pins look like winter trees in a snowy landscape, whilst other features are more mysterious. There is a better photograph of a 2002 version of Topologies here. 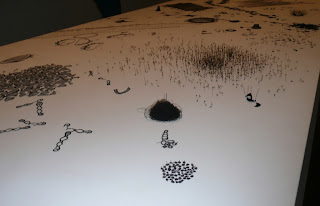 Of course craft is by definition skillful, but it can still be surprising to encounter really intricate beauty or objects you would not have thought possible. Annie Cattrell's Conditions for example, (see third and least-bad photo below) seem to imprison real clouds in blocks of glass. I wonder what John Constable, some of whose cloud studies are owned by the V&A, would have made of them? I suppose one difference is that he wanted to capture the whole sky rather than an individual cloud, as in a 5 September 1822 sketch: "looking S.E. noon. Wind very brisk. & effect bright & fresh. Clouds. moving very fast. With occasional very bright openings to the blue." 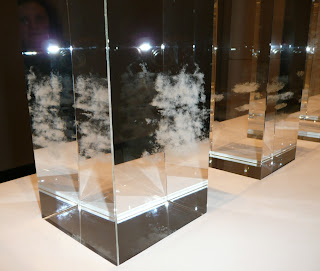 
So, as I said, I will try to put some more images into this blog in 2008, and maybe add a few retrospectively to earlier postings. I'll also try to provide more labels to help navigate certain themes and find quickly the entries on some key figures (like Constable - see label below). And at some point I'll get round to adding links and a decent blog roll...
Posted by Plinius at 12:34 pm 1 comment: