A river made of crystal water-drops 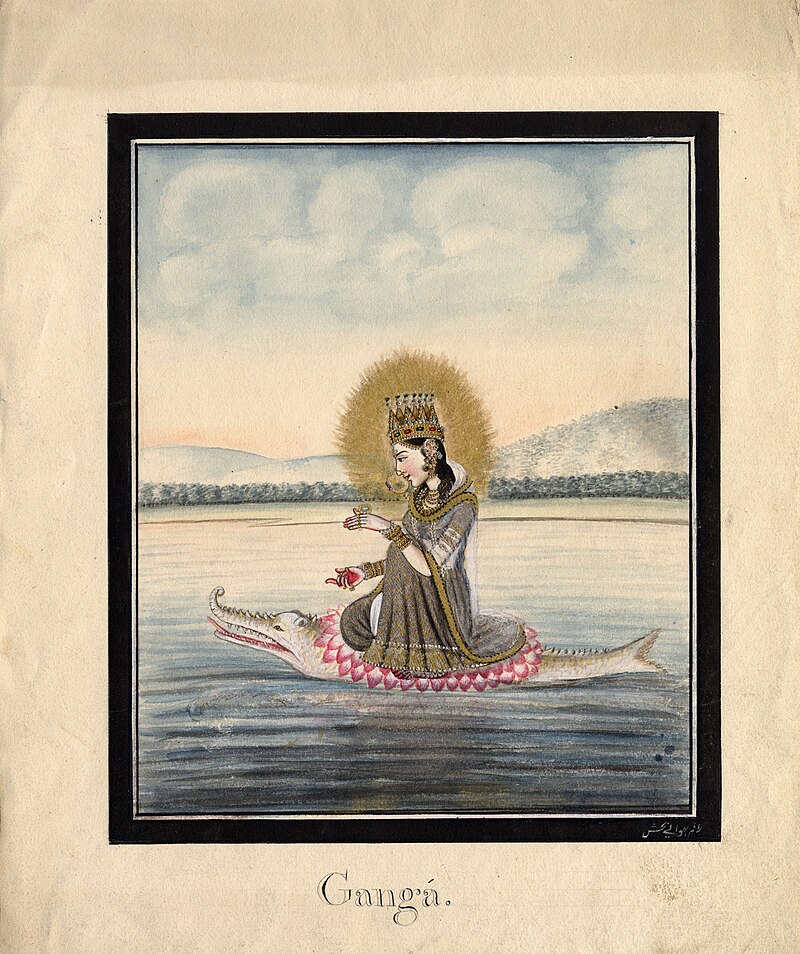 Gaṅgā, the personification of the sacred river Ganges,
early 19th century watercolour in The British Museum

Eric Newby's Slowly Down the Ganges introduced me to the fact that the river has 108 names, all of which he lists so that they form a kind of poem at the beginning of the book.  The river is also a goddess, Ganga, and these names are thus part of Hindu faith, but as I have often talked here about aspects of landscape in European religious art, it does not seem inappropriate to take them out of context here. You can find the full list in English translation online. Here are the first ten, which show the way they mix very short geographical description with snatches of mythology and descriptions of the goddess herself.

And from the remaining 98 names, here are ten more that together form a word picture of the river.

The mountains and the islands have a blue halo

Sophia de Mello Breyner has been one of my favourite poets since I first read her work in Richard Zenith's translations from the Portuguese in the late 90s. I kept recommending Log Book to people until I realised it had gone out of print and become ruinously expensive. Her poems do not describe landscapes but they are usually set near the sea and speak of sunlight and cicadas, pine trees, wind and wild sea birds. Her early memories were of reading Homer by the seashore in Portugal. Richard Zenith's introduction quotes her recollection of this: 'The ocean was a deep blue, and shone brilliantly. For me this world represented happiness, and I found the same world in Homer, in The Odyssey and then in The Iliad.'

Earlier this evening I watched Rita Azevedo Gomes’ 2016 essay film Correspondências, about the letters exchanged by Sophia (as everyone called her) and Jorge de Sena, her friend and fellow poet, who went into exile first in Brazil and then the USA. Gomes has her own friends read the letters, sometimes in their own homes and sometimes out in the landscape. It reminded me a bit of Tacita Dean's film Antigone, which I mentioned here a couple of years ago - perhaps because that too refers to Greek myth. Correspondência 1959-1978 has not I think been translated into English, but the film had subtitles and I am therefore able to quote below from one of the letters. In it, Sophia de Mello Breyner writes about visiting Greece, finding there what she had long imagined since those days of childhood when she first looked into Homer. 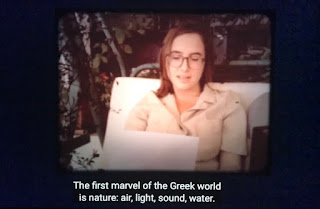 'I won't try to describe Greece to you or try to tell you how happy I was there. It was as if I said goodbye to all my misunderstandings. About Greece, only Homer had told me the truth: but not all of it. The first marvel of the Greek world is nature: air, light, sound, water. It's a mythological nature where the mountains and the islands have a blue halo that isn't imaginary, but an objective physical phenomenon they already debated in ancient times. Under the high sun, in an indescribable blue clarity, the air is so light it gives you wings and the slightest sound stands out whole and clear. The enormous and constant mountains fill everything with solemnity. It smells of resin and honey, an austere and lucid inebriation. ... In Greece everything is built as a connection between man and nature. In a way, in Greece I found my own poetry.'

Posted by Plinius at 9:54 pm No comments: