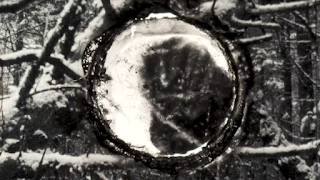 Well, the weeks drag on and I am starting to forget what hills, rivers and shorelines actually look like.  I keep wondering whether it is worth the health risk to hire a car or take a train to see something other than Victorian terraces.  But where would we go?  The virus has drawn attention to the way we pick destinations to experience and how much effort we are prepared to make to get to them.  Conversely it has shown how much interest there is in exploring the local streets - not exactly deep topography, but still a lesson in noticing previously overlooked details.  I'm sure I'm not alone in having made a short film based on these exercise walks - it seemed an obvious thing to do, even if I am no Jonathan Meades (despite insisting on posing in similar shades). 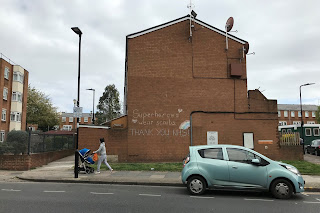 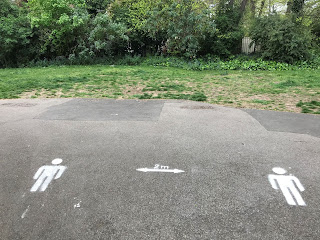 Lockdown walks near our home in London 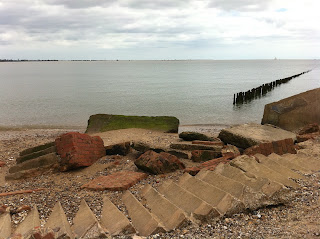 Mersea Island photographed by me in 2011

When I asked my wife where, in theory, she would most like to travel to outside London, she thought about it for a bit and then started reminiscing about Mersea Island.  I was thinking about this when I started reading a place-themed edition of the Moving Image Artists Journal, since Mersea Island is actually where the editors Danial & Clara have been living under lockdown.  How, I wondered, did these different filmmakers, with all the possibilities of mobility before coronavirus, choose particular landscapes to be the focus of their films?  A few examples from the thirteen articles:
Sadly such opportunities are no longer available in 2020 (we were actually due to go to Finland this summer but have now cancelled the holiday).  Experimental films will have to stay closer to home.  Fortunately there is a lot you can do without leaving the house at all - I've recently been looking through old VHS footage from the 90s, exploring the landscape of memory and family history.  And I know from her tweets that Amy, confined to her flat, has been interrogating and repurposing old nature documentaries.  If it is possible to head out of London soon, perhaps even to Mersea Island, I will take the time to record some footage and keep it ready, just in case we have to go into lockdown again... 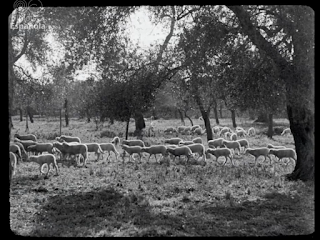 I was intrigued by a story in the Guardian the other day: 'almost a century after it was shot, a brief but beautifully made documentary that could be the first talking picture directed by a woman in Spain has been discovered after the forgotten and miscataloged footage was re-examined during the coronavirus lockdown.'  You can read the article for the story on the film's rediscovery and how they found out about the director, María Forteza. In the context of this blog, it was interesting to read the comments by archivist Josetxo Cerdán, that the film was

'well shot and structured, and far better than most of the “aesthetic documentaries” of the time that were intended to show off the beauties of the countryside and of historical monuments. “They tend to be painfully dull: you get a monument, then another monument, then a mountain,” he said. “But this isn’t like that. You have the explanatory prologue and the little narrative of the boat arriving on the island and then the tour. The camera is also very well positioned in every shot.”' 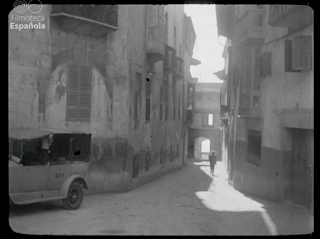 That last point can be seen in the two screen grabs I have included here.  In the first shot, sheep move across the screen haloed by sunlight, and in the second a man walks down a narrow street of shadows.  Although music forms the soundtrack, you can imagine the sound of a bleating flock and the quiet of a town resting during the heat of the day. The film features music by Isaac Albeñiz (1860-1909), one of whose compositions for guitar is Mallorca.  Albéniz is best known for his Impressionist Iberia suite which is inspired by twelve places in Spain.

I'm not exactly sure what Josetxo Cerdán defines as 'aesthetic documentaries', although it is easy to imagine them.  By this time, the travelogue film, which dates back to the beginning of cinema, often resembled a clichéd series of moving postcards.  As the BFI website explains, they were often commissioned to promote tourism


'with bodies such as the Travel and Industrial Development Association (TIDA) in the 1930s, and with Tourist Boards from all countries and regions up to the present. The postcard analogy is therefore very apt, with films such as Claude Friese-Greene's The Open Road series (1924-1926) being largely a compilation of beautifully composed, and strangely familiar views, probably informed by a swift visit to the local gift shop.'

Mallorca has been dated to between 1932 and 1934.  I must admit I am unfamiliar with early 1930s Spanish travelogue films, so am not really able to contextualise it.  All I know about is the parody Luis Buñuel made, Land Without Bread, released in December 1933.  His controversial pseudo-documentary highlighted the poverty and disease of the inhabitants of Las Hurdes.  Graham Greene, who saw it in 1937, described it as "an honest and hideous picture", although the truthfulness of the film has long been disputed (see a Guardian article from 2000, 'Buñuel and the land that never was').  As I write this, the news is full of hideousness and it is tempting to keep to a diet of cultural escapism.  Travel looks impossible for some time and any footage recalling the simple pleasures of tourism now seems charming and nostalgic, no matter how clichéd it is.
Posted by Plinius at 7:24 pm No comments:

Email ThisBlogThis!Share to TwitterShare to FacebookShare to Pinterest
Location: Majorca

Onuphrius in the wilderness 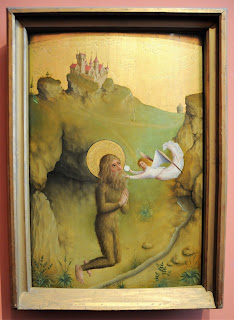 You could write a whole book about landscapes in depictions of the Desert Fathers and Desert Mothers (and I would read it).  A chapter on Saint Onuphrius would certainly include this painting, which I photographed three years ago in Zurich.  The desert here resembles a summer lawn and the little stream seems to provide just enough water to irrigate a few herbs.  Also in Switzerland, the Kunstmuseum Basel has an austere landscape from 1519 in which Onuphrius prays among bare red rocks and broken tree trunks. It was painted by a local artist, Conrad Schnitt.  Sadly there is no image freely available online - all I could find was one overwritten throughout with 'Alamy' to prevent copying.  I'm therefore only able to provide a tiny detail below, showing a distant building that I'm guessing is the monastery Onuphrius lived in before he headed into the desert.  In the Zurich painting there is a similarly-placed structure, which looks like a beautiful medieval castle standing out against the golden sky.

We only really know about Onuphrius from an account of Paphnutius the Ascetic, a fourth century Egyptian anchorite.  Paphnutius ventured into the desert to see what it would be like to be a hermit and there he saw a wild man covered in hair, wearing only leaves.  This was Onuphrius, who said he had survived as a hermit out there for seventy years.  They spoke until sunset and spent the night in prayer.  In the morning Onuphrius died and Paphnutous covered his body with a cloak and left it in a cleft in the rocks because the ground was too hard to bury him. 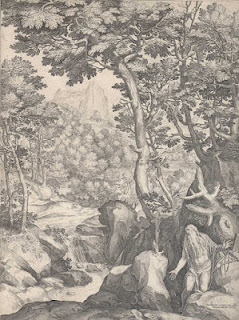 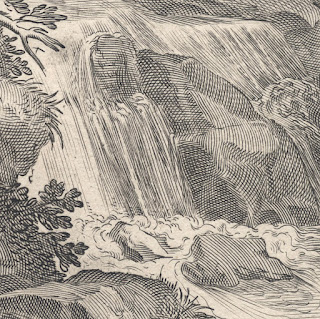 You would think such an inhospitable place would always appear as a bleak-looking landscape in art.  But this isn't always the case, as can be seen in Cornelis Cort's print.  Here there are trees in full leaf and plentiful water in a wonderfully well-drawn river.  I have reproduced another print below by Albrecht Dürer.  It shows John the Baptist with a saint once thought to have been Saint Jerome, but as the National Gallery curators write, there is no lion to be seen and 'instead, the garland of hops points towards Saint Onuphrius.'  They note that 'the relatively densely worked areas in the centre of the print contrast with almost rudimental landscape in the background.'  However, for me, the distant vista is beautiful rather than 'rudimental', with its sense of space and light, and that sea fringed with trees and dotted with two small boats beneath waves of cloud... 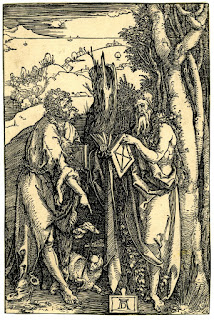 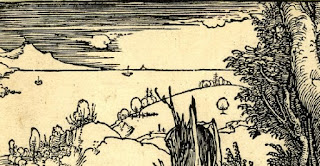 Albrecht Dürer, John the Baptist and Saint Onuphrius in the Wilderness, c. 1503-4

I won't try your patience here by describing lots more images of Onuphrius in the history of art.  There have been many icons in which his standing figure is placed in front of his cell, between hills or on a rocky plain.  Artists whose views of the saint are set in interesting wilderness landscapes include Lorenzo Monaco (c. 1370-1425), Francesco Morone (1471-1529), Jan van Haelbeck (1595-1635), Francisco Collantes (1599-1656) and Salvator Rosa (1615-1673).  I will conclude with just one more: a painting orginally made for the Buen Retiro Palace in Madrid.  The artist responsible for the figure of Onuphrius is not known but the painter of the landscape is unmistakable.  The life of a hermit in this sublime landscape looks almost inviting. 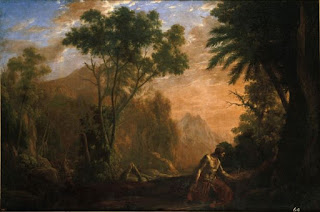 Landscapes Drawn towards and away from the Sun 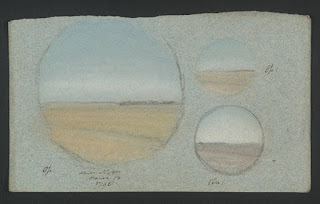 Thomas Kerrich, Diagram of Three Landscapes Drawn towards and away from the Sun, 1796

I just came upon a photograph I took of two remarkable drawings by Thomas Kerrich - I think they were in Patrick Keiller's 2012 exhibition, The Robinson Institute?  I last featured Kerrich here when I highlighted one of his views of the beach at Lowestoft, far more minimal than you would expect from a painting done in 1794.  These sketches come from around the same time: the cloud study is undated, but the three landscape views in circles were drawn around noon on March 18, 1796. Those three circular views could almost be conceptual art and remind me of photographs taken through Nancy Holt's Sun Tunnels. The colour trials might be strange light effects somewhere beyond the stratosphere, although at first glance this image could be taken for fleeting impressions of pennants in a regatta and foam tipped waves. 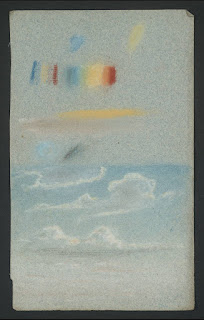 The Tate has some other nice cloud studies by Kerrich - I have included one below.  The British Museum also has five of his sketches which 'record changes in the light and weather along a stretch of coastline near Lowestoft and Pakefield in Suffolk in August 1794.'  The curators suggest that

'Their immediacy and freshness are due to the fact that they were done directly from nature, as indicated by the artist's notation; but also because as an amateur, Kerrich was not constrained by conventional landscape formulae and was free to explore weather and cloud effects with a simplicity and directness not equalled until the work of Constable nearly two decades later.' 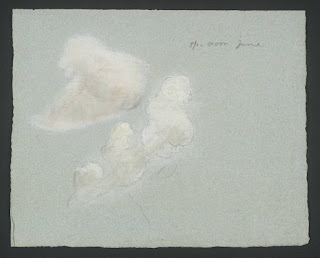