I spent the day yesterday at an interesting Tate event: ‘The Printed Path: Landscape, Walking and Recollection’: ‘taking the late German-born writer WG Sebald as their guide, artists and writers consider our relationship to place and its recollection’. The event was linked to the Sebald-inspired Waterlog exhibition which is now on in Lincoln (I probably won’t get to it but I can say that the catalogue is quite good). Waterlog includes a superb new film by Tacita Dean, Michael Hamburger (2007), in which the poet and translator of Hӧlderlin (who features in Sebald’s Rings of Saturn) is seen talking about his apple trees. So inspired were we by seeing this that today we headed straight for Apple Day at Fenton House to buy a selection of unusual apples... Anyway, Waterlog also features Alec Finlay, Jeremy Millar, Simon Pope, Matthew Hollis, critic Brian Dillon and George Szirtes, poet and friend of Sebald’s, all of whom were at Tate Britain for ‘The Printed Path’. Robert Macfarlane is also in Waterlog but was not at the Tate – hardly surprising given how busy he seems to be... Having published The Wild Places, he is now apparently working on a biography of Sebald.

The Sebaldian sense of a landscape haunted gave an opportunity for the ‘Printed Path’ organisers to include Mark Fisher talking about hauntological music, with extracts from Brian Eno and the Belbury Poly, both of whom I have talked about here before. The Tate event also included Iain Sinclair (always good value), Geoff Dyer (also excellent), Marina Warner and her colleague from Essex University, Philip Terry, who has taken an Oulipian strategy from Queneau’s Morale Élémentaire and applied it to landscape. Terry’s Elementary Estuaries are a string of brief descriptors like a text piece by Fulton or Long - they can be seen at the V&A site.

One of the themes of the day was the notion of travelling the landscape in the footsteps of a writer. This is what Macfarlane is now doing in the case of Sebald and he’s hardly the first - I myself once went on a trip to Suffolk searching for Sebaldian locations like Dunwich beach (see my photograph below). At the Tate, Iain Sinclair talked about the walk he wrote about in The Edge of the Orison, following John Clare’s ‘journey out of Essex’, Geoff Dyer described his disappointment on finally finding D H Lawrence’s house in Sicily, Alec Finlay read a poem about his trip to the remains of Wittgenstein’s home in Norway, and Brian Dillon related his attempt to trace Robert Smithson’s Monuments of Passaic. Dillon’s article describing this trip is referred to in an interesting blog, New Jersey as an Impossible Object. I may expand in this blog on some of the themes covered in ’The Printed Path’ when I have a bit more time...

The thought of a Millais retrospective hardly sets the pulse racing, but as I was in Tate Britain on Wednesday I had a look around. The last room covers ‘The Late Landscapes’: ‘Millais’s affection for the Highlands of Perthshire was most brilliantly expressed in a series of twenty-one large-scale landscapes that he painted outdoors from 1870 to 1892’. He said: “Scotland is like a wet pebble, with the colours brought out by the rain.” In the opinion of the curators these paintings ‘represent new approaches to landscape: through poetic references, novel compositions, celebrations of autumnal scenery and light, and unresolved narratives’. They are indeed interesting, although perhaps not quite as interesting as this description implies; the exhibition is rather marked by hyperbole and I note that an article in the Telegraph earlier this year was headlined ‘Tate plans retrospective to rehabilitate Millais’.

Wordsworth, Tennyson, Shakespeare, Donne and Cardinal Newman are all quoted in the titles or subtitles of these late landscapes; The Sound of Many Waters, for example, is a reference to The Dream of Gerontius. One of the paintings that struck me particularly was Dew-Drenched Furze (1890), which reminded me of a morning walk I once took in the Cairngorms (see photograph below). The title comes from Tennyson’s In Memoriam:


And on these dews that drench the furze,
And all the silvery gossamers
That twinkle into green and gold 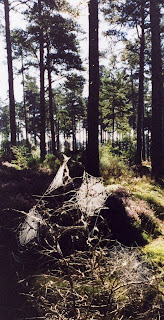 The quiet of the sky

In his chapter on 'The Picturesque Environment' in The Song of the Earth, Jonathan Bate quotes Adorno: 'If you exclaim "what a sight!" in some natural setting, you detract from the beauty by violating the silence of its language'.

For Bate, 'the impossible task of the ecopoet is to speak the silence of the place'. He thinks Wordsworth got close in 'Lines written a few miles above Tintern Abbey' which goes 'beyond the enumeration of picturesque beauties to a wholly felt, but perforce not fully describable sense of 'the indeterminate quality of things.'' (The last phrase is Valery's, quoted by Adorno: 'the beautiful may require the slavish imitation of the indeterminable quality of things.') In the lines below, Wordsworth sees the landscape but connects it to the silence of the sky:

Once again
Do I behold these steep and lofty cliffs,
That on a wild secluded scene impress
Thoughts of more deep seclusion; and connect
The landscape with the quiet of the sky.

As Jonathan Bate says, 'the picturesque looks, the ecopoetic connects.'
Posted by Plinius at 12:33 pm No comments:

Light and shadow in a far north landscape

One of my favourite writers on landscape is the prolific John Dixon Hunt. There is a short US radio programme, 'Milestones of the Millenium' in which he talks Lisa Simeone through the history of pastoral music. The recording is a bit odd as some of the recordings are cut short, but you get a few bursts of nature, like the sheep in Richard Strauss's Don Quixote, and music inspired by landscapes like Tales from the Vienna Woods by Johann Strauss.

Peter Maxwell Davies gets a brief mention near the end of this programme, which set me thinking about landscape elements in his work. He is described here as a "probing, meditative, ecological symphonist " whose work changed "in the 1980s in conjunction with his move from London to the Orkney Islands in the North Sea... Davies has developed a sense of musical pulse, long illusive melodic line, and textural counterpoint, within the context of sweepingly architectured movements, which seeks to find musical representations for the actions of waves, winds, clouds and the startling effects of light and shadow in a far north landscape." The music is not easy to get to grips with at first, but "on repeated returns and further listenings, like the northern landscapes that so intensely ground the entire sound world Davies is evoking, slowly-ever so grudgingly-ever so stingily-the rich textural beauties, the haunting whiffs of melodic line, the luxuriant soundscapes of kaleidoscopic colors reveal themselves."

In an interview here Maxwell Davies describes the effect of the isolated landscape: 'With nobody around, he says, "you can project the structure of what you're working on out of your head and on to the landscape. You're walking through a three-dimensional architecture of your music. You hear the whole thing happening in slow motion, and you can shift things around."'

What I really wanted to do here was give a link to his website and see what he has to say about landscape there. There are tantalising mentions of it online e.g.: 'he has a pretty good website .... In addition to the usual bio stuff he has info and photos of the Orkneys, his adopted home.... A few years ago he traveled to Antarctica to write his Symphony no.8 "on location" and the account he wrote is quite fascinating, especially for his description of the unique sonic landscape he experienced there.' But sadly these links don't seem to work! I'll leave them here though in case its a temporary problem and they are restored.

Postscript 2014: I have just revisited this post and see that the Maxwell Davies website is now working.  I have can't see a set of Orkney photographs but the Antarctic Diary is there.  There is a stern copyright warning at the end so I'm a bit nervous about fair-use quoting it at all, but here is one sentence to give you an idea...  "There is almost no wind, but occasionally an astonishing sound whistles gently from the peaks to the south, almost subliminal at first, but growing into an alto-flutish lament that resonates somewhere between your ears, then reveals its true origin when a high and complex counterpoint, suggesting ghostly oriental flutes, creates a sonorous wandering difference - tone, softly pulsing across the whole ice shelf."
Posted by Plinius at 9:00 pm No comments:

I have been in Copenhagen where I took a look at the Danish Golden Age landscapes in the Carlsberg Glyptotek. The galleries start with Eckersberg ("the father of Danish painting") and then move onto the oil sketches and paintings by his pupils and successors, where one can't help gloomily noticing how young many of the artists were when they died (Eckersberg outlived most of them). Christen Købke for example (who died in 1848 age 37) painted some really striking landscapes in a palette of pale peach and plum (I'm afraid these adjectives don't do justice to the paintings' melancholy moods). Two are on show at the Glyptotek: Autumn Morning on Lake Sortedam and Autumn Landscape. Frederiksborg Castle in the Middle Distance. I see from this blog that the former has been assigned to the Danish canon of 'monuments of national importance and priceless value for Danish culture'... Another of Købke 's autumn paintings is reproduced below.

Posted by Plinius at 9:56 am No comments:

If I'd had more time I could have photographed the grykes at Malham (see previous posting) and come up with something like Olafur Eliasson's The Fault Series (2001). This is one of several sets of photographs where Eliasson comes close to 'traditional' landscape art: others can be seen on his website. Of course Eliasson is keen not to be seen as simply the latest kind of Scandinavian nature worshiper and his works, including the popular Tate Modern installation, The Weather Project, are just as much about science, technology the phenomenology of space. For me Eliasson's photographs are reminiscent of Roni Horn's, a fairly obvious observation given that they both use the landscape of Iceland. There is a review of an exhibition of his photographs here: ''Eliasson says his work is about people -- an assertion that's obvious in his installations but less so in his largely unpopulated photographs. But the photo series are about the artist moving through the landscape and sharing his experience with the viewer, which is similar to the way his installations construct an environment to be experienced."
Posted by Plinius at 8:13 pm No comments: