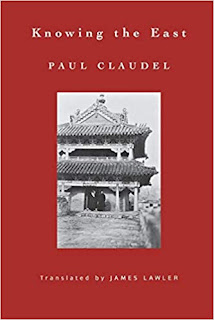 Paul Claudel (1868 - 1955) joined the French Ministry for Foreign Affairs after university, where he had begun writing poetry and attending Mallarmé's 'Tuesdays', and in 1895 was made vice-consul in Shanghai, following junior postings in Boston and New York. He would spend the rest of his life as a prominent diplomat and writer, although I suspect that in England he is a lot less well known than his sister Camille (portrayed in the 1988 film Camille Claudel by Isabelle Adjani). When he arrived in the Far East he began composing prose poetry; the first one was written in Ceylon before he reached his destination in China. Some of these poems were sent home and published in outlets lke La Revue de Paris and La Revue blanche. Claudel returned in 1899 intending to become a priest, and his book Connaisance de l'Est came out in 1900. But having abandoned his religious vocation and returned to China, he supplemented this volume with a smaller group of poems written in the period up to 1905.

No doubt Knowing the East can be read critically in terms of Orientalism and French imperialism, but I found a lot of beauty in these poems. Some titles: 'The City at Night', 'Sea Thoughts', 'The Sadness of Water', 'Noon Tide', 'Hours in the Garden', 'Libation to the Coming Day'. Things I was reminded of as I read them: Baudelaire, Rimbaud, Francis Ponge, Lafdacio Hearn, Victor Segalen, Empire of Signs, Invisible Cities. This quote, from their translator James Lawler, summarises my first impressions of the book.

'With what pleasure do we savour these landscapes, this continent so far removed from our own: coconut palms, banyans, Japanese pines; the Yang-tse of 'Drifting', 'The River', 'Halt on the Canal'; Confucian, Buddhist, and Shinto temples and tombs; hermitages, suspended houses; crushing heat, night as clear as day; festivals for the dead, a festival for the rivers; wheat harvests, rice harvests; torrential rain, apocalyptic storms; cities that seem chaotic but have a concealed pattern and sense, 'flayed' Chinese gardens, the Shogun's golden ark. One may label the images picturesque but that is not the way I read them. I recall Julien Green saying of Claudel that he was a man "who had known how to live elsewhere," words I take to mean that we do not find a quest for oddness but affectionate deployment fold by fold of a reality the poet comes to know.'

In keeping with the theme of my blog, here are a few examples of how Claudel treats landscape in his poems: