Look into the cataract 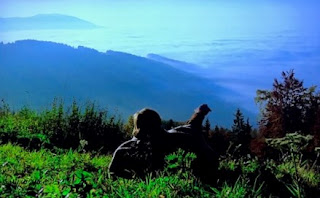 I've been a bit short of time recently so here is just a brief post to share a clip from YouTube of the beginning of Werner Herzog's Heart of Glass (1976). Embedded clips like this usually disappear after a while so I am also including some still images from the film too. The Rückenfigur looking over the Bavarian Alps is the herdsman Hias, a character based on the legendary Bavarian prophet, Mühlhiasl who had Nostradamus-like visions of the future.  The second one shows clouds flowing over the mountains, a scene Herzog and his crew filmed frame-by-frame.  These mountains formed the landscape of Herzog's childhood, living until the age of twelve in a remote village which his mother had taken their family to after the house next door to theirs in Munich was bombed in an Allied raid. 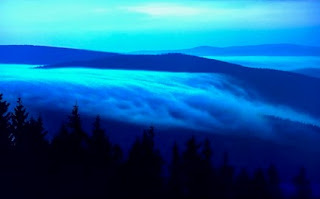 After these views of the mountain landscape where the film's story is set (just after the end of the clip embedded here), there is a sequence of stranger, more dream-like images of flowing water. These are supposed to put the viewer into a kind of trance, like the villagers in the story who talk and act as if in a waking dream - Herzog got all his actors to perform under hypnosis, with the exception of Josef Bierbichler who plays Hias (for more on this, see the book Werner Herzog and the making of 'Heart of Glass'). Over the waterfall footage you hear a voice in German: "I look into the cataract... I feel an undertow... It draws me, it sucks me down..."  As this is happening, Popul Vuh's music gently plays in the background.  Herzog described the effect of concentrating intensely on this imagery.  It "gives you a lift as if the waterfall was standing still and you start to float upwards. It's a little but like the effect of staring from a bridge into a river and all of a sudden you start to float..." 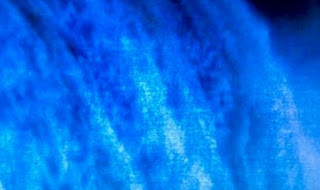 Posted by Plinius at 1:03 pm No comments: