I made those waters flow over it 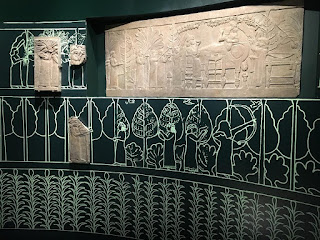 I am returning here to a subject I covered over ten years ago, the gardens of the kings of Assyria, because I have been to see the British Museum's exhibition, 'I am Ashurbanipal'.  I ended my previous post by referring to a relief dated 645 which shows King Ashurbanipal and his Queen in the royal park in Nineveh, dining under an arbour of grape vines, with the decapitated head of the conquered king of the Elamites hanging from a nearby tree.  This scene is on show in the current exhibition, mounted with other smaller ones to show how a complete wall might have looked.  You can see this in my photograph above, which I think also gives an indicates of how wonderfully well lit everything is.  The garden landscape in which Ashurbanipal is seen drinking and listening to music contains alternating pine and fruit-bearing date palms, perhaps symbols of Assyria and Babylonia respectively.  And in the foliage, a bird goes after a locust - in his annals, Ashurbanipal likened the Elamites to a swarm of locusts. 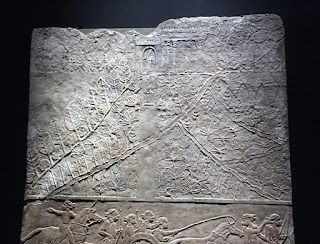 This second photograph shows the royal park created by Ashurbanipal's grandfather Sennacherib, which I also mentioned in my earlier post.  In the new exhibition, coloured light is projected onto this relief, picking out the irrigation channels and trees.  You can see the effect in a gif at the British Museum blog site. I will quote here what this site has to say about the landscape:


'The gardens at Nineveh were irrigated by an immense canal network built by Ashurbanipal’s grandfather, Sennacherib. He brought water to the city over a great distance using channels and aqueducts to create a year-round oasis of all types of flora. The canals stretched over 50km into the mountains, and Sennacherib boasted about the engineering technology he used. A monumental aqueduct crossing the valley at Jewan, which you can still see the remains of today, was made of over 2 million stones and waterproof cement. The aqueduct was constructed over 500 years before the Romans started building their aqueducts, and was inscribed with the following words: "Sennacherib king of the world king of Assyria. Over a great distance I had a watercourse directed to the environs of Nineveh, joining together the waters… Over steep-sided valleys I spanned an aqueduct of white limestone blocks, I made those waters flow over it."

Since I wrote my last blog post on the gardens at Nineveh, it has been argued that they were in fact 'the real Hanging Gardens of Babylon'.  Archaeologist Stephanie Dalley first formulated this theory in 1992 and then published a book with new research in 2013.  A Channel 4 documentary was made and her new evidence was widely reported in the news.  It would obviously be helpful to do some more digging, but the site of Nineveh, around Mosul, has been too dangerous to excavate.  Dalley was quoted in 2013 as saying she thought it unlikely that excavations would be possible in her lifetime.  A year later, Daesh overran the area and, as Jonathan Jones says in his review of this exhibition, 'they smashed antiquities in the Mosul Museum and set about demolishing Nineveh itself.'  It is sad to think how much can change in the course of a few years, but at least these remarkable artifacts remain to give us, amongst much else, an idea of the gardens created by the kings of Assyria.
Posted by Plinius at 4:53 pm No comments: 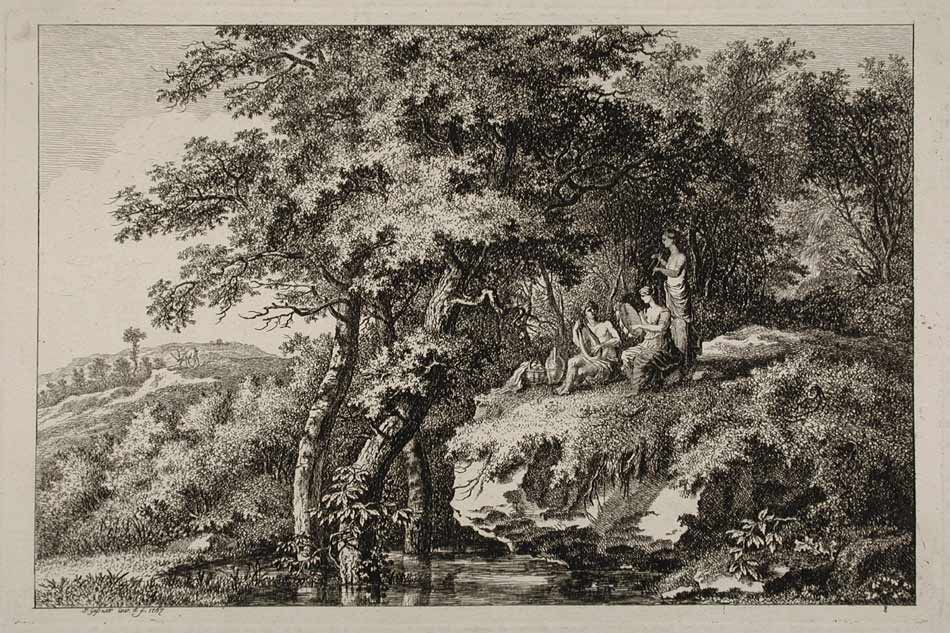 My post yesterday was about a nineteenth century French-speaking Swiss writer from Geneva; this one is about an eighteenth century German-speaking Swiss poet from Zurich.  However, as can be seen above, Salomon Gessner (1730-88) was also a visual artist.  Here is a snatch of his poetry, describing autumn. It is taken from an 1809 translation of Gessner's Idylls (1756-72).  According to the Encyclopedia Britannica, 'his pastorals were translated into 20 languages, including Welsh, Latin, and Hebrew. The English translation ran through many editions and was admired by the Romantic writers Sir Walter Scott, Lord Byron, and Wordsworth.'  However, I see from Wikipedia that 'The New International Encyclopædia (1905) finds his writing “insipidly sweet and monotonously melodious,” and attributes Gessner's popularity to the taste of a generation nursed on Rousseau.'


O'er every vine of gold and purple hue
The sun its animating lustre threw;
And every curling branch, whose friendly shade
Waved o'er his cot, beneath the zephyr play’d.
Clear was the sky, o'er all the valley's bed
The low-land vapours like a lake were spread;
Amidst whose floating surface lightly rear'd
The mountain tops, like little isles appear'd;
Where smoaking huts and fruitful groves were seen
In autumn's richest vest of gold and green. 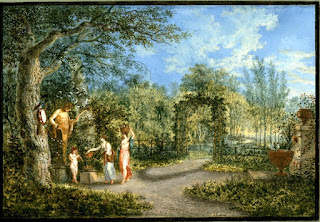 Salomon Gessner, Pastoral landscape with two women and a boy
playing a flute in front of a herm of Pan, 1787

Gessner was on my mind today as I saw the painting above in the British Museum.  It was in the Prints and Drawings room, in a display of art linked to the sketch by Joseph Anton Koch they recently purchased from the Brian Sewell estate (see my post on it last year).  Gessner's painting was the basis for an 1805 etching by another artist I have discussed here before, Carl Wilhelm Kolbe.  The British Museum also owns an etching by Kolbe of the memorial to Gessner which stands in Zurich's Platspitz Park.  In it, 'a well-dressed couple and child looking at Gessner's tomb in the form of a Greek memorial with a low relief sculpture, set behind a railing in woodland.' 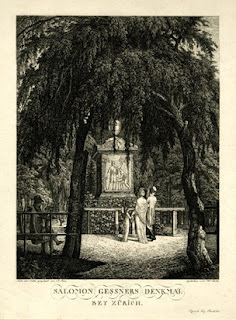 In their current exhibition, the British Museum curators have put Gessner's Pastoral Landscape on show next to a different memorial to Gessner, this one by Johann Heinrich Bleuler.  The etching was published in the year of Gessner's death and shows a memorial to him situated by a lake.  Was it imaginary, like Caspar David Friedrich's proposal for a monument to Goethe?  If not, is there still something resembling this at Lake Klöntal, a permanent presence of a landscape painter in the landscape he painted?  Yes, it would seem there is, according to the local tourism website and you can do a nice walk to it. They describe the origin of the inscription thus: 'Sie wurde ihm von zwei Verehrern gewidmet, die sich 1788 zur Einweihung des Gedenksteins mit Tränen in den Augen um den Hals fielen und küssten.' ('It was dedicated to him by two devotees who fell around the neck and kissed each other in 1788 with tears in their eyes for the inauguration of the memorial stone' - Google Translate). The writing looks quite amateurish and crudely done, but clearly those admirers meant well. 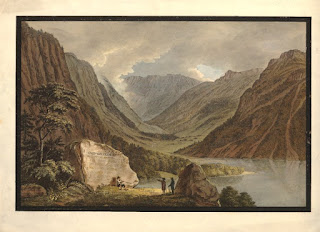 A fine rain was falling

'Any landscape is a condition of the spirit.' -  Henri-Frédéric Amiel

This is one of those quotes about landscape you come across in a diverse range of books.  It is also available in tweet-friendly images, such as the one below where it is superimposed on a mountain scene.  This longer version is from the translation of Amiel's Journal Intime, published in 1885 by the British novelist Mrs. Humphry Ward.  The whole book can be found on Project Gutenburg, so I have copied from there below the journal entry where Amiel makes his observation.  As can be seen, it was prompted by an autumn day, with leaves on the ground and a few flowers lingering in the garden.  The mountains in the distance were the Alps - Lancy is part of Geneva, the city where Amiel was born and died.  This entry was written when he was thirty-one.  He was a poet and a philosopher but this journal only appeared posthumously. 'It reveals,' according to the Encyclopedia Bitannica, 'a sensitive man of great intellectual ability, struggling for values against the skepticism of the age. Widely translated, it gained Amiel lasting fame.' 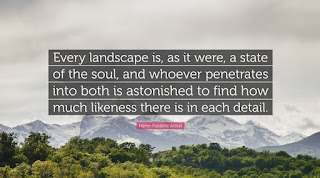 October 31, 1852. (Lancy.)—Walked for half an hour in the garden. A fine rain was falling, and the landscape was that of autumn. The sky was hung with various shades of gray, and mists hovered about the distant mountains, a melancholy nature. The leaves were falling on all sides like the last illusions of youth under the tears of irremediable grief. A brood of chattering birds were chasing each other through the Shrubberies, and playing games among the branches, like a knot of hiding schoolboys. The ground strewn with leaves, brown, yellow, and reddish; the trees half-stripped, some more, some less, and decked in ragged splendors of dark-red, scarlet, and yellow; the reddening shrubs and plantations; a few flowers still lingering behind, roses, nasturtiums, dahlias, shedding their petals round them; the bare fields, the thinned hedges; and the fir, the only green thing left, vigorous and stoical, like eternal youth braving decay; all these innumerable and marvelous symbols which forms colors, plants, and living beings, the earth and the sky, yield at all times to the eye which has learned to look for them, charmed and enthralled me. I wielded a poetic wand, and had but to touch a phenomenon to make it render up to me its moral significance. Every landscape is, as it were, a state of the soul, and whoever penetrates into both is astonished to find how much likeness there is in each detail. True poetry is truer than science, because it is synthetic, and seizes at once what the combination of all the sciences is able at most to attain as a final result. The soul of nature is divined by the poet; the man of science, only serves to accumulate materials for its demonstration. 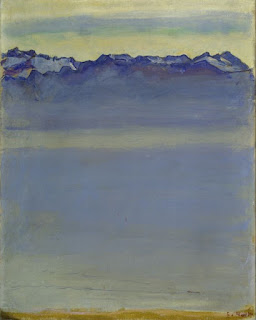 Mrs Ward's translation of Amiel's Journal was reviewed and praised by the great Victorian critic, Walter Pater.  He quotes Amiel's statement about landscape and the soul in this review (which can be read online).  He also observes that although 'in Switzerland it is easy to be pleased with scenery', there are passages of natural description in Amiel that 'rise to real distinction.'   He gives three examples, on the effects of fog, frost and rain, and I will close here by quoting the last of these:


August 22, 1873. (Scheveningen).—The weather is rainy, the whole atmosphere gray; it is a time favorable to thought and meditation. I have a liking for such days as these; they revive one’s converse with one’s self and make it possible to live the inner life; they are quiet and peaceful, like a song in a minor key. We are nothing but thought, but we feel our life to its very center. Our very sensations turn to reverie. It is a strange state of mind; it is like those silences in worship which are not the empty moments of devotion, but the full moments, and which are so because at such times the soul, instead of being polarized, dispersed, localized, in a single impression or thought, feels her own totality and is conscious of herself. 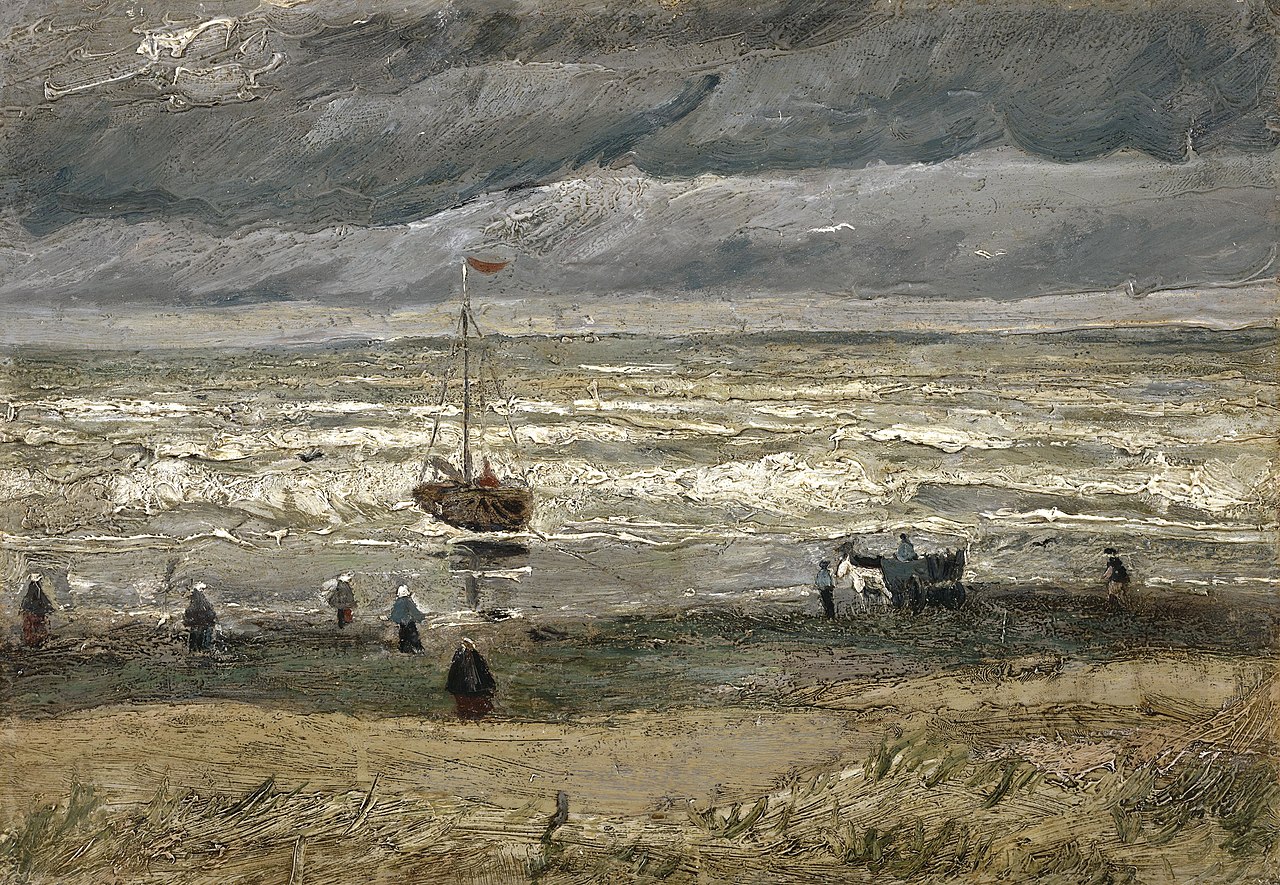