I have not had a chance to say anything here yet about the Dulwich Picture Gallery's Eric Ravilious exhibition.  Reviewers loved it: Laura Cumming described the paintings as 'exhilarating, enthralling and outstandingly beautiful', Martin Gayford thought them 'irresistible' and Richard Dorment found them 'a joy from start to finish'.  From a landscape perspective he is fascinating, with those subtle distortions, unusual textures and patterns, curious perspectives and framing devices all combining to give the paintings their unique and hard-to-define quality.  The exhibition included the full range of his war paintings - submarine interiors, fortified beaches, aircraft in flight and remarkable visions of ships illuminated by the Arctic sun which suggest what he might have gone on to paint if he had not been on the air-sea rescue plane that disappeared off the coast of Iceland in September 1942.  It was easy to turn from these and enjoy watercolours from the 1930s of fireworks, flowers and fields.  Tea at Furlongs seemed relatively uncomplicated, with its tasty-looking spread and view of the countryside: 'beyond the garden wall the wheat is almost ready to harvest , and Beddingham Hill rises to meet a sky as yet untroubled by hostile squadrons.'  However, as James Russell goes on to say in the catalogue, the oddities of light and perspective suggest a scene that was 'designed to be remembered - not any old tea at Furlongs but the last, the tea that must be preserved against all eventualities.'

At Furlongs, Ravilious was a guest of Peggy Angus, whom he had met when they were students at the Royal College of Art.  She had left London in 1933 to teach in Sussex and found a tenant farmer willing to let her rent a cottage with a spare room, next door to a ploughman who appears in some of Ravilious's paintings.   Life there, Russell writes, 'involved a good day's work, scratch meals and long evenings of music and song.  Water had to be hauled out of a well and amenities consisted of a primitive stove for cooking and an earth closet in the garden.'  Furlongs is quite a long walk from any main road but my parents went to look at it this summer and have sent me the photographs below.  Apparently the current owners are building a new wall, perhaps prompted by the increase in visitors as Ravilious's popularity continues to grow.  This cottage has an important place in British art history as the inspiration for some of Ravilious's best known work, like Train Landscape and The Wilmington Giant.  'Furlongs', he wrote, 'altered my whole outlook and way of painting, I think because the colour of the landscape was so lovely and the design so beautifully obvious...' 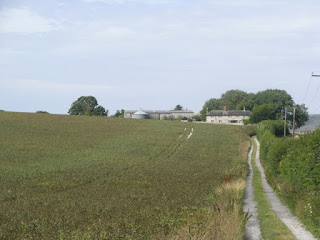 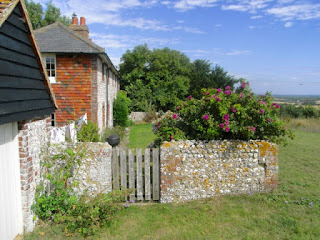 The viewer has to get his eye in first. Ravilious' oddities of light and perspective, as well as his unusual textures and patterns, are not what we might expect from the 1930s and early 40s. I too wonder what he might have achieved, had his life not been cut so brutally short.

I enjoyed the Dulwich exhibition, but -- like so many shows these days -- it was too crowded to get a proper longer long look at the work. It also made me wonder whether his work actually looks *better* in reproduction...

It always amuses me, to think of the way the current owners of properties like Furlongs (whom I would -- probably unfairly -- caricature as wealthy, shire-Tory types trying to buy themselves some privacy) discover there is an endless succession of rambling aesthetes peering into their designer kitchen.

Yes it was busy when we went, although they did have a queueing system to enter. Emily Carr earlier this year was busy too - Dulwich keep putting on really appealing exhibitions! They have an M. C. Escher exhibition coming next which should be busy, unless the people who like Escher are not the people who like going to art exhibitions at places like Dulwich (I imagine his work would look much the same reproduction, and there's been a great deal of reproduction over the years.)