Loss of the Rhône 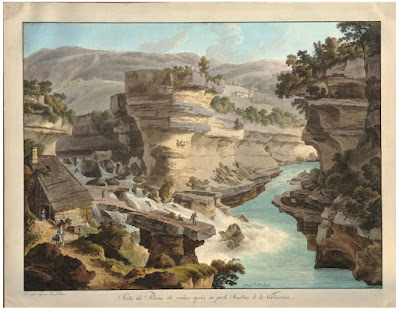 Jean-Antoine Linck, The confluence of the river Valsereine with the river Rhône, c. 1800-20

The British Museum currently has a small temporary exhibition, 'Enticing Peaks Swiss prints from the Lloyd Bequest'. It is confined to part of one room and so they don't have space for more than a tiny fraction of the 'collection of over 5,000 Swiss prints and books' amassed by Robert Wylie Lloyd (1868-1958). Sadly  there are no books on display, but there are some interesting landscapes, like the one above by a Swiss artist whose work was very popular at the time. Of course some of these Alpine views have changed significantly in recent years with the retreat of the glaciers, although this one was already altered by the construction of a dam. The BM's curators explain:

'This print represents a phenomenon known as the ‘Perte du Rhône’ (‘Loss of the Rhône’) near Bellegarde, France, which today no longer exists. In the dry season, the Rhône used to plunge into an underground gorge ninety metres deep, emerging downstream close to the confluence with the river Valsereine. The river is seen here appearing from its subterranean passage. Platforms were created for visitors to view the thundering river emerging from below ground. The construction of the Génissiat Dam south of Bellegarde in 1948 transformed the underground section of the Rhône into a reservoir, just over twenty kilometres in length.' 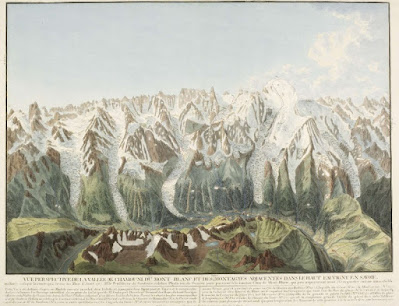 Christian von Mechel, Bird's Eye View of the Mont-Blanc Massif above the valley of Chamonix, 1790

Another print (above) was produced by a Basel print shop owner in 1788 to commemorate the ascent of Mont Blanc a year earlier by pioneer Alpinist Horace Bénédict de Saussure. This interested me because it was based not on direct observation of the mountains but on a model of the landscape.

'The model was produced in relief by Charles-François Exchaquet (1746-92), a Swiss engineer, cartographer and keen mountaineer, who sold his models in different sizes, together with rock specimens from the area, across Europe. Today, five are known to have survived, including one in Haarlem (Teylers Museum) and another in Geneva (Swiss Alpine Club). The long inscription provides information about Exchaquet’s model, and refers to the main peaks, glaciers and refuge huts. The red line shows the route taken by de Saussure for his ascent in August 1787.'

I have looked on the Teylers Museum website and their photograph of this model makes it look less impressive than you might imagine (then again, I guess you wouldn't expect tourists to carry home with them huge table-top relief sculptures). Here's their description of it (I used Google translate from the Dutch):

'The relief consists of nine glued blocks of wood that were chiselled into the correct relief, modelled with plaster and covered with crushed quartz to represent the glaciers. ... It is unknown how many models were made. The model was donated in 1799 by the Amsterdam merchant Govert Lups.'

The Teylers Museum's director Martinus van Marum apparently made a trip through Europe in 1802 and visited the son of de Saussure. He bought 'a fine collection of his father's rocks from him, including the top of Mont Blanc, the highest piece of rock found just below the ice cap.'

Posted by Plinius at 9:52 am No comments: