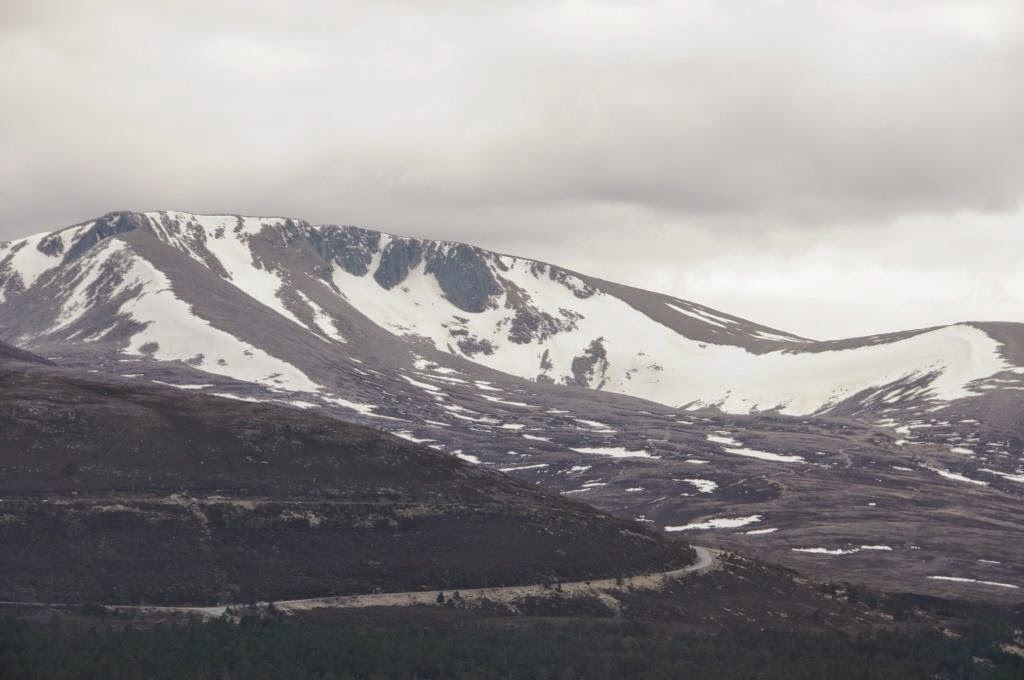 We spent last weekend at a remarkable wedding in the Cairngorms National Park. I'm not sure if I was technically 'in the Cairngorms', in the Nan Shepherd sense, as we didn't get to explore the mountains. However, as Robert Macfarlane has often pointed out, climbing to a summit was not for Shepherd the way to experience this landscape.  I've been reading her poems, originally published in 1934 and reprinted last year.  In the Cairngorms is a rather uneven collection: some poems shine out as brightly as when they were written, others are dulled with old-fashioned language (was hers the last generation to use 'thy' and 'thou'?)  Four are written in the Scots dialect Doric; for Robert Macfarlane these poems, which 'stud the book like garnets in granite', best exemplify her sense of the hills as both unsettling and enfolding.

In these poems the elements are never entirely stable.  They change places and touch each other, unifying everything that can be perceived and felt in the landscape.  Light is the substance of the mountains; a loch is 'bricht, an' bricht, an' bricht as air'; the shadows of rocks are like the smoke from a bonfire.  In one poem 'air is tinged with earth', in another it is hard to tell a distant, tremulous blue hill from a morning star, vanishing in the morning light.  At dawn, a flooded landscape is 'unsubstantial blue', 'uncertain, half like dew / and half like light withdrawn.'  After the rain, clouds 'plod to the slouch of the wind their drover', stars process across space, 'boats come in from the width of the ocean.'  Water resembles 'clear deeps of air, / light massed upon itself', and tumbles in 'cataracts of wind' that crash in the corries.

Robert Macfarlane finds echoes of Nan Shepherd's poems in the prose of The Living Mountain.  Her chapter on water, for example, explains the transparency of the Cairngorms' burns, undarkened by peat, which the poems describe as 'fiercely pure' and flowing with a 'glass-white shiver'.  When the water has a colour at all it is 'a green like the green of winter skies, but lucent, clear like aquamarines, without the vivid brilliance of glacier water.  Sometimes the Quoich waterfalls have violet playing through the green, and the pouring water spouts and bubbles in a violet froth. ... In summer I have stood on the high buttress of Ben a' Bhuird above the Dubh Loch, with the sun striking straight downwards into its water, and seen from that height through the water the stones upon its floor.' 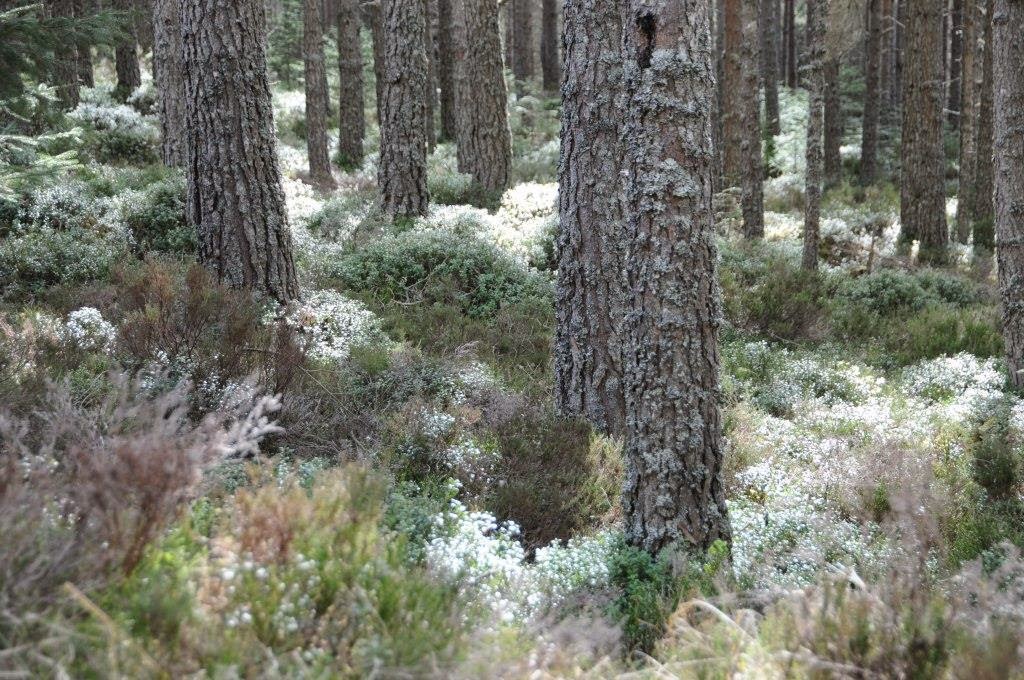 Posted by Plinius at 9:38 pm No comments:

A landscape of touch and double-touch 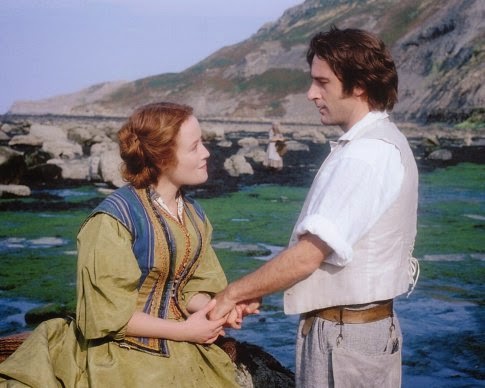 These two fictional nineteenth century poets in A. S. Byatt's novel Possession (1990) both draw inspiration from nature.  In one brief, intense summer they explore together the coast and moors of Yorkshire.  They write under the influence of Lyell and Ruskin but, like their Romantic predecessors, they are fascinated too with myths of metamorphosis, animism and elemental forces.  The poems of Christabel LaMotte (her name recalls Coleridge's poem 'Christabel' and the author of 'Undine', Friedrich de la Motte Fouqué) become, by the time the contemporary sections of the novel are set, the subject of close readings by feminist scholars.  One such critical study is read by Possession's unassuming hero, a lowly 1980s academic called Roland, just before he sets off to retrace the poets' journey north.  It leaves him with a vision of a land 'covered with sucking human orifices and knotted human body hair.'  I'd like to quote a paragraph here because, even as an amusing parody of academic writing, it is interesting on writing and landscape.  Byatt's novel is full of such extracts from fictitious poems, letters and journals.  Here, places reimagined by nineteenth century novelists are reinterpreted a century later by an American scholar who is herself merely a fictional character in Possession - nature transformed and distorted through three cultural filters.


'And what surfaces of the earth do we women choose to celebrate, who have appeared typically in phallocentric texts as a penetrable hole, inviting or abhorrent, surrounded by, fringed with-something? Women writers and painters are seen to have created their own significantly evasive landscapes, with features which deceive or elude the penetrating gaze, tactile landscapes which do not privilege the dominant stare. The heroine takes pleasure in a world which is both bare and not pushy, which has small hillocks and rises, with tufts of scrub and gently prominent rocky parts which disguise sloping declivities, hidden clefts, not one but a multitude of hidden holes and openings through which life-giving waters bubble and enter reciprocally. Such external percepts, embodying inner visions, are George Eliot's Red Deeps, George Sand's winding occluded paths in Berry, Willa Cather's cañons, female-visioned female-enjoyed contours of Mother Earth. Cixous has remarked that many women experience visions of caves and fountains during the orgasmic pleasures of autoeroticism and shared caresses. It is a landscape of touch and double-touch, for as Irigaray has showed us, all our deepest "vision" begins with our self-stimulation, the touch and kiss of our two lower lips, our double sex. Women have noted that literary heroines commonly find their most intense pleasures alone in these secretive landscapes, hidden from view. I myself believe that the pleasure of the fall of waves on the shores is to be added to this delight, their regular breaking bearing a profound relation to the successive shivering delights of the female orgasm. There is a marine and salty female wave-water to be figured which is not, as Venus Anadyomene was, put together out of the crud of male semen scattered on the deep at the moment of the emasculation of Father Time by his Oedipal son. Such pleasure in the shapeless yet patterned succession of waters, in the formless yet formed sequence of waves on the shore, is essentially present in the art of Virginia Woolf and the form of her sentences, her utterance, themselves. I can only marvel at the instinctive delicacy and sensitivity of those female companions of Charlotte Bronte who turned aside when she first came face to face with the power of the sea at Filey, and waited peacefully until, her body trembling, her face flushed, her eyes wet, she was able to rejoin her companions and walk on with them.'

Email ThisBlogThis!Share to TwitterShare to FacebookShare to Pinterest
Labels: seas, the body

I have just finished reading Nicolas Bouvier's Japanese Chronicles (1989, translated by Anne Dickerson) a compilation of travel sketches based on his experiences in the country between 1955 and 1970.  Bouvier spent some time in the northern island of Hokkaidō, a little more than twice the size of his native Switzerland, just then becoming popular with younger Japanese tourists.  Older Japanese, he observed, 'will never go there and don't think much of it.  This island has no prestige in their eyes because it has almost no history ... this neglect has lasted for a thousand years.'  Thus one cannot find old Japanese poems and paintings devoted to Hokkaidō's most beautiful views, but this has not stopped experts codifying their qualities for tourists.  Lake Mashū is an almost pristine volcanic lake, once (according to a measurement taken in 1931) the clearest in the world, although its transparency was reduced with the introduction of sockeye salmon and rainbow trout in the fifties.  Bouvier went to see it in the late sixties:


'Mashū-ko lake lies in a crater dominated by another crater that resembles a felt hat that has been crushed by a fist.  A little like the lakes in the Swiss mountains, but wilder, with the ambiguity a volcano adds to the landscape. In the middle, a small island.  No sign of inhabitants, but an observation platform for tourists where, on Sundays in August, you can hear Osanai de kudasamaise (Be so good as not to push).  There are two other lakes in the area that rival this one, but the Mashū-ko lake is sought after for its 'mystical' or mysterious ambience (I think that it is better to understand the word shimpiteki in the first sense) - no doubt because some authority in matters of landscape has said so.  I am the only foreigner.
'Do you find the lake mystical?' someone asked me.
'I find it very beautiful, but why mystical?'
'Because a very esteemed professor said so - when will you learn to believe?'
'When? Very good question!'

Nicolas Bouvier is best known for The Way of the World (1963), an account of the journey he made ten years earlier with the artist Thierry Vernet from Yugoslavia to the Khyber Pass.  It contains some remarkable passages of image-rich descriptive writing that seem both densely packed and lightly done. At different points it reminds me of two very different books, On the Road and A Time of Gifts (Patrick Leigh Fermor described it as 'nothing short of a masterpiece').  Vernet's striking Indian ink illustrations punctuate the text and give a sense of the landscapes they encounter (the photograph below shows my copy open at their journey on the road to Anatolia).  Bourier was inspired to travel by his childhood reading - 'at eight years old, I traced the course of the Yukon with my thumbnail in the butter on my toast'.  As the biography in the back of the Eland Press translation says, 'without waiting for the result of his degree, in 1953 he left to join Thierry Vernet in Yugoslavia with no intention of returning.'  The Way of the World covers only the first eighteen months of his travels and it was not until 1956 that he reached Japan (as described in Japanese Chronicles).  He was an advocate of  slow travel and 'proud to boast that it had taken him longer to get to Japan than Marco Polo.' 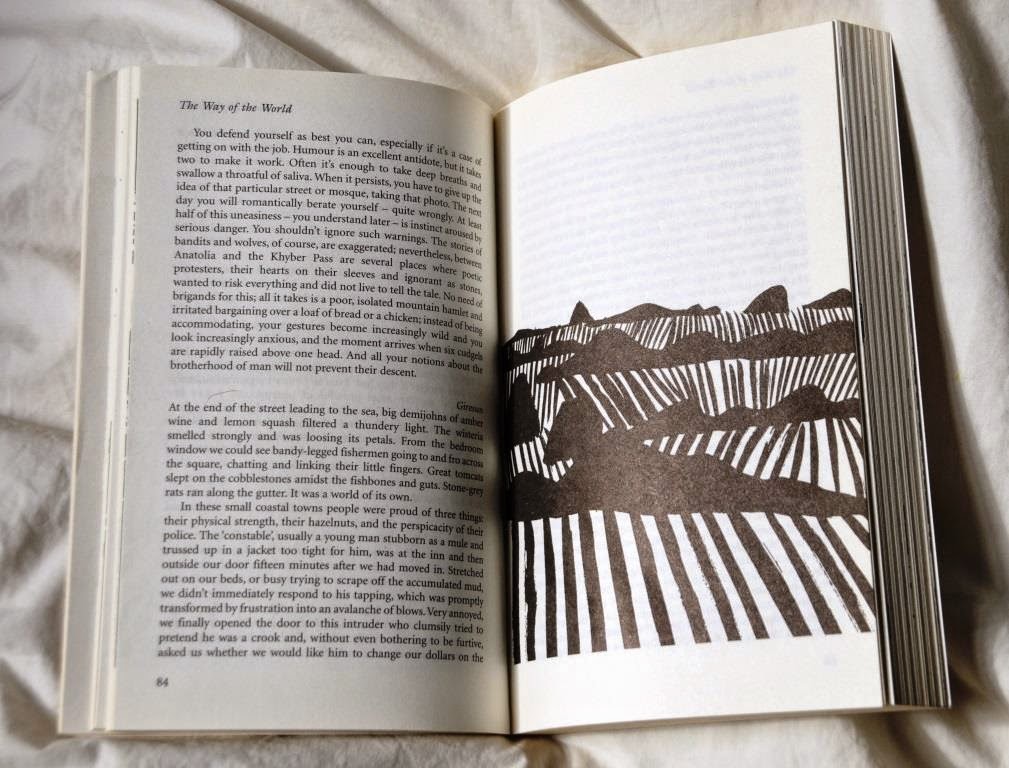 Posted by Plinius at 6:23 pm No comments: