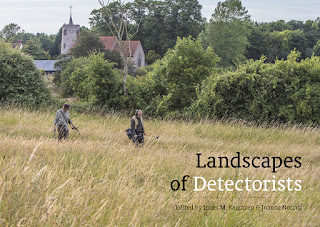 When I look back on this period of lockdown I think the 'highlight' will probably be the fortnight or so we spent as a family watching Detectorists on the BBC iPlayer. What my sons say they most appreciated was the gentle humour and escapism of it, but I suspect too there was something comforting in the idea that historical imagination and curiosity can transform a small stretch of landscape. Despite some sunny weather, this has been another weekend of staying indoors except for the short permitted exercise along familiar streets, and yet each time we walk them we see some new detail in the design of a house or the contents of a garden. Every day I pass a house with a blue plaque to the poet Louis MacNeice but I have long since taken as much interest in the houses surrounding it, wondering about the lives they have contained. The terminus of my regular walk is Canonbury Tower, an old Tudor building once owned by Thomas Cromwell which reminds you of the layers of history anywhere in London.

Last year Colin Sackett's Uniformbooks brought out a book on Detectorists in which four geographers analyse the series in terms of different ways of reading landscape, aspects of verticality, gender roles and the resonance of lost, everyday objects. It is a pleasure to read, although if you have just binge-watched the series you'll find it covering familiar ground. In some ways I was more interested in what writer Mackenzie Crook and producer Adam Tandy had to say about the making of the programmes and the ways in which they made metal detecting more televisual. I didn't realise, for example, that it is best done in autumn or winter on muddy, unattractive ploughed fields - very different from the sunny Constable-like landscapes we see in the series. Crook took up the hobby when he started writing the script and actually managed to find a piece of gold Roman jewellery, which is now in the British Museum. And it was wonderful to learn that one of the more poetic moments in Detectorists had happened to him in real life. One day, while he was out detecting on a farm in Suffolk, he 'dug down four inches to find an exquisite bronze hawking whistle.'

'I took a few minutes to unclog the mud with a piece of straw, then held it up to my lips and blew. The note that issued from the whistle was a ghost, a sound unheard for centuries, and the last person to hear that sound, that exact sound, was the person who dropped it just yards from where I was standing. And it wasn't a faint, feeble ghost either: it was an urgent, piercing shrill that echoed across the field and back through time.'

Posted by Plinius at 9:37 am No comments:

Email ThisBlogThis!Share to TwitterShare to FacebookShare to Pinterest
Location: Danebury

The floating islands of Lake Vadimon 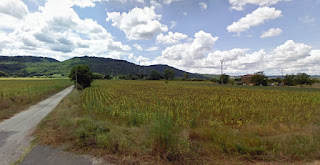 In these interminable lockdown days it is easy to get sick of walking the same streets over and over again. Of course there is always Google Earth, although I always suspect I may not always be looking at wha tI think I am. I thought I would travel in the footsteps of my blog namesake, Pliny the Younger, to the small lake 'called Vadimon'. According to Wikipedia its waters have now almost evaporated - 'the lake is almost completely underground and fed by sulphurous springs that pour milky waters into it'. But is there anything really still to see? Google Maps does show a small blue circle but Google Earth doesn't seem to allow you any closer than the image above (photograph taken in 2011). I think the 'lake' is to the right of the road, somewhere in that field.

Pliny begins his letter by observing that one doesn't have to travel far to see natural wonders, sometimes they are practically on our doorstep. It is a point always worth bearing in mind, although I think I've seen all there is to see within a short Covid-restricted walk from our home. He then describes 'one of these curiosities', a lake

'perfectly circular in form, like a wheel lying on the ground; there is not the least curve or projection of the shore, but all is regular, even and just as if it had been hollowed and cut out by the hand of art. The water is of a clear sky-blue, though with somewhat of a greenish tinge; its smell is sulphurous, and its flavour has medicinal properties, and is deemed of great efficacy in all fractures of the limbs, which it is supposed to heal. Though of but moderate extent, yet the winds have a great effect upon it, throwing it into violent agitation. No vessels are suffered to sail here, as its waters are held sacred; but several floating islands swim about it, covered with reeds and rushes, and with whatever other plants the surrounding marshy ground and the edge itself of the lake produce in greater abundance.'

Pliny then explains how these islands sometimes move in a cluster and sometimes get dispersed, seeming to race each other. Grazing sheep from the surrounding fields board the islands, seemingly oblivious to the fact they have left dry land. The lake empties into a river which,'after running a little way, sinks underground, and, if anything is thrown in, it brings it up again where the stream emerges.' He signs off the letter by saying: 'I have given you this account because I imagined it would not be less new, nor less agreeable, to you than it was to me; as I know you take the same pleasure as myself in contemplating the works of nature.'

On a Winter Morning before Sunrise 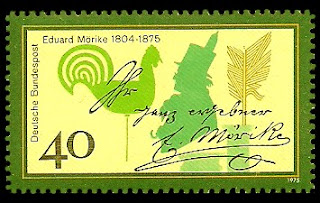 In his poem 'On a Winter Morning before Sunrise', the twenty-one year old Eduard Mörike (1804-75) wrote of his emotions on seeing the first light-as-down light of dawn: 'my soul is like crystal'. He felt his mind still as still water, opened to wonder by a ring of clear blue sky. A perfect way to start the day, certainly better than listening, as I do, to the latest grim news on the radio. The editor/translators of this poem, David Luke and Gilbert McKay, link it to 'Urach Revisited’ (1827), another 'major expression of the poet's youthful sensibility.' Bad Urach is a spa town at the foot of the Swabian Alb where Mörike studied at the evangelical seminary. His nostalgic return as a young man is reminiscent of Wordsworth’s poem on Tintern Abbey. A stream flows heedlessly past without any sorrow at the flux of time and the poet questions the landscape surrounding him:

Here you all are, ancient and new,
Bare sunlit hills uprearing, summits made
For cloud-thrones, woods where scarcely noon breaks through,
Where balmy warmth mingles with deepest shade:
Do you still know me, who once fled to you,
Whose heavy head sweet-slumbrously was laid
Here in cool moss to hear the insects humming –
Do you know me, and shrink not at my coming?

Eduard Mörike wrote one of the stories most special to me, 'Mozart's Journey to Prague' - one I have re-read before in bleak times and found myself reaching for again recently. Although tinged with sadness, because we and the narrator know what will happen eventually to Mozart, it is a story of a brief, idyllic encounter, a moment (in the words of the translators) of 'festivity and conviviality, badinage and Lebenslust, memories of an earlier golden age of culture.' This sparkling novelle is not really about landscape although it begins with Mozart and Constanze journeying through the Moravian mountains. They then descend into a valley and stop at a village and Mozart decides to take a short walk. He enters the park of a local Count, sits down by some orange trees and, with his mind on his music, inadvertently picks one, an action which sets in train the events of the story.

I will end this brief post on Mörike by mentioning a couple more poems on the subject of spring. In 'Frühlingsgefühle', translated as 'Intimation of Spring', violets wake and dream their time is near. It puts me in mind of the crocuses I saw on my lockdown exercise walk yesterday. 'In the Spring' find the poet lying on a hill: clouds drift, rivers flow and sunlight enter his veins. And yet he still feels a yearning, 'for what I cannot say'. It makes him wonder what memories are woven into 'this twilight of the gold-green leaves? / - The nameless days of long ago!'