There is a beautiful watercolour from 1935 in the Dulwich Picture Gallery's Paul Nash: The Elements, called Empty Room.  It shows an ordinary space with a wooden floor, simple skirting board and a Victorian door, just like the room in which I'm writing this.  But a tree stump rises from the floor, cliffs make up the wall to the left, the ceiling merges into a grey sky and a cold sea is visible in the distance.  It is one of several paintings Nash did in which a landscape appears like a dream inside an empty room.  The opening out of an enclosed space seems to imply escape and release, although in this case, as James King has observed, the dead tree and white cliffs are a premonition of death.

In an earlier watercolour shown in the exhibition, Harbour and Room (1931), part of the floor is made up of water and again we are looking not at a blank wall but at the view out to some stationary boats and beyond them the sea.  Nash's wife Margaret recalled that this harbour was Toulon and the idea came from the reflection of a ship in a large mirror in front of their hotel bed.  Andrew Causey has associated this image with a kind of death: 'the waters of unconsciousness invade the room; they are the kind of death that happens at night when the conscious self is resigned to sleep and dream' (1971, quoted in this exhibition catalogue).

A third example, Three Rooms (1937) depicts, sky, forest and water in the midst of three different rooms.  The symbolism in Nash is never straightforward - Andrew Causey sees the top room, with its ceiling open to the sky as having 'a sense of liberation' and the claustrophobic wooded room in the middle as 'a point of birth' - the lowest room, in which the floor leads out towards a setting sun, links to the other two.  James King has also had a go at explaining it: 'the dominant force is the rising sun. ... the sea can invade and bring destruction to any human life; the presence of the sun here, nevertheless, suggests that such forces can be conquered. ... there is a realm of existence beyond the forest depicted in the interpenetration of room and sky; the emphasis on the aerial in the top image points to a realm 'beyond' - the forces of undoing can be conquered' (1987, quoted in this exhibition catalogue). 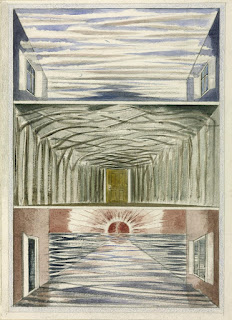 Is there a wider subgenre of landscapes merging with interior space?  Surrealists like Max Ernst and René Magritte combined interior and exterior elements in a similar fashion to Nash.  They and Nash were working in the wake of Giorgio de Chirico, whose Wooded Interior (1926) can be likened to the second of Paul Nash's Three Rooms.  You can see Wooded Interior at the Christie's website, where they describe it thus: 'the setting of the room contains detailed architectural moldings and patterned wallpaper; a mysterious, densely wooded landscape, rooted in the floorboards and pushing upward into the ceiling intrudes on one side of the room; yet most amazing of all are the sea waves that roll in from some unseen horizon.'  However, for me the difference is that de Chirico's painting deploys landscape elements in a surreal interior collage whilst Nash's rooms seem to open onto abstract dream landscapes.

It was a short step from collages on canvas to collages in actual rooms and one of the Surrealist exhibitions prefigures later installation art by including what appeared to be part of a landscape.  For the 1938 'Exposition Internationale du Surréalisme' in Paris, Marcel Duchamp ('generator-arbitor' of the exhibition) designed part of the room as a pool with water-lilies and reeds (Wolfgang Paalen was put in charge of 'water and brushwood').  Looking backwards from the Surrealists, there is an engraving mentioned as an influence by de Chirico, a Symbolist precursor to the convergence of room and seascape in Nash: Max Klinger's Accorde, from his Brahmsphantasie (1894), a set of illustrations inspired by the music of Brahms.

The idea that a room could become a landscape has inspired trompe l'œil wall paintings since Roman times (see my recent post on the Garden Room at Prima Porta).  I gather mural painting has come back into vogue recently, although modern building technology has created glass walls with the potential to 'bring the landscape' into a living room.  But looking at Nash's paintings I wasn't really imagining these architectural landscape rooms.  The images that came immediately to mind immediately were from Maurice Sendak's Where the Wild Things Are, where a forest grows in hero Max's bedroom.  The idea that a world might lie behind a room is found in other children's literature - who hasn't fantasised about a snowy wood reachable by entering their wardrobe?  But I'll end here with Ray Bradbury's chilling reversal of the idea in his story 'The Veld', where a high-tech children's nursery is installed with 'crystal walls' showing a three dimensional view of the African landscape, its ceiling 'a deep sky with  hot yellow sun'.  The simulation is enhanced with realistic heat, smells and sounds, and in the distance can be seen a pride of lions...

Postscript: The YouTube clips originally embedded here are no longer available...  However, Nash's paintings are now out of copyright so I have added one of the images to this post.
Posted by Plinius at 8:07 am

I also visited the Dulwich exhibition recently and found it a mixed experience. I was drawn to the pictures which used a sparer palette, often of dark colours. 'The Winter Sea' was magnificent but I was not as moved by 'Totes Meer' as I have been in the past. The photographs were splendid. But my favourite was the very simple, 1911 water colour from the British Museum entitled 'The Wanderer'. It had echoes of Friedrich's 'The Chasseur in the Forest'. Does Nash's man disappearing into the woods face a similar menacing future as Friedrich's soldier?