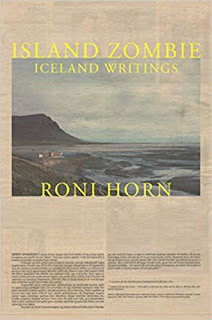 Last year Princeton published this collection of Roni Horn's Iceland writings. The cover image beneath the yellow titles is one of 23 visual editorials she published in 2002 for the weekly culture supplement of Iceland's national daily newspaper (you can see the pinkish paper and newsprint showing through from the next page). It is an interesting choice for a cover as you might expect them to have used one of Roni Horn's photographs, but then this is a collection of her writings. Reading them with few of the familiar images of rocks, pools, icebergs and horizons puts more emphasis on the quality of her words. As a collection of brief reflections they reminded me of other kinds of poetic place writing I've enjoyed, like the Paul Claudel I highlighted here in May.

The section of Island Zombie covering her newspaper contributions includes some poignant longer pieces written twenty years ago, at a point when Iceland still had a choice over whether to preserve its landscape from development. The book also has a speech ('My Oz') and samples from her 'Weather Reports You' project in which Icelanders relay terrifying stories of high winds, treacherous seas and blizzards. But the bulk of the book is given over to writings that formed part of Horn's art practice, spanning her years in Iceland, beginning with the texts already published in To Place IV: Pooling Waters (1990-91) and adding others written during the last thirty years.