The wild pastimes of the cliff 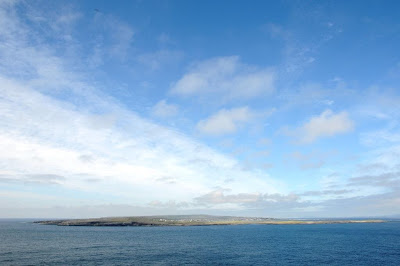 Yesterday we sat on a cliff on the Aran Island of Inis Meáin, looking out over a perfect blue sea.  It was here that J. M. Synge used to come whilst writing his book The Aran Islands - 'as I lie here hour after hour, I seem to enter into the wild pastimes of the cliff, and to become a companion of the cormorants and crows.'  Hardly anyone was around and although quiet contemplation of the Atlantic Ocean stretching away to the west was not easy with two small boys climbing about, I could see why Synge used to go to sit sheltered by the stones on what is now called Cathaoir Synge (Synge's Chair), to be alone with his thoughts.  In his book Stones of Aran: Labyrinth, Tim Robinson mentions the coincidence that both Synge and Lady Gregory first visited the islands in May 1898, when 'Aran was still unfrequented enough to afford the luxury of solitude and the excitements of anthropological pioneering.'  As she wrote later, 'I first saw Synge in the north island of Aran.  I was staying there, gathering folklore, talking to the people, and felt quite angry when I passed another outsider walking here and there, talking also to the people.  I was jealous of not being alone on the island among the fishers and sea-weed gatherers.' 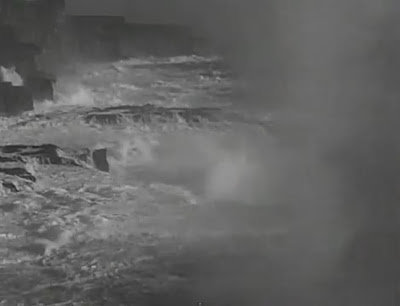 Looking across to the north island, Árainn Mhór (Inishmore), it was hard to reconcile it with my memories of the turbulent black and white seascapes Robert Flaherty shot in Man of Aran.  There are calmer moments in the film, but even they have a sense of life lived on the edge; one I'm glad my sons hadn't seen involves the Man of Aran's young boy sitting with his legs dangling over a high cliff, playing out a line of string baited with crab in order to catch fish.  He abandons all thought of this fishing when he glimpses down in the sea below a basking shark, and the film cuts to the fishermen who are already heading out in a boat, armed with a harpoon.  The ensuing scenes staged by Flaherty were anachronistic, as sharks had not been hunted in this way for fifty years when the film was made.  After toiling to bring in one shark, the men go out again, but the weather changes and the film becomes a total submersion in the aesthetics of the Sublime, with storm waves crashing over dramatically lit cliffs and the tiny figures of the mother and her son looking anxiously out to sea.  Eventually the men make it back, but the boat is smashed to pieces.  There will be more to say here inspired by our short holiday in Ireland, but I will end here with two clips from British Sea Power's 2009 soundtrack to Man of Aran: the first, 'Boy Vertiginous', accompanies the cliff-top fishing scene and the second, 'Man of Aran', works particularly well with the film's opening sequence.

The tide withdraws from around the island


Work took me to Durham yesterday and gave me the opportunity to see the Lindisfarne Gospels exhibition.  I was surprised that the curators made no use of Chris Watson's new collection of field recordings, In St Cuthbert's Time (I anticipated a small installation where you could listen whilst watching a sequence of Maggy Watson's atmospheric photographs).  However, when I went into the cathedral I saw that you could listen to it in the Holy Cross Chapel, which I found through the cloisters in a quiet area away from tourists.  Nobody was around except for an attendant standing on the grass outside.  She warned me that only the front speakers were working, so I am not sure if I experienced the intended effect.  Nevertheless, I sat for a while alone, listening to the birds and the surf breaking on the island shore...

Then, as I emerged with thoughts of Cuthbert and the contemplative life, the peace of the place was suddenly shattered by an exaggerated cockney voice shouting "Roll up! Roll up!" and dissolving into laughter.  It was the celebrity cricketer Phil 'Tuffers' Tufnell doing a piece to camera on the fourth Ashes test that will be played shortly in Durham. Perhaps he was going to go on to make some kind of link between veneration of the 'ashes of English cricket' and the shrine of St Cuthbert, but I didn't stay to find out. 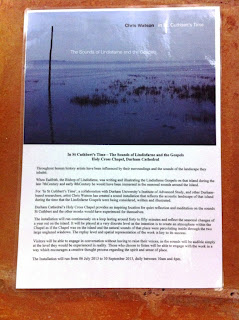 In St Cuthbert's Time is a simple idea beautifully executed.  Each track corresponds to a season and is a self contained natural soundscape, ending with the gentle but insistent ringing of a monks handbell.  Of course it is a work of imagination rather than a historical reconstruction: no attempt is made to include the sounds of the monks going about their religious observances or the craftsmen and labourers who worked on the island.  Watson has said that he incorporated the cuckoo because it is mentioned in a 7th century source but could not include the great auk, whose bones have been excavated on Lindisfarne.  No doubt some will view these recording as an idealisation of a lost time, but I would happily listen to more echoes of the past in sound art and field recordings.  Perhaps there are not many historical figures as attached to the landscape as Cuthbert, who loved the island's birds and animals and gave special protection to the Eider duck.  History is a sequence of noisy events but I can imagine listening, say, to a summer's morning in the New Forest, just before the arrival of William Rufus and his hunting party, or the sounds of Glencoe after the massacre, wind sighing off the mountains and snow dripping from the trees.

Listen to the clips I've embedded here but buy the CD too: its booklet, among other things, includes descriptions of the four tracks that read like short landscape poems.  Here is 'Winter':

The tide withdraws from around the island to a distant horizon marked by a line of breaking
Anser anser - Branta bernicia - Cygnus cygnus
waves and the deep tones of surf rolling into far distant sands.  Greylag geese fly over a
gathering of ducks and wading birds in the tidal margins of the freshly revealed causeway.
Anas penelope - Numenius arquata - Pluvialis squatarola
Brent geese and whooper swans pass between a flock of wigeon which are alarmed by a fox
stalking through the mud.  Slowly, as a the tide turns to flow, ravens assemble by their roost site
Vulpes vulpes - Corvus corax
over on the mainland.

Five minutes on even the nicest mountain is awfully long


Winds, Woods, Mountains, Lakes, Islands, Plains and Streams: each are addressed in turn in W. H. Auden's 'Bucolics' (1953).  Glyn Maxwell, writing in 1994 (the year he was a New Generation Poet) thought them 'the supreme poems of a broad and balanced education in this century'. He appreciated the way Auden managed to generalise without abstracting and simplifying.  In 'Mountains', for example, which you can hear Auden read in the embedded clip above, he asks whether he must accept that the Lake District is merely a bourgeois invention like the piano.  But the reality of the landscape cannot be reduced to this.  'I wish I stood now on a platform at Penrith', he thinks - waiting for a local train and anticipating the moment when 'you smell peat or pinewood, you hear / your first waterfalls.'  'Mountains', as Maxwell says, touches on crime, farming and archaeology, as well as the relationship between geography and psychology, but concludes with something personal and idiosyncratic: 'For an uncatlike / creature who has gone wrong, / five minutes on even the nicest mountain / is awfully long.'

The second clip below is 'Woods', which begins in Piero di Cosimo's primal forest, where none of the creatures 'thought the lightning-kindled bush to tame / but, flabbergasted, fled the useful flame.'  That was before civilisation had taught them 'to abhor the license of the grove.'  Nowadays it can be said that 'the trees encountered on a country stroll / reveal a lot about that country's soul.'  The poem ends with what seems like a premonition of the disease that has lately infected our woods: 'a small grove massacred to the last ash...'  And so neither woods or mountains are places Auden feels fully comfortable in; indeed none of the landscapes in the central five poems 'really get his vote', as Maxwell puts it.  'Plains' fill him with horror, 'Islands' seem a place of joyless exile and 'Lakes' are for other people ('It is unlikely I shall ever keep a swan / or build a tower on any small tombolo').  It is only in the final section, 'Streams', that Auden seems to find peace and contentment.  'It is fitting.' Maxwell concludes, 'that he ends up by water, 'the aboriginal pilgrim, / at home in all sections', timeless and free yet chained like us to the actualities of gravity and stone.'