The Succession of Strata

I was recently given the splendid Thames & Hudson volume STRATA: William Smith's Geological Maps, which has contributions from a range of experts and a short foreword by Robert Macfarlane. The book is a thing of beauty as you can see from the gallery on the T&H website. In addition to Smith's maps, it includes photographs of the fossil collection he amassed, which was fundamental to his understanding of geology and which he arranged on sloping shelves to represent different geological strata. When Smith got into financial trouble he was forced to sell these fossils to the British Museum but twenty years later they remained unopened in their boxes (reminding me of a similar story of indifference from a century later, when Apsley Cherry-Garrard donated to the museum an emperor penguin egg collected in the Antarctic after 'the worst journey in the world'). There is an interesting story of social class running through the book, with Smith having to earn his living from practical work in mining and land improvement and only fully appreciated by the intellectual elite at the end of his life.

From a landscape perspective the most interesting drawings are the panoramic sections that show how strata lie underground and where they emerge on the surface. The example above is on a separate bookmark / legend which comes with the book; its reverse shows the sequence of strata and their colours, ranging from London Clay to Granite, Sicnite and Gneiss. The example below (published in July 1819) shows part of Britain I am familiar with, the chalk downs near Brighton. The text underneath the image here is very practical - 'Much Chalk goes from these Hills by the Ouse Navigation to the interior of Sussex and is there used on the Land either in a crude state or burned to Lime by Wood fires for that purpose. The Sussex Clunch or Gray Chalk like that of the Surry Hills makes an excellent Lime for building in Water.' Colourists were employed for his maps but Smith himself was an enthusiastic draughtsman and STRATA includes a selection of portrait drawings of acquaintances from his sketchbooks. To quote Robert Macfarlane, Smith's great map ' now exists somewhere between artwork, dreamwork and data-set.' 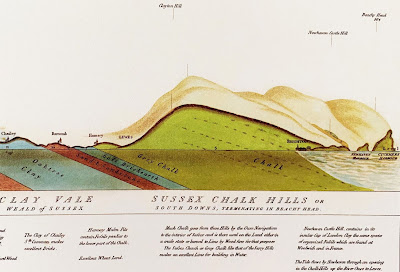 Posted by Plinius at 6:27 pm No comments: