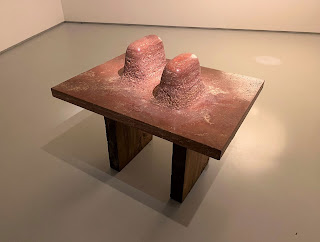 I instinctively liked this sculpted landscape in the Barbican's Isamu Noguchi exhibition because of its beautiful colour and the texture of the marble. I tried to imagine owning such an object, but as usual found it impossible to conceive of an artwork surviving long in our messy house before being submerged under junk mail, coffee mugs and discarded clothes. Noguchi is certainly easy to criticise and Jonathan Jones was scathing in his review: 'what struck me most is how nice these objects would look in a smart luxury house or apartment. Noguchi makes you see the history of modern art in a new, and disappointing, way.' Double Red Mountain is normally safely housed in The Isamu Noguchi Foundation and Garden Museum, New York. By the time Noguchi made it he was a globe-spanning art star and this sculpture combines Persian travertine, Japanese pine, and Noguchi's memories of the mesas of Arizona. 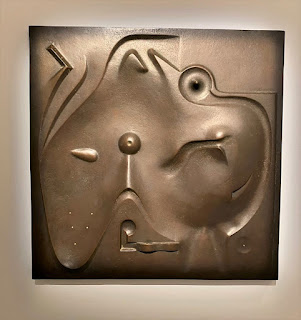 This wall-mounted bronze sculpture depicts one of his ideas for an actual landscape design - a playground in Central Park. It was never built, partly because the country was soon at war. Noguchi's residence in New York meant he was exempt from forced imprisonment but he voluntarily chose to enter one of the internment camps in Arizona. Here, at Poston War Relocation Center, he tried to develop an arts and recreation programme to improve the lives of the Japanese-American prisoners. His plan for the site, featuring a Japanese garden and a tree-line irrigation stream, is on display in the exhibition (see below). However, there was no real desire from the authorities to make conditions pleasant or build anything too permanent and so his ideas were frustrated. The temperature extremes and dust storms were hard to endure ("O! for the sea!" he wrote to Man Ray) and he decided to leave. He had to wait three months for his request to be granted and he returned to New York in 1943. 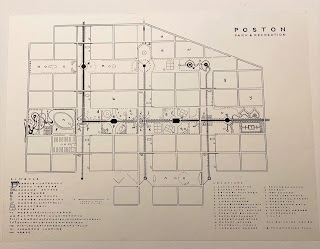 Posted by Plinius at 9:29 am No comments: