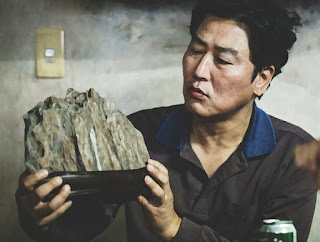 Killed by a landscape! This nearly happens in Bong Joon-ho's multiple prize-winning film Parasite. Chekhov famously said that "one must never place a loaded rifle on the stage if it isn't going to go off," so I did wonder what the significance would be of the scholar's rock in the shape of a mountain range that gets given to the character Ki-Woo near the start of the film. The climactic scene is referred to in an interesting Hollywood Reporter article (spoiler alert).  Torrential rain floods the home of Ki-woo (played by Choi Woo-shik) and his family...

As they wade through murky water, each searching for their most important belongings, the camera cuts to Ki-woo's perspective, looking down. There, the rock — seeming to defy the laws of nature — rises from the depths into his waiting hands. "In the script, the rock didn't originally float," Choi recalls. "But when we were shooting, director Bong was like, 'You know, I think it would be better if the stone floats up through the water.' I remember thinking, 'Whoa. What?' "

In the scene that follows, as the family lies on the floor of a crowded rescue shelter, Ki-woo tells his dad, Ki-taek, played by Bong's regular collaborator Song Kang-ho, that he feels as if the rock is following him. "Essentially, I think it represents this desire in the heart of Ki-woo not to give up on the idea that he can become the kind of guy who can find a way to give his family a better life," Song explains. But in the end, the rock that Ki-woo willed to be a metaphor is symbolic only in the manner of Sisyphus, or plainly literal as in "hard as a rock."

"All it ends up doing for Ki-woo is bashing his skull in," Song says.

Eve Willis wrote a piece about the Parasite landscape rock in The Guardian back in February. She made a connection with Uncut Gems, another excellent film in which rocks represent the aspiration to get ahead in an unfair society. When wealth is intangible and elusive, floating in an unreal world of bitcoins and mad property values, 'faith in the promise of stones and jewels makes abrupt sense.'  In Parasite,

'When Ki-woo is presented with the rock, he coos: “It’s so metaphorical.” In the final scenes, we see the origins of the viewing stone, as a pair of hands pluck the rock from a pristine stream. We hear Ki-woo’s message to his estranged, imprisoned father: he is making “a long-term plan … I’m going to make a lot of money.” The viewer watches, knowing this rock was used to split Ki-woo’s head open.'

I will conclude by quoting one more article (on Artnet), where New York art historian Kyunghee Pyun provided some context for the landscape rock (suseok) in Parasite. 'The golden age of suseok collecting was during the Joseun dynasty (1392–1897), but they regained popularity in the 1980s among a class of businessmen (like Parasite’s newly wealthy Mr. Park).'

"Those in the know “don’t collect loose, granuled rock, or get a rock that might break.” Surfaces with a bit of a pattern or a wave, like the striated suseok in Parasite, are also more desirable, Pyun notes. “Round, three-dimensional is better than sort of a thin slab of stone,” she adds. “Almost like a porcelain type of quality, it should be seen from all directions.”

Prized suseok are found in nature. Ideally, they’re never altered by human hands. “In China or Japan, in order to accentuate the dramatic effect, they put varnish types of materials or trim a little bit,” Pyun notes. “But for Korean rock collectors, the essence is you never touch it. As is, the nature is the beauty of the rock.”'

Posted by Plinius at 8:40 am No comments: 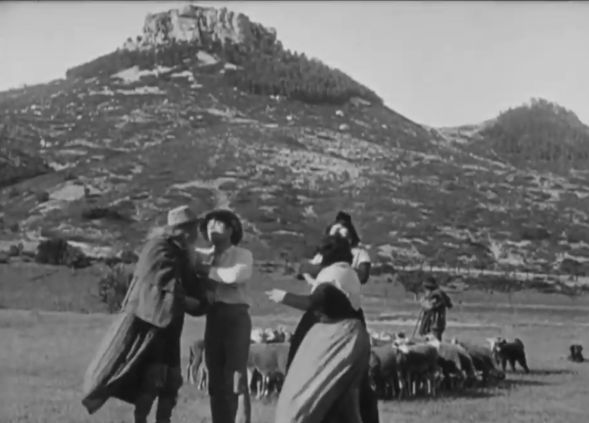 In 1908 Pathé created their own version of Le Film d’Art, the new initiative to make more highbrow films whose first production, starring actors from the Comédie-Française, was The Assassination of the Duke of Guise. The Pathé version was the Société Cinématographique des Auteurs et Gens de Lettres and its first film was L'Arlésienne. The film is remarkable not for its acting (lots of arm waving) but for its technical sophistication (use of double exposure to illustrate the hero Frédéric’s hallunications) and use of real locations, most notably the amphitheatre at Arles. At 3 minutes 15 there is a remarkable 180 degree pan across the Provençal landscape. There are also a few other scenes which give a real sense of place, like the image above of a Frédéric deciding to marry his childhood sweetheart rather than the woman of Arles he met at the amphitheatre.

Of course one of the pleasures of seeing glimpses of Arles in 1908 is knowing that it was exactly twenty years earlier that Van Gogh and Gauguin we re painting there. The Gauguin picture below could almost be a view of the farmhouse where Frédéric lives. L'Arlésienne was based on one of the stories in Alphonse Daudet's Letters from My Windmill (1872).  I've never got round to reading this so I will quote from a Guardian piece on the book:

'There are impressive tragedies at a scant 1,500 words, like the backstories to single paragraphs in an old newspaper: the inn depressed to ruin by deaths in the family, the farm boy obsessed by a flirt from Arles farandoling in her velvet and lace. Daudet based a melodrama on her with music by Bizet, but the stage version expands to lassitude. His sense of place was strongest when pent up in his fragments.'

This music by Bizet can be heard as the soundtrack to the film. And there is one more cultural link (which I read about on the Cinema History blog): the plot of L'Arlésienne is based on a real story which was told to Daudet by Frédéric Mistral, the great poet of Provence, whose statue now stands in Arles. A nephew of Mistral's, disappointed in live, committed suicide by throwing himself out of the window of the family house.

Paul Gauguin, Landscape near Arles, 1888
Posted by Plinius at 4:16 pm No comments: