The Dulwich Picture Gallery's Edward Bawden exhibition has a room devoted to 'Spirit of Place'.  It includes 'Houses at Ironbridge' (1956/7 owned by the Tate) which is a good example of the way Bawden experimented in his watercolours - the detailed, colourful brickwork might come from the illustration to a children's book but the cloud above is roughly scrawled like something in a contemporary abstract painting.  The same year he was elected as a Royal Academician and submitted as his 'Diploma Work' a watercolour of Lindsell Church.  This church, near Bawden's home, was also the subject of perhaps the most impressive work in the 'Spirit of Place' room, a large lithograph from 1963.  Bawden was generally happy to concentrate on depicting his small corner of Essex, but the exhibition also includes the work he did as a war artist in Italy, North Africa and the Middle East, and a rather striking view of The Canmore Mountain Range (1950), also in the Tate, which was painted on a teaching trip to Canada.  In this, the foreground is filled with the gravestones and spiked railings of a Ukrainian cemetery which crowd together and point up to the jagged facets of the mountains, all under a dark grey sky. 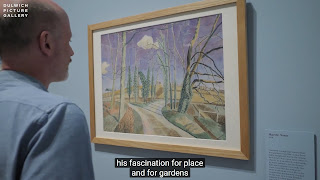 From the pre-war years the exhibition has some watercolours of Newhaven Harbour, very like those of Bawden's friend Eric Ravilious.  They have the same Downland colour palette and the same fascination with mark making - stippling, scratching and washing the paint in various directions.  Curiously, the landscape itself seems to tilt down to the right, as if a straight horizon would have made the view look too boring.  There is a playfulness and energy in everything Bawden did, even if the results were sometimes rather twee or nostalgic.  The gallery obviously thinks the exhibition will appeal to children and (irritatingly) the main painting captions seem to have been written with them in mind.  It is, as the review in The Independent points out, easy to compare this exhibition unfavourably to the excellent Ravilious show at Dulwich which I wrote about here three years ago.  However, perhaps you can judge for yourself if I end here with an embedded clip of curator James Russell walking through his show.  I've also included a screen grab from this above, by way of illustration, as Bawden's actual images are still in copyright.

Email ThisBlogThis!Share to TwitterShare to FacebookShare to Pinterest
Location: Canmore