The vault of light as the sun goes down

Philip Terry is an academic at Exeter specialising in the Oulipo and experimental writing - he recently edited The Penguin Book of Oulipo and described the experience in an article for The Irish Times. Carcanet have recently published his new book The Lascaux Notebooks, which they describe as 'the oldest poetry yet discovered, as written down or runed in the Ice Age in Lascaux and other caves in the Dordogne, and now translated – tentatively – into English for the first time.'

In his introduction, Terry claims to have come across the name of a local poet, Jean-Luc Champerret, while on holiday in the Charente. He was given a box of the poet's papers, which took some opening but were found to contain a set of notebooks. In these he found what appeared to be modernist poetry derived from 'diagrams reminiscent of Chinese calligraphy.' Champerret, Terry learned, had been sent into the Lascaux caves soon after their discovery in 1940 by his Resistance cell, in the hope that they might prove a good hideout. Getting there before the archaeologists, he noticed that some of the marks on the walls resembled a kind of code. Speculating that they were a form of Ice Age poetry, he noted them down and then over time managed to produce translations them by imagining the signs' likely meaning. Initial versions were simple grids of words but, like a translator from ancient Chinese, he added some connectors and imaginative interpretation to render them as French poems. 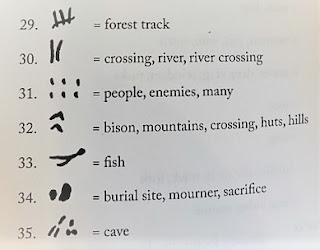 If Ice Age people had poetry, there would probably have been frequent mention of their landscape in it. The extract above from the list of Lascaux signs used in these poems includes markings interpreted as meaning forest tracks, rivers, mountains and caves. They are of course reminiscent of Chinese ideograms, which were so important for Ezra Pound and which I've discussed here before as natural signs - see 'Climbing Omei Mountain' and 'Water falling, drop by drop'. They also reminded me of the poetry many of us find in studying the legends of Ordnance Survey maps!

I'll give one example here of a Lascaux poem, but Terry's books is pretty long - 400 pages - so I can't really do his whole project justice. The 3 x 3 grid poem I've reproduced at the start of this post is rendered as follows:

Posted by Plinius at 5:28 pm No comments:

Here's what you see when you enter the Royal Academy's new exhibition, a view of a bay with oddly sketchy waves, scattered black buildings and stick trees like Chinese characters. In Jonathan Jones' Guardian review he says

'Avery is sometimes hyped as an American Matisse but he is much stranger, and better, than that. Far from simply emulating Matisse, he translates the pleasures of beach life and summer days the French fauve painted into the brooding land and seascapes of America with wild results. Little Fox River, from 1942, seems joyous and summery at first sight, with its butter-yellow landscape surrounded by blue waves, but then you notice how big and inhuman the waves are, how tiny the swell of the sea makes the frail houses and church look.' 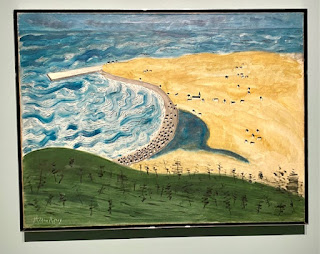 The first room of the exhibition begins with some of Avery's early, unremarkable Impressionist-style landscapes and a range of later ones which can seem wilfully ugly in their choice of thin paint, dull colours and awkwardly drawn animals and buildings. But he could also hit on a combination of forms that seems wonderfully original and appealing, like Blue Trees (below - available to buy as a jigsaw in the RA shop!) My favourite works in the exhibition weren't the landscapes or his snapshots of city life, but domestic scenes which he painted in increasingly simplified forms, like Reclining Blonde (1959). Here's Laura Cumming describing his technique in another five-star review:

'Avery thinned his oil paint to the diaphanous consistency of watercolour so that it lay on the surface in floating patches and veils. Sometimes he scribbled upon it – the outline of a pencil or a pipe, a fleet of horizontal nicks that somehow manifest as leaves on a rust-coloured autumn tree. Sometimes the brushstrokes of one colour merge into those of another to produce a soft frisson, as in the snow-white nude against a black background, where the overlap glimmers.' 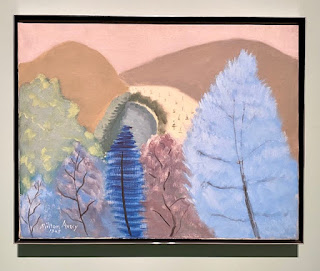 I first came across Avery years ago when I was reading a lot about his friend Mark Rothko, but I've never seen an exhibition devoted to his work - unsurprising as there hasn't been one in Europe. This one was a real pleasure and, despite the glowing reviews, not too busy with other visitors. It ends with paintings from 1957 inspired by Cape Cod, where, as the curators explain, 'Avery spent four consecutive summers, often in the company of Rothko and Gottlieb. These later works, with their larger scale and more abstracted forms, reveal the influence of the younger painters. Intensifying what he had striven towards over the previous five decades, Avery omitted detail, distorted forms and used non-associative colours.' These non-associative colours are evident in the painting I photographed below, Sea and Sand Dunes, a truly weird landscape in shades of red, white and mauve. A painting like this actually looks more contemporary than the abstract expressionists, reminding me of Alex Katz or Peter Doig. Jonathan Jones concludes that after visiting this exhibition 'you’ll never be able to see a Rothko again without picturing a seashore at dusk where the red blazing sky is layered above the wine dark sea, in an apocalyptic revelation.' 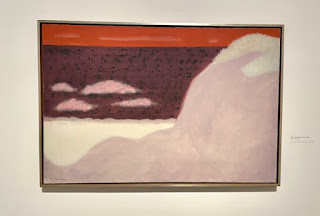