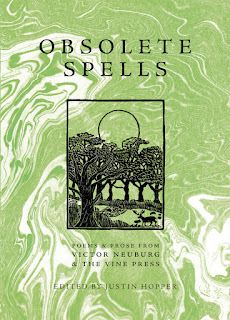 It was good to be able to visit London's Small Publishers Fair again last month, where I have found various unusual landscape-related books in the past (five years ago, for example, it was some Scots translations of classical Chinese poems). If this event had been going in the 1920s it might have had a stall for The Vine Press of Steyning, run by the poet and former acolyte of Aleister Crowley, Victor Neuburg. Justin Hopper has recently put together an anthology, Obsolete Spells, providing samples from these books and a short biography of Neuburg (whose other claim to fame was 'discovering' Dylan Thomas). The phrase 'obsolete spells' occurs in one of Neuburg's own poems, 'Downwood' which you can read in full at the 100th Monkey site, 'a resource dedicated to providing an accurate and complete bibliography of the literary output of Aleister Crowley and selected other writers.' Justin sees this poem as 'a chilling precursor to folk horror', evoking the Downs' pagan past. Here is Neuburg's brief preface to it.

An Autumn Vesperal, the grey hues merging into Night and the distant sound of the Sea.

The Hills become blurred, a light Rain falls, and before the final Darkness there is a Vision of light low-browed men scudding amongst the gorse. Mingles with the dream of forgotten Races, there is a motif of Reminiscence and a Fireside.

I wrote here previously about Chanctonbury Rings, a musical collaboration with Sharron Kraus based on Justin's last book Old Weird Albion. They have teamed up again for Swift Wings, an album which was reviewed on Caught by the River by Gareth Thompson:

Within a folk-gothic setting of rippling flutes and sci-fi synths, Neuburg’s words turn a startling corner. Kraus gives each lyric a spooky undercurrent, where dark and buried passions come to life as pagan sonnets. Sunny ballads and mysterious odes are offset by ghostly giggles. Hopper narrates the words in his best fruity tones, Kraus murmurs in tandem, as we drift into a realm of laudanum-laced harmonics.

Sharron says she had initial misgivings about Neuburg's ornate poetry, which is not that easy to like, and is perhaps best experienced via her musical settings. Interestingly, the first Vine Press book, Lillygay, a selection of verse taken in part from old ballad books, was read by the composer Peter Warlock who set some of its lyrics to music.

Neuburg published landscape poetry by a few other writers through The Vine Press. The one I am familiar with from anthologies of Sussex writing is G. D. Martineau - his second volume The Way of the South Wind was put out by Neuburg in 1925. Martineau went on to become much better known as a cricket writer and his second Vine Press anthology includes some cricketing verse. Justin includes a small selection of Martineau's poems, including one describing the simple pleasure of lying alone at night on Fairlight Hill and another which describes 'black and harsh' Newhaven - 'here you stretch like a loathly sore, / clamorous over the ruined shore.'

The Latin text on the page below from the volume Swift Wings suggests that the work of the muses is equal in glory. For me, the woodcuts used in the books seem at least as interesting as the poems. They were the work of three Steyning brothers, the Wests, whose printing works is still going strong. 'In their simplicity,' Justin writes, these rough illustrations 'gain an eeriness that's difficult to either pinpoint or dispel. The distance of a century helps: today, early books from The Vine Press give off a sensual leer and a slight air of threat that belies their jolly, bawdy origins, yet - I think - brings the reader to exactly the spot that Neuburg intended.' 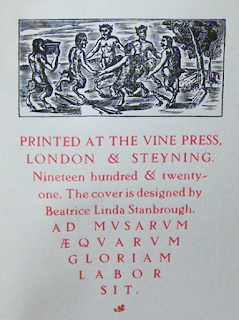