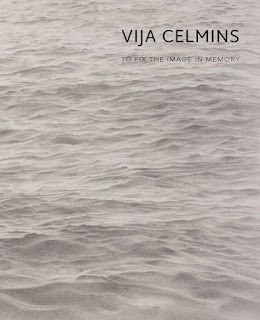 The oceans and deserts of Vija Celmins are monochrome patterns of pencil marks and brush strokes - no landmarks, just abstract surfaces. She may have looked at particular sites but the artworks only reproduce her photographs, or photographs taken by others - landscape at two removes. Their sources are hidden in titles like Untitled (Desert) and Untitled (Ocean). Nevertheless, the patience and attention needed to make her art seems to ask questions about how closely we attend to the world and really spend time in a particular environment. Observational drawing has a long history - Briony Fer cites the examples of Dürer's Large Piece of Turf and Ruskin's advice in The Elements of Drawing in her essay in Vija Celmins: To Fix the Image in Memory (ed. Gary Garrels). But art of this kind is closer to still life than landscape. Celmins' drawings of the sea are each 'a graphic rendering of a ready-made image and not a record of the vastness of the ocean.' 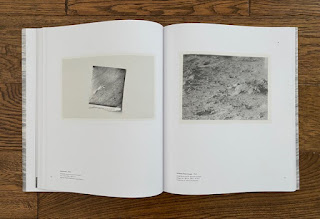 A page from Vija Celmins: To Fix the Image in Memory showing moon drawings from 1968-9

One sentence from another essay in this book by Russell Ferguson particularly struck me. In discussing Celmins' early paintings he suggests that 'T.V. (1964) shows an everyday object from the studio - a television set - but a very contemporary one: this is probably one of the earliest representations of a TV in painting.' If this is true it is remarkable to think that art can have ignored such an important object in people's lives for twenty years. One could also say that in the late sixties Celmins was one of the first artists to depict the landscape of the moon, although her drawings of NASA photographs are clearly at second hand, deliberately reproducing the blurring and imperfections in the source images. In this way they are quite different from the pastel drawing John Russell made nearly two centuries earlier using a telescope, which despite the vast distance was based on direct observation. 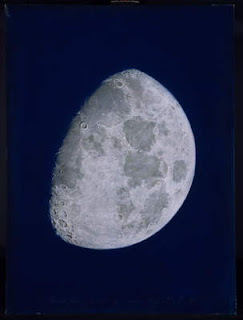