In the twilight there is a field

I've been reading The Collected Haiku of Yosa Buson, translated by W. S. Merwin and Takako Lento. The collection was put together just after Buson's death in 1784. Such brief verse can evoke a landscape through metonymy but rarely makes you think immediately of landscape views like the Buson painting above, the Met's Travels Through Mountains and Fields. I did notice a general exception to this rule though and it occurs when fiels are the subject of the poem - you can't really talk about a field without evoking a landscape. There are 868 haiku in the volume so I think it is probably OK under fair use to reproduce just four here, one for each season. For spring it is a toss-up between numbers 58, 140 and 183 but I'll go for the first, which actually has a 'landscape' title, 'Looking across the Field'.

Mist in the grass

Evening sun slipping behind the hills

a waterwheel is turning

in the field of ripening wheat

The mountains darken after the sun goes down

in the twilight there is a field

out in the desolation

the sun slips into the rock

Clearly these are all variations on a theme: the field and the sunset are constants, but the atmosphere is different in each poem.

Finally, a message I have to pass on from Blogger. 'Recently, the FeedBurner team released a system update announcement , that the email subscription service will be discontinued in July 2021.
After July 2021, your feed will still continue to work, but the automated emails to your subscribers will no longer be supported.' Sorry about this...

Posted by Plinius at 5:48 pm No comments:

A Landscape Painter in Albania 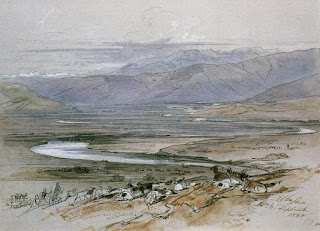 Edward Lear, The valley of the Shkumbin River
near Elbasan in central Albania, 26 September 1848

Edward Lear's travel writing is, as you would expect, written with a sharp wit and punctuated with discriptions of landscape. The fact that he was travelling and then writing as a landscape painter gives his books a double interest for me. Journals of a Landscape Painter in Albania for example begins with a description of his equipment - only the essentials needed to travel light, in what was then still a region barely visited by English travellers. He complains a lot about his accommodation but explains that he had no choice but to stay in roadside khans - if he had tried to stay instead with the local pashas he would need to have fitted in with ceremonies and meals that would have left no time for sketching. Lear was there in the autumn of 1848 and mentions finding a German newspaper to read and being amazed at the news of revolutions across Europe. His route through what is now Albania was partly forced on him by widespread quarantine and travel restrictions (cholera, rather than Covid-19, in those days). It began in the east, after he had travelled overland from Thessalonika via Bitola and Ohrid. He then headed towards Tirana and just before reaching it wrote this description of the mountain landscape.

'How glorious, in spite of the dimming scirocco haze, was the view from the summit, as my eyes wandered over the perspective of winding valley and stream to the farthest edge of the horizon — a scene realizing the fondest fancies of artist imagination! The wide branching oak, firmly rivetted in crevices, all tangled over with fern and creepers, hung half-way down the precipices of the giant crag, while silver-white goats (which chime so picturesquely in with such landscapes as this) stood motionless as statues on the highest pinnacle, sharply defined against the clear blue sky. [...]

It was difficult to turn away from this magnificent mountain view — from these chosen nooks and corners of a beautiful world — from sights of which no painter-soul can ever weary: even now, that fold beyond fold of wood, swelling far as the eye can reach — that vale ever parted by its serpentine river — that calm blue plain, with Tomohr in the midst, like an azure island in a boundless sea, haunt my mind's eye, and vary the present with visions of the past. With regret I turned northwards to descend to the new district of Tyrana; the town (and it is now past eleven) being still some hours distant. 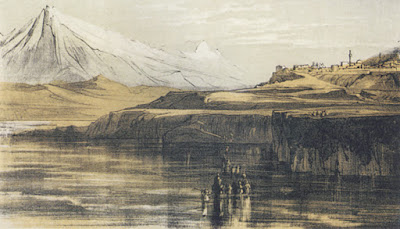 Unfortunately, as this suggests, Lear's descriptions of scenery are not all that interesting, even if they do make you want to visit Albania. You wouldn't expect anything like his nonsense verse but you might hope for a more original mode of landscape description. In an NYRB review (from which the image above is taken) of a reprint of the journal, Brad Leithauser says

'The book imparts almost no sense of Lear’s reading, the literary spirits he might have been seeking to commune or contend with during his travels. Most of the few literary references are to Byron, only because he happened to precede Lear to Albania by a couple of decades. Sentence by sentence, the book gives scant indication of a poet’s sensibility, for Lear was a slapdash prose stylist. Edward Lear in Albania often seeks to portray panoramic landscapes through words, a challenge that typically elicited from Lear sweeping and obvious adjectives: “noble,” “majestic,” “sublime.” He was especially fond of “picturesque,” which at one point appears three times in a single paragraph.'

Despite this defect, it is fascinating to read about Lear's experiences of a country that had so recently been under the rule of Ali Pasha. I'll end here with his decription of visiting Tepelenë:

'At the end of the space enclosed by the walls, and overhanging the river, is a single mosque — solitary witness of the grandeur of days past ; — and beyond that, all the space, as far as the battlement terrace looking north and west is occupied by the mass of ruin which represents Ali's ruined palace. The sun was sinking as I sat down to draw in what had been a great chamber, below one of the many crumbling walls — perhaps in the very spot where the dreaded Ali gave audience to his Frank guests in 1809 — when Childe Harold was but twenty- four years old, and the Vizir in the zenith of his power. The poet is no more ; — the host is beheaded, and his family nearly extinct ; — the palace is burned, and levelled with the ground ; — war, and change, and time have, perhaps, left but one or two living beings who, forty years back, were assembled in these gay and sumptuous halls.'*

*I'm not sure what Tepelenë is like today. In 2013, Tim Neville, on the trail of Byron, described it in a travel piece for the Financial Times: 'I drove to Tepelena, where the remains of Ali Pasha’s palace stood derelict and littered with rubbish. A plaque celebrating the poet’s visit hung from the side of a wall next to a petrol station...'

Posted by Plinius at 7:18 pm No comments: