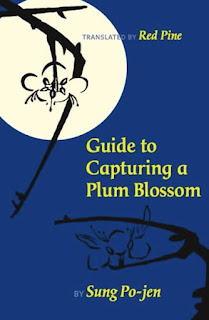 The Guide to Capturing a Plum Blossom by Sung Po-jen is the world’s earliest-known printed art book, published in 1238.  Only one copy seems to have survived the Mongol invasion of 1276 and this eventually came to be owned by the 16th century artist Wen Cheng-ming (Wen Zhengming), who I have mentioned here before in connection with his painting Garden of the Inept Administrator.  This copy disappeared from view until it was found in 1801 in a Peking antique market by a connoisseur who recognised its importance and had it reprinted.  There is an English translation by Red Pine, published in a lovely edition by the Copper Canyon Press.  Sung Po-jen's book takes the form of one hundred ink drawings, showing a plum blossom in all its stages from budding to opening, flowering, fading and forming fruit.  Each is accompanied by a short poem on a subject suggested by the shape of the blossom.  Thus there are poems on bowls and drinking vessels, hats, birds, insects, fruit, shells, an ancient coin, an arrow head, a zither pick, a hanging bell, a fan and a jade dipper. 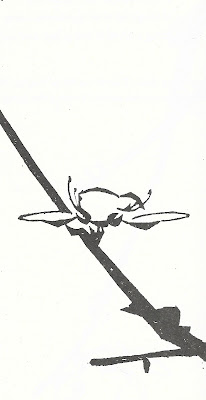 Some of the poem titles evoke actual landscapes and moments of time, suggested by nothing more than the simple form of a single branch and flower.  'Lone Goose Calling to the Moon', 'New Lily Pads in Pouring Rain', 'Crow Landing on a Tree in Winter...'  Poem 78 in the sequence is called 'Clouds Sweeping Distant Mountains'.  Looking at the accompanying image (left), I can start to see it.  Through this visual metaphor Sung's plum blossom becomes a kind of landscape drawing.

The four lines of 'Clouds Sweeping Distant Mountains' each recall other the words of other poets. The first pictures clouds 'aimlessly rolling out of mountain caves' and refers to something T'ao Yuan-ming wrote (I mentioned T'ao last month in my post about We Ying-wu). The second, 'one wave and the slopes are gone' quotes a contemporary poet, Huang Keng, whose 'Evening Stroll in the West Garden in Spring', describes the disappearance of a mountain at sunset.  The third refers to to a Tu Fu poem on the changeability of the sky: 'a turn of the hand and the clouds appear / another turn and they become rain'.  And the last line, which mentions the 'demon of drought', is derived from 'River of Clouds', a poem in the earliest collection Chinese poetry, the Book of Songs.