An artificial island on the Arno 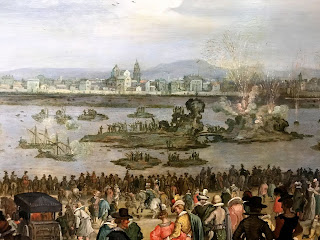 Netherlandish Master, after Jacques Callot,
The Mock Battle Between the Weavers' and Dyers' Guilds
on the Arno in Florence on 25 July 1619 (detail), c. 1620

In seventeenth century Florence there was an annual festival in which the Weavers' and Dyers' Guilds fought for possession of an artificial hill, built in the middle of the river.  This painting of the event, in Frankfurt's Städel Museum, was based on an etching by the French artist Jacques Callot (1592-1635).  Several museums have copies of Callot's print, which was made in the form of a fan.  The Grand Duke, Cosimo II, had these fans made before the event and distributed to the spectators.  It would be good if one of the people shown in the foreground of this picture could be seen holding one of those fans, but I can't see one. Callot may have included one though in his original design, as a Courtauld blog post about the print explains. 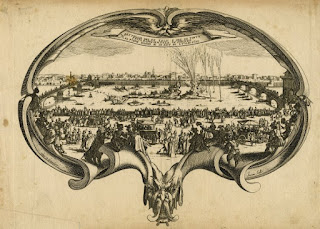 From a landscape perspective I would love to know more about this artificial island.  Who designed it?  How was it made?  It looks pretty big.  How was it anchored so that it didn't drift away or collapse under the weight of the battling weavers and dyers? An earlier artificial island on the Arno, complete with a temple, had been constructed as part of the extravagant wedding celebrations for Cosimo and Maria Magdalena on the 18 October 1608.  It was the stage for a re-enactment of Jason and the Golden Fleece and you can see it in the print below by Matthaeus Greuter (1564–1638).  But this doesn't look as impressive as the one built in 1619, which resembles a real landscape.  Did this hill only look real from a distance?  Were actual trees used?  I imagine a group of picnickers rowing out to enjoy this temporary idyll on the night before the battle. 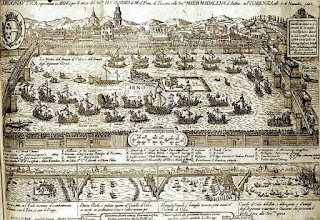 Has anyone done a study of such islands?  They seem to have featured prominently in various European festivals and royal pageants.  In 1638, for example, another Medici, the Queen of France, was led in procession to an artificial island in the Amstel River for a display of dramatic tableaux. In England, Queen Elizabeth was entertained at Kenilworth Castle in 1575 with a famous display that included a floating island with the Lady of the Lake attended by nymphs (these festivities may have inspired Shakespeare’s A Midsummer Night’s Dream). There is an interesting description on the Brown University site, of one of these islands, made for the marriage of Louise-Elizabeth of France and Philip, prince and grand admiral of Spain, in August 1739.  It was not designed to resemble a natural island; this was pure stagecraft - it even contained a salon for an eighty-piece orchestra.


'The structure was suspended on two large boats which were concealed beneath the artificial rock outcroppings along the island’s perimeter. ... The citizens of Paris would instantly recognize that the island was not part of the natural landscape, but an illusionary construct on the river’s surface. However, rather than detracting from its ability to awe, in fact it added to the island’s captivating quality. The entirety of the structure was created for the conspicuous consumption of the spectators.'