A terrace of incense lit by the dawn 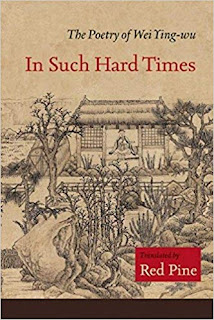 I have been reading the Tang Dynasty poet Wei Yingwu (737-92) in Red Pine's award-winning translation, In Such Hard Times (2009).  Anyone who has read Chinese poetry will know of the An Lushan rebellion and its impact on the lives of China's greatest writers.  Wei himself had been a young palace guard when the insurrection took place and his life as an official played out in the 'hard times' that followed. He was born "within a horseback commute of Ch'ang an", the biggest city in the world, but the first poems in the book were written in 763 in Loyang, the eastern capital that had just been recaptured from the rebels. Like other Chinese poets, he was torn between official duty and the desire for scholarly retreat, with the example of  Tao Yuanming constantly in his mind.  There's a lovely poem called 'East of Town' that concludes with Wei wishing he could retire and build a hut like Old Tao. It begins: 'Stuck in an office all year / I left the city for the wide-open dawn / where willow catkins soothed the wind / and blue mountains stilled my cares...'

A few years ago I mentioned Red Pine's Han Shan book in which the translator talks about the mountains that inspired the poems.  In this book, his footnotes explain exactly where each was written, so I thought here I would give a sense of Chinese landscape through Wei's eyes by quoting lines he wrote at different locations over the course of two decades.  Of course these brief images are not unique to these places - similar scenes could have been experienced all over the country, or even further afield: the same moonlight admired by Wei and his friends also fell on Charlemagne's Europe...  Perhaps because I have never been to China, or been taught about it, I sometimes struggle a bit with its geography, so here, just for fun and to give sense of Wei's travels, I've superimposed a map of eastern China, in blue, on Europe (using thetruesize.com). I have positioned it so that the Tang Dynasty capital Ch'ang-an is where you see Paris and Loyang is roughly on top of Stuttgart. 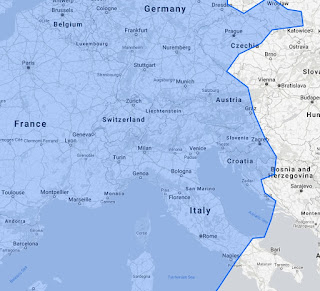 '... from the summit I heard a chorus of winds
in the woods I bathed in a secluded stream
the sound of a bell roused me on the Way
the evening chime cleared the clouds and mist...'

The Sungshan mountains lie just to the southeast of Loyang. Here Wei writes of stopping on a pine ridge and hearing the bell from the Shaolin Temple, marking the end of the meditation period.  The temple is well known for its association with martial arts (the seventh Wu-Tang Clan album was called Once Upon a Time in Shaolin).

'... darkened ledges glistening with water
towering trees encircled with vines
the torrent divides into different streams
with eddies swirling beside the current. ...'

Hsiangshan (Incense Mountain) was across the river from Lungmen (Dragon Gate), ten kilometres from Loyang. Wei admired the seclusion of these jade springs, finding it hard to leave.

'White water surges along the embankment
mist swirls in a sunny sky
green is taking over the trees
there's jade on a thousand mountains. ...'

Huhsien is fifty kilometres southwest of Ch'ang-an - relative to Paris this is further than Versailles but nearer than Chartres. The reservoir he mentions here was formed where the Mei river met the Laoyu river and in a later poem Wei calls it a 'boundless clear lake'. Tu Fu (Du Fu, 712-70) had written a poem about boating on it.

Wei stopped for the night at Hsuyi, a post station on the Huai river, while journeying from Ch'ang-an to take up a new post at Chuchou. The nearest city on my map to Chuchou would be Zagreb, so he had done the equivalent of travelling from Paris through Germany, then south through Austria to Slovenia.  In heading south, he was like the wild geese.

'I love unnoticed plants that grow beside a stream
orioles singing overhead somewhere in the trees
at dusk the current quickens fed by springtime rains
I pull myself across on an unmanned country ferry.'

This is the entire poem - four lines of description, written after a day in the countryside west of Chuchou. But possibly there is some symbolism here: neglected plants = unappreciated officials, orioles = unheeded advisers, and having to pull across the river = looking out for yourself in politically turbulent times.

'... the tiger tracks in the mud look fresh
as we mount up the sun finally breaks through
I survey the landscape of dawn
flowers are as dense as fog...'

This was written of a journey on horseback in heavy rain.  Lushan is the famous mountain that I have discussed here before.  It was near Chiangchou, where Wei became a magistrate in 785. The city is located about where Bologna is on my map.

'... I love to follow trails to monastic retreats
to an orchard of fruit trees after a rain
a terrace of incense lit by the dawn
where green shade nurtures quiet days...'

Having returned from Chingchou to Ch'ang-an (the equivalent of a journey from Bologna to Paris) Wei was appointed to Souchou in the Yangtze Delta (back down south - equivalent to.northern Bosnia).  Kaiyuan temple was to the south of the city.  This is from one of his last poems.  He died a year later, too ill to return to Ch'ang-an.
Posted by Plinius at 7:26 pm