The holy mount for the Festival of the Supreme Being 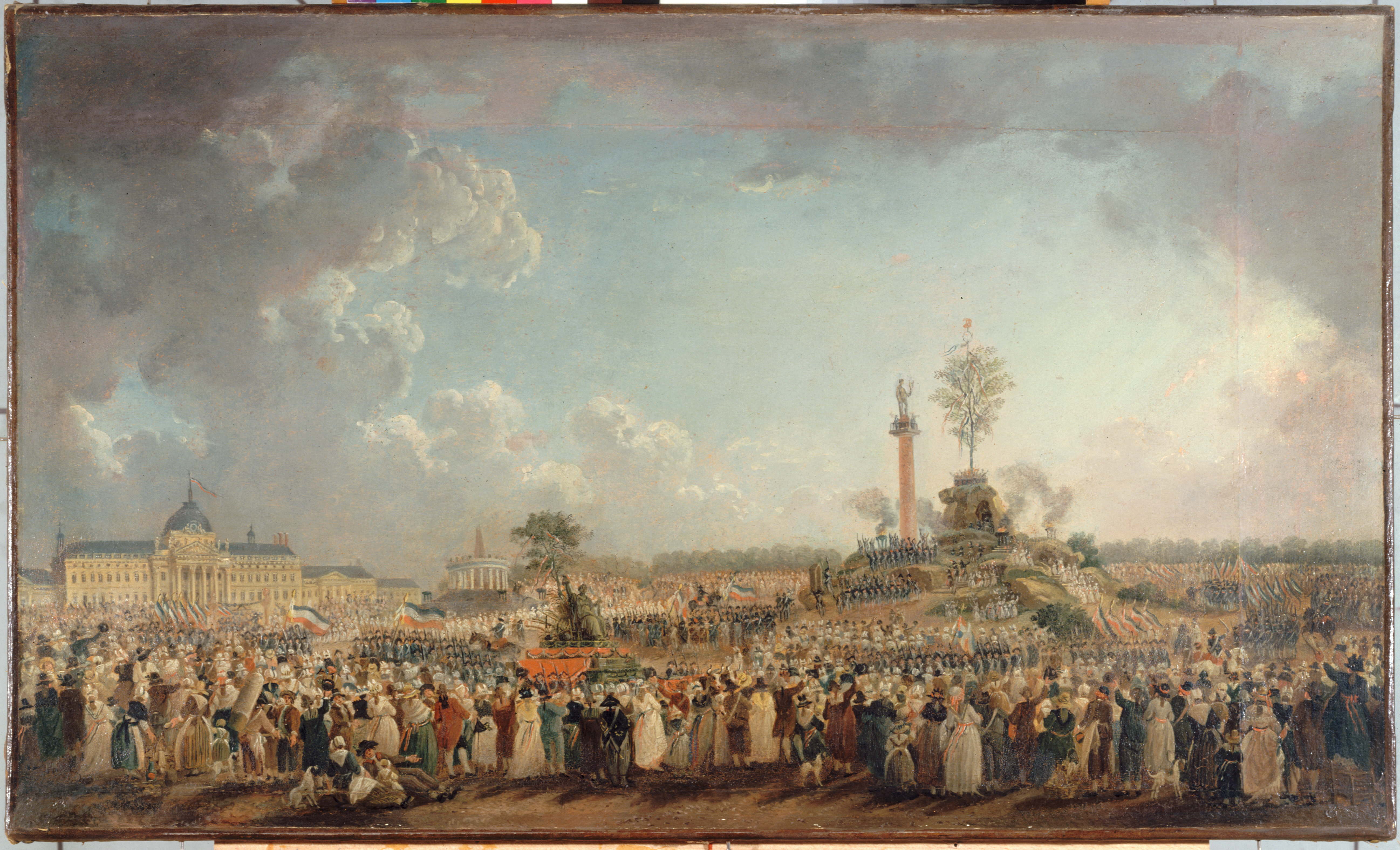 Pierre-Antoine Demachy, The Festival of the Supreme Being, 1794

On 8 June 1794 (20 Prairial Year II) an artificial landscape was erected in the centre of Paris.  This day had been chosen for the first Celebration of the Supreme Being, a new godhead devised by Robespierre, then at the zenith of power.  He had been elected President of the Convention four days earlier; less than two months later he would be guillotined without trial in the Place de la Révolution.  The landscape was designed by the great revolutionary artist Jacques-Louis David.  A plaster-and cardboard mountain topped with a liberty tree was built on the Champ de Mars.  That afternoon, as Simon Schama writes in Citizens, 'deputies of the Convention climbed to the summit and looked down to the twenty-four hundred deployed along the paths, slopes and terraces that had been cut into the mountain.  At a crucial moment, when the singing and blaring of martial brass had been silenced, Robespierre descended from the mountain like some Jacobinical Moses, parting the waves of tricolored patriots, and graciously received the burst of orchestrated applause that broke over his head.'  Jacques-Alexis Thuriot, a former president of the Convention, was heard saying, "Look at the bugger; it’s not enough for him to be master, he has to be God". 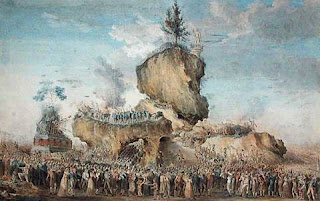 Thomas Naudet, Festival of the Supreme Being at the Champs-de-Mars, 1794

What kind of mountain would be adequate for the Supreme Being?  Not, it would seem from contemporary prints, a perfectly shaped one.  In his book Political Landscape, in a section that discusses the perennial desire of leaders to carve massive statues and faces into mountains, Martin Warnke remarks on this:


'The mount as a whole appears strangely rugged, as if its irregular shape had been copied from works by Mantegna; what we see is a kind of nature monument that could be construed as an enormous head, but the caverns, paths and platforms also serve to direct the movement of the crowd: the men march on the right, the women on the left; the young people march round the hill, and a special commissaire sees to it that there is no confusion.  Only optically does the landscape admit of irregularity and contingency.  It belongs to the type of fantastic landscape that once rose towards gold skies in the backgrounds of altarpieces, in the early days of landscape painting.  Yet the overall physiognomy of the rock still has some of the impressive force attributed to faces in mountains.'