I have been reading the new anthology of John Berger's art writing, Portraits.  It is arranged in approximate chronological order from the Chauvet cave paintings to some recent sculptures by a young Palestinian artist. Where Berger has written more than once about an artist, the pieces are spliced together and you have to look to the end of the book to see when the component parts were written.  Although there are risks of repetition in this (e.g. reading twice a story about Monet painting his wife on her death bed) it actually works rather well.  On Gustave Courbet, for example, there is a 1953 essay defending his critical reputation and concluding that socialism was expressed in his work 'by its quality of uninhibited Fraternity'.  This is followed by something written twenty-five years later, by which time a new generation of art historians had written major studies reassessing Courbet's art.  I will quote from this second piece, 'Courbet and the Jura', below.

Five hundred pages long, Portraits is a rich source of ideas and insights on a wide range of artists, all written in Berger's marvellous, clear prose.  One small gripe though: for a book about art, it has surprisingly poor black and white images.  I couldn't help comparing them with the beautiful small colour reproductions in Robert Walser's Looking at Pictures, another set of essays published last year (a book I highly recommend).  This was a deliberate choice: Berger says in the Preface that 'glossy colour reproductions in the consumerist world of today tend to reduce what they show to items in a luxury brochure for millionaires' (which may be true, but one would have more sympathy with this if Verso weren't charging £25 for the book).  In the case of Courbet though, no reproductions in book or web page or smart phone would be able to do justice to a monumental painting like A Burial at Ornans, which is nearly 8m wide and covers a whole wall in the Musée d'Orsay.

Berger is fascinating on the geographical origins of Courbet's art. In 'Courbet and the Jura' he writes that 'the region in which a painter passes his childhood and adolescence often plays an important part in the constitution of his vision. The Thames developed Turner.  The cliffs around Le Havre were formative in the case of Monet. Corbet grew up in – and throughout his life painted and often returned to – the valley of the Loue on the western side of the Jura mountains.'  The heavy rainfall in this region sinks into the karst landscape's underground channels and gushes out powerfully as the river Loue.  'On the horizontal strata of limestone there are often marl deposits which allow grass or trees to grow on top of the rock. One sees this formation – a very green landscape, divided near the sky by a horizontal bar of grey rock – in many of Courbet's paintings, including A Burial at Ornans.' But this environment offered more than just background scenery, according to Berger it influenced the forms Courbet's paintings took. 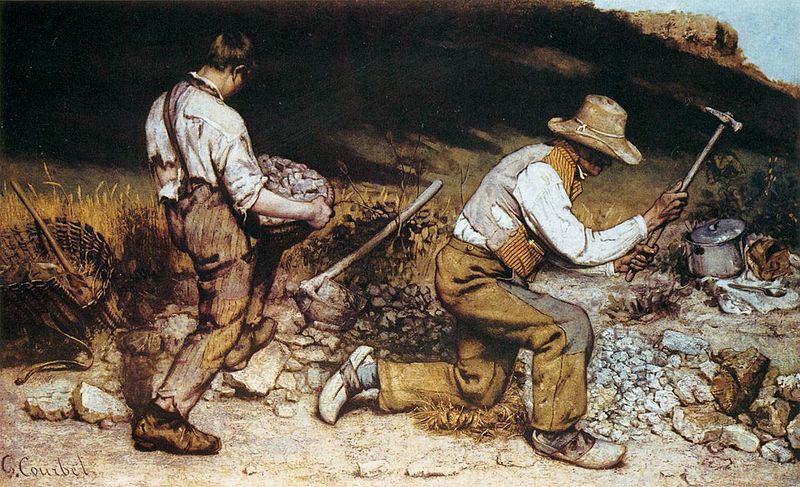 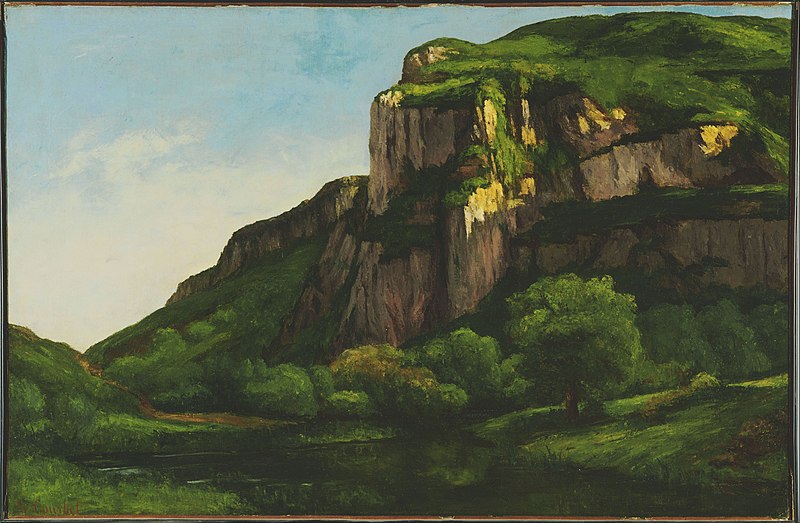 Gustave Courbet, Rocks at Mouthier, c. 1855
Images from Wikimedia Commons
Posted by Plinius at 11:35 am