A Ruin on the Road 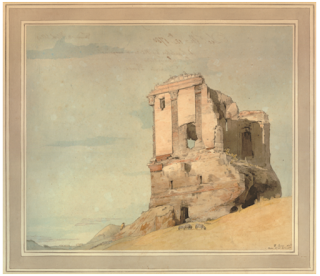 Francis Towne, A Ruin on the Road to the Ponte Nomentana, 1780

Yesterday I visited the British Museum for Light, time, legacy: Francis Towne’s watercolours of Rome.  The exhibition is curated by Richard Stephens, whose Catalogue Raisonné will soon be appearing online.  This is based on the PhD. Richard was still completing when he commented on a post I wrote here ten years ago referring to Francis Towne.  Back then I was sharing a favourite passage from the diaries of Thomas Jones, another painter rediscovered in the twentieth century.  Jones had taken Towne sketching in the countryside near Naples.  There they encountered 'three ugly-looking fellows dressed in the fantastic garb of the Sbirri di Campagna, with long knives, cutting up a dead jackAss… Towne started back as if struck by an electric Shock… "I'll go no further" says he, with a most solemn face, adding with a forced smile, that however he might admire Scenes in a Picture - he did not relish them in Nature.' 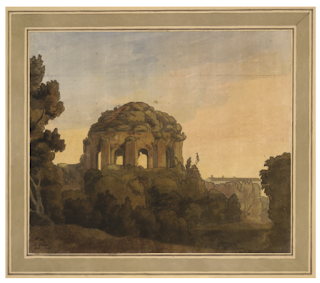 While he stayed in Rome, Towne also left the environs of the city to paint the surrounding countryside.  However, as Jonathan Jones points out in his  review of the exhibition, by 1780 the city itself had become a picturesque landscape.


'Towne’s Rome is not a modern living city: it’s a woodland dotted with half-collapsed temples, a meandering countryside populated by a few peasants, antiquaries and market traders, dwarfed by the melancholy remains of a greater past.  While Towne was wandering the seven hills of Rome, the historian Edward Gibbon was six years into writing The History of the Decline and Fall of the Roman Empire. Their visions of Rome are remarkably similar. Gibbon’s masterpiece is an awed attempt to understand how something as vast and powerful as the Roman empire could vanish. Towne’s watercolours ask that same question: what has happened in these sleepy valleys and woods? Temples and palaces that once ruled a huge part of the world are now the decaying picturesque decorations of a pastoral landscape where time seems to have slowed down like the meandering Tiber.' 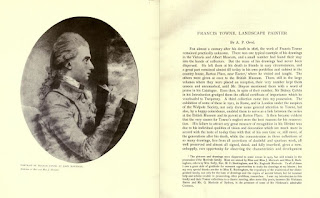 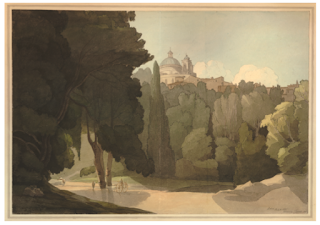 The exhibition refers at several points to the revival of interest in Towne's work following his rediscovery and promotion by the collector Paul Oppé.  'Modernist taste of the 1920s and 1930s embraced the flat planes and spare, angular design of drawings like Arricia and Towne was feted as a pioneer.'  It made me wonder how future generations will look back on the more recent excitement over landscape paintings by Balke and Strindberg (which I discussed here).  I confess I usually find myself agreeing with modernist taste and for me the high points of this exhibition are the works they found most admirable.  Hard too not to envy Oppé, then a young civil servant at the ministry of education, who bought a bunch of uncatalogued watercolours in 1907 for 25 shillings that included several works by Towne, including A Study on the Spot at Tivoli.  The closest I'll ever get to owning a sketch of Tivoli is to paint one myself...  Having tried this on a couple of holidays, wrestling with the strong light contrasts and struggling to unify details of pine branches, Roman brickwork and distant ruins, I'm in awe at the way Towne achieved his elegant compositions.  As Laura Cummings writes in another Guardian review: 'he puts together a version of the great outdoors of exceptional lucidity – the world contained in limber lines, its colours pearly with light and marked by the ever-shifting atmosphere.' 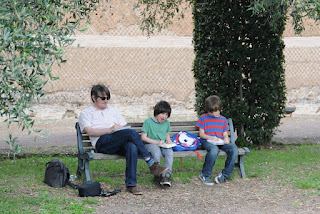 "Gibbon’s masterpiece is an awed attempt to understand how something as vast and powerful as the Roman empire could vanish."

You will find some interesting answers here:
http://oyc.yale.edu/history/hist-210