The sound of wind in the pines

'The innkeeper had lent him an old Kyoto tea-kettle, skilfully inlaid in silver with flowers and birds, and from it came the sound of wind in the pines.  He could make out two pine breezes, as a matter of fact, a near one and a far one.  Just beyond the far breeze he heard faintly the tinkling of a bell.'

A quote that links my last two posts on wind in the trees and the snow in Japan. I first read this novel at university and scenes from it have stayed with me ever since, like the opening in which the protagonist travels north to the Snow Country, looking at the reflection of a woman superimposed on a snowy landscape in the mirror of his train compartment.  This quote comes towards the end and it is referred to by R. Murray Schafer in an essay on 'Music and the Soundscape' as an exemplification of the music of the Japanese kettle which Okakura describes in this passage from The Book of Tea.


'The host will not enter the room until all the guests have seated themselves and quiet reigns with nothing to break the silence save the note of the boiling water in the iron kettle.  The kettle sings well, for pieces of iron are so arranged in the bottom as to produce a peculiar melody in which one may hear the echoes of a cataract muffled by clouds, of a distant sea breaking among the rocks, a rainstorm sweeping through a bamboo forest, or of the soughing of pines on some faraway hill.'

That last sentence suggests a level of expertise on behalf of the tea master in adjusting the inside of a kettle like a prepared piano so as to evoke a particular feeling in nature.  No need of music or poetry to suggest these things when the process of making the tea creates its own soundscape.  I wonder if any modern sound artists have attempted to manipulate recordings of boiling water, or augmented them with field recordings to recreate these effects, or tried to pursue the original idea of simply using 'pieces of iron'?  I would love to know more about the landscape music of Japanese kettles; whilst the whisper of the boiling water is named Matsukaze after the sound of wind in the pines, the idea that different effects - sea, rain, a cataract - could be produced by manipulating the kettle is intriguing.  But perhaps there was some poetic licence in Okakura's account, written in English for an eager audience of Boston aesthetes (T. S. Eliot would later picture him in an art gallery, 'bowing among the Titians', as 'Hakagawa' in his poem 'Gerontian'). 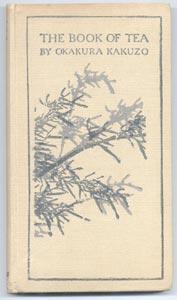 Sen Sōtan, grandson of the great Sen no Rikyū, wrote that the essence of the tea ceremony, Cha-no-yu, could be described as 'the sound of wind-blown pines in a painting.'  In his book Zen Landscapes Allen S. Weiss points out that the kettle-wind sonic trope could be reversed, as it is at the end of an account of Hideyoshi's great Cha-No-Yu at Kitano in 1587.  Hideyoshi was Japan's most powerful politician and Sen no Rikyū was among the tea-masters at Kitano (four years later Hideyoshi would order Rikyū to commit ritual suicide for reasons that remain mysterious). The account of the gathering at Kitano is told in A. L. Sadler's Cha-no-yu: The Japanese Tea Ceremony (a copy of which I bought many years ago in the book section of that much-missed emporium near Covent Garden, Neal Street East).

'Toyotomi Hideyoshi, Kwanpaku, was a dilettante who always liked to do things on a large scale.  He conceived the idea of assembling all the Tea masters in the country and collecting all the rare tea vessels for a huge Cha-no-yu. ...

And so the meeting was held as arranged, and everywhere in the wide open space under the pines at Ukon-no-baba at Kitano tea-enclosures were made in a setting of plum trees and rocks and pools of water, and all the tea lovers flocked thither and did their utmost to see who could produce the most interesting and recherche effect.  The whole extent of the gathering was about a mile square.  Fortunately the day was a fine one, and Hideyoshi with all his nobles and retainers set out at daybreak to find some five hundred and fifty tea-masters assembled, while immense crowds of spectators appeared from all over the country, and the number of the fires that were lighted under the kettles seemed greater than that of the stars in the autumn heaven. ...

Very great was the joy and enthusiasm of the people, and the display would have continued for ten days as arranged, but unfortunately a rebellion broke out in Higo, and Hideyoshi had to break up the meeting after one day only, so that all the carefully prepared tea-booths were soon taken down and the glade resumed its wonted quiet.  And only the sound of the wind in the pines, which again resumed their sovereignty over the landscape, remained to recall the bubbling of a thousand kettles.'