Study of Rocks and Trees 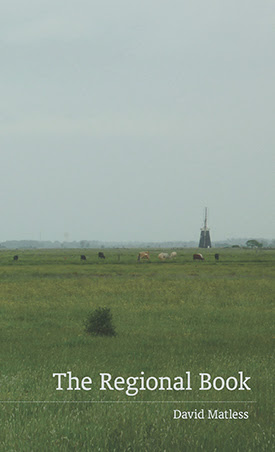 The Regional Book by David Matless was reviewed back in October by Ken Worpole on his New English Landscape blog.  He summarises it as 'a gazetteer of 44 Norfolk places, each described in telegraphese, halfway in style between Pevsner and the poet Roy Fuller.'  The book's style is indeed unusual, its highly abbreviated sentences reflecting the flatness of the landscape described, its cadences often reminding me of crossword clues.  Rather than discuss the book as a whole and risk repeating what Ken says, I want here to mention just one of the entries, on Norwich Castle Museum.  It's hardly a representative location but the section begins like others, with a spatial location and succinct description: ‘Ten miles from the Bure, one from the Wensum, on a Norman mound. The region on display in paint and diorama.’ A list of local subjects treated in the museum's paintings it terminates thus: ‘Studies in landscape, Langley’s scrutiny: uninventable.’ The solution to this cryptic reference can be found towards the end of R. F. Langley's wonderful journals (Helen MacDonald's desert island book).  Matless is referring to an entry for August 2005, when Langley stopped and studied the Museum's paintings with the kind of long, close attention I've written about here before.

What Langley most admired were the watercolours of John Middleton (1827-56), particularly a Study of Rocks and Trees.  'The left side is ghosted in, a rising track, the right an equally hinted slope falling away with sky open behind it.  The foreground is out of focus rocks and clitter, done with the slightest washes and touches.  The centre is thus presented as altogether important, with the feeling of air around your head as you look at it, space where you are not looking.’ He describes the knots and gnarls and bulges of the trunks, patches of lichen found by the sun and branches twisting in unpredictable ways.  ‘Shadows jink over the individuality of irregularities.  The whole is done without any mess, everywhere with flair.’ Langley, writing of Middleton in a way that could easily be a description of his own prose and poems, finds that ‘nobody else has done the looking that was involved like this.  A study.  Indeed.’  Nothing else in the gallery that day had quite this quality of an actual place found, unique and ‘uninventable’.  The tree Middleton painted is a kind of challenge to the way we experience art and landscape.  ‘It makes fools of those who pass down the corridor with only a glance, as it does those who stroll down the lanes without being brought to a stop.  Seeing it like this must matter.’ 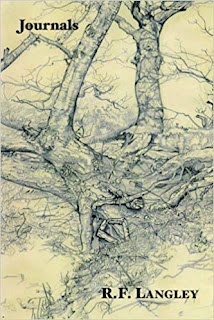 The cover of the book is a drawing made by the author in 1962
(I cannot find an image of John Middleton's painting, but this looks to have ths same uninventable quality)
Posted by Plinius at 4:18 pm