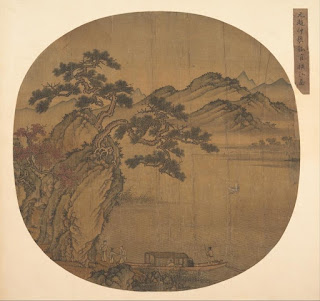 Earlier this year I wrote about the Battle of Red Cliff, focusing on landscape in the poetry of Cao Cao, the warlord whose army was defeated there by the combined forces of Sun Quan and Liu Bei.  The battle's most famous literary retelling is in The Romance of the Three Kingdoms, one of the Four Great Classical Novels of China (I discussed one of the others, Dream of the Red Chamber, here five years ago).  There is no dwelling on natural scenery in The Romance of the Three Kingdoms - the focus is entirely on the action, one of hundreds of battles in this vast novel covering an extraordinarily turbulent historical period.  But The Romance of the Three Kingdoms is only one lens through which the conflict has been remembered, as you can see in A Thousand, Thousand Churning Waves - The Legendary Red Cliff Heritage, an online exhibition at the Taiwan National Palace Museum.  Here I want to focus on the influence of Su Shi's two Red Cliff Odes, written in 1082, three centuries before The Romance of the Three Kingdoms.  These two poems have themselves been the inspiration for artworks in many forms; I mentioned one - a stone seal - 1,002 posts ago, and have included some others here: a fan, a vase, a scroll, a plate and another stone seal. 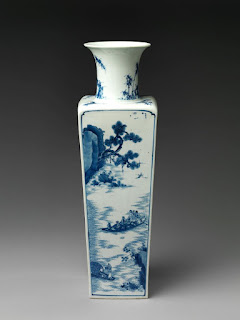 The two 'Odes' Su Shi wrote were in the wen fu form - fu were prose poems, and the wen fu was more prose than poem.  Burton Watson includes translations in his wonderful Selected Poems of Su Tung-p'o (Tung p'o means Eastern Slope and was the literary pseudonym Su assumed after building a residence on a Huangzhou hillside in 1081, thus incorporating a landscape feature into his actual name).  I will summarise the two poems here, with the knowledge that this can't really do them justice - they are very beautiful even in translation, so it does not seem surprising that they have been so admired in China over the last thousand years.  Just one thing to note though: the landscape that so moved Su Shi was not really the place where Cao Cao's forces were defeated in 208 CE (the precise location is still disputed).  As Burton Watson writes, 'because of its fame, many other spots on the Yangtze came to be called Red Cliff; the one where the poet and his friends are the spending the evening is not the actual site of the battle but considerably farther down the river.'

The First Ode.
On an autumn night, Su Shi and some friends ventured out in a small boat to the foot of Red Cliff, drinking wine and admiring the moon.  'White dew settled over the river, and its shining surface reached to the sky.  Letting the boat go where it pleased, we drifted over the immeasurable fields of water.'  Inspired by the wine and the scenery Su composed a song while one of his friends played mournful notes on the flute.  They remembered the poem Cao Cao composed (see my earlier post) and his vast army on the river, 'yet where is he now?'  Su Shi suggested that they should take comfort in the changelessness of things - the river water never ceases to flow and the moon always rises.  Realising they had nothing left to eat, the friends lay down in the boat to sleep, 'unaware that the east was already growing light'. 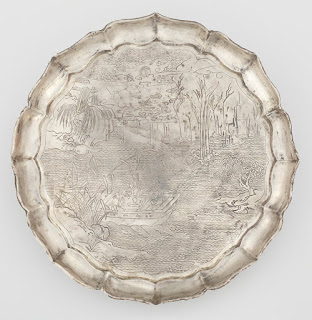 The Second Ode.
Later that autumn, with the trees bare and frost on the ground, Su Shi was joined at his home by two guests.  They decided to make another trip to Red Cliff but when they got there Su realised the landscape had changed.  'The river raced along noisily, its sheer banks rising a thousand feet.  The mountains were very high, the moon small.  The level of the water had fallen, leaving boulders sticking out.'  Su begun to climb the embankment, leaving his friends trailing behind.  At the summit he gave a shrill whoop and the trees and grass swayed.  A wind suddenly rose and he felt a chill of fear.  He returned to his friends and they got back into the boat, letting it drift on the water.  A single crane flew in from the east, swooping low over the boat.  That night, back at home, Su dreamed that a Daoist immortal in a feather robe came to him and asked whether he had enjoyed his outing to Red Cliff.  Su recognised him as the crane.  The immortal just turned and laughed and when Su woke up, he was gone. 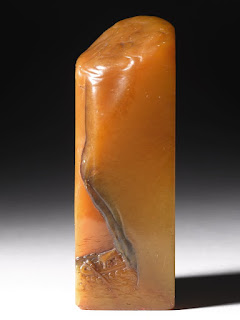