Earlier today I was looking at these images while listening on headphones to a recording the BBC reporter Wynford Vaughan Thomas made during an air raid on Berlin.  His voice was clear over what he described as the constant noise of the Lancaster bomber's engines, though his oxygen mask made speaking difficult.  These masks "reduced to uniformity" the individuals in the crew, men like the plane's bomber who before the war had been "a Sussex farmer".  As I listened, I imagined "the enemy coastline" looking something like the first of these two ambiguous images.  Then I began to see them as clouds the aircraft passed through as it approached the city.  Once the attack began, they came to resemble explosions of flack surrounding the bomber as it dodged the German searchlights.  Finally I thought of the dust, smoke and debris that would be left behind by the bombing mission.  These two drawings, chalk on slate, are by Tacita Dean and were specially made for this exhibition, Melancholia: A Sebald Variation.  The recording of the air raid is described in W. G. Sebald's book, On the Natural History of Destruction.

For me, one of the highlights of this small show was being able to see a selection of photographs from the W. G. Sebald archive in Marbach.  In addition to the two examples above, there were images of Vesuvius erupting, a man on a bicycle, a rocking horse, a young girl, a prosthetic leg, an isolated building and a group of people attending to something we cannot see.  Some of Sebald's photographs are reproduced in the small catalogue you can pick up for free (see below).  In another room there were photographs of the ruins of Dresden and a vitrine containing books on the Allied bombings, including Der Untergang by Hans Erich Nossack which Sebald particularly praised in his 'Air War and Literature'.  Two of Wilhelm Rudolph's ink drawings from the series 'Dresden in Ruins' looked at first glance like sixteenth century prints.  You come to them immediately after looking at the etching that gives this exhibition its title, Albrecht Dürer's Melancholia (1514). 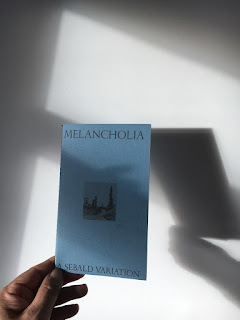 In addition to Tacita Dean's drawings, there were works by other contemporary artists I have discussed on this blog before: Anselm Kiefer, Susan Hiller, Dexter Dallwood, George Shaw.  After seeing these - all of which I thought well chosen - I pushed open a Sebaldian black velvet curtain to watch a video work by Guido Van der Werve.  I was instantly confronted with the sight of a man on fire, running past an orchestra and into a canal; this was followed by a sequence in which a dark figure (the same man?) swam purposefully down various rivers for reasons that were a mystery.  I was just thinking how effective this was when the figure got out of the water and onto a bike (see below).  It transpired that he was doing an epic triathlon across Europe, which seemed a disappointingly unSebaldian pursuit, even if it did involve carrying some soil from the Polish church where Chopin's heart is buried.  I left him to it and returned through the curtain.  Before leaving, I spent a few minutes watching footage of Sebald himself, in an interview with Susan Sontag filmed two months before his death.  Then I headed out, back past the images of ruin and Dürer's Melancholia.  'For Sebald,' the curators write, 'melancholy was the only possible response to the brutality of the past.' 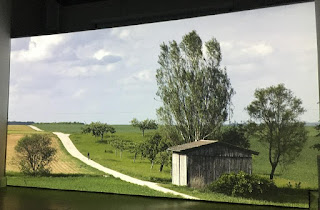 I agree that this is a wonderful exhibition, Andrew, which continues until the 10 December, but also agree that the film by Guido van de Werve is somewhat risible, a waste of terrific filming commemorating a tragic story, trivialised by attaching it to a Triathlon exercise (surely not a metaphor?). The Lancaster bombing recording is unearthly and humbling.

Thanks Ken - yes to all this. Well worth visiting - Mrs Plinius has now been too and very much enjoyed it.