The ghats at Haridwar 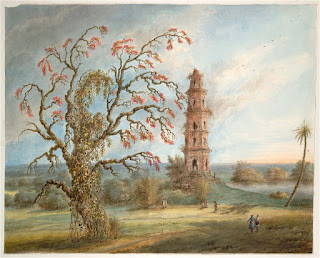 Sita Ram, The Firoz Shah Minar at Gaur and a Palash tree, 1817

This watercolour is owned by the British Library and is one of several reproduced in a fascinating blog post by J. P. Losty, 'The rediscovery of an unknown Indian artist: Sita Ram's work for the Marquess of Hastings'.  The work of Sita Ram first attracted attention when some paintings of his were sold in 1974, with no real clue as to who he was or who had commissioned them.  From these and a few subsequent discoveries, scholars knew that he must have been working in Calcutta around 1810-15.  It was only in 1995 that his identity was pinned down (see India Today, 'An unknown painter of great talent emerges from the past').  This was when, as Losty writes, the BL was offered


'part of the collection of albums of drawings formed in India by the Marquess of Hastings, the Governor-General of Bengal 1813-23. The ten albums by Sita Ram illustrate Lord and Lady Hastings’ journey from Calcutta to Delhi and back in 1814-15. There were in all 25 albums of drawings in the collection, by Indian, Chinese and British artists. They had been for the last 150 years in the collection of the Marquis of Bute in Scotland, and indeed hitherto unknown and unsuspected.'

This sort of story always makes you wonder what might still be buried in the homes of our aristocratic families.  I can find no comment from the current Marquess on this discovery; I see from Wikipedia that he is a former racing driver who actually made the Lotus Formula 1 team in 1986.  Sita Ram's paintings are now accesible to all and can be viewed in a handsome-looking book written by Losty for Thames & Hudson, which includes edited highlights of Lord Hastings' journal. 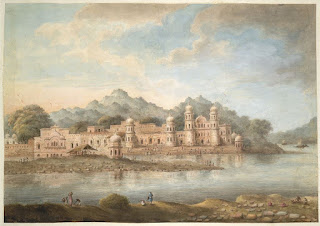 The watercolour above is one of the views Sita Ram painted on the Hastings' journey, showing the the holy city of Haridwar.  The entire seventeen-month trip took the Hastings from Calcutta to the Punjab and back, accompanied by officials, bodyguards and an army battalion.  When they left in 1814 they needed 220 boats.  After they got back, in October 2015, Sita Ram continued to work for Hastings in India.

'Another two albums of drawings also by Sita Ram contain views in Bengal taken on subsequent tours, one during a sporting expedition to northern Bengal in 1817, and the other during a convalescent tour in the Rajmahal Hills in 1820-21. Sita Ram has matured even more as an artist by then and they contain some of his most beautiful works. With Hastings’ departure from India in 1823, however, Sita Ram disappears from the record and no further work is known from his hand.'

Email ThisBlogThis!Share to TwitterShare to FacebookShare to Pinterest
Location: Gaur