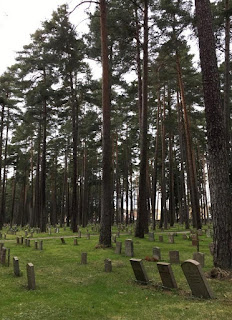 I was in Stockholm for a meeting in May and took the opportunity to visit Skogskyrkogården, the famous Woodland Cemetery which in 1994 became only the second location developed in the twentieth century to become a UNESCO World Heritage site.  It was late on Sunday afternoon when I got there - the visitor centre was shut but I had the place almost to myself.  A couple of other tourists, one person tending a grave, a solitary jogger (they are everywhere).  I took a short video clip on my phone (below) which gives a sense of how peaceful it was, though you could never escape the low background rumble of traffic.  I'm not sure how many deer there are in these woods; another one emerged from behind these graves just after I stopped filming.  They were watchful but not fearful.  It did not seem that surprising to find them there - even here in London when you step into a graveyard like Abney Park Cemetery, near my home in Stoke Newington, you become aware that you are among squirrels, birds and butterflies.


Skogskyrkogården was conceived jointly by architects by Gunnar Asplund (1885-1940) and Sigurd Lewerentz (1885-1975), who won a competition in 1915 to design a new cemetery on the site of an old quarry.  In addition to the landscape, they designed distinctive buildings - a classical Resurrection Chapel positioned at the end of a long tree-lined path, an intimate Woodland Chapel amid the pines, and a graceful and a functionalist crematorium.  From this crematorium you look across a pond towards a bare slope on the summit of which is a group of trees.  On my visit this meditation grove was a dark silhouette against a white sky which would soon be filling Stockholm with unseasonable snow.  But you can see the trees in full leaf on the cover of Ken Worpole's fascinating book, Last Landscapes: The Architecture of the Cemetery in the West (2003).  From the vantage point of this photograph (by Larraine Worpole), the foreground is dominated by Asplund's stark granite cross, inspired by Caspar David Friedrich. 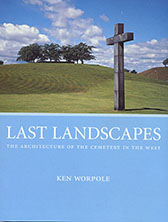 On the occasions I have visited graveyards over the years, there has usually been at least one prominent memorial I've been keen to find - Ezra Pound at San Michele near Venice, Alejo Carpentier in Havana's Colon Cemetery, Karl Marx at Highgate, dozens of culture heroes at Père Lachaise...  Wandering around the Stockholm Woodland Cemetery it was something of a relief just to be experiencing the landscape, without looking for anybody famous.  Nevertheless, I did come upon the grave of Greta Garbo, whose family chose this for her because it was 'a long way from the hustle and bustle of the world'.  There is no eye-catching monument to the great movie star, but neither is it the case that she is simply buried in an egalitarian spirit along with all the others.  Her headstone stands isolated against the trees -  fittingly perhaps for someone famous for saying "I just want to be alone".  It seems to have the makings of a shrine: a path has been laid to it and, as you can see below, trees are being planted in a semi circle to form a kind of special enclosed space. 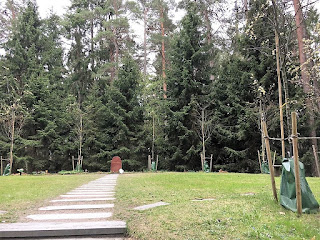 There are no film stars buried in Abney Park Cemetery, though you can find a famous nineteenth century music hall artist, George Leybourne, the original 'Champagne Charlie' - a fact mentioned in Last Landscapes (Ken lives near me in Stoke Newington).  I would agree with Ken that despite the efforts of the Abney Park Trust, it is still in parts 'a forlorn, tangled forest', very different from the woods of Skogskyrkogården.  Originally the early Victorian London cemeteries were designed as Gardenesque landscapes - John Claudius Loudon published an influential book on the subject in 1843.  Abney Park Cemetery Originally (which opened in 1840) was designed as an arboretum and became a kind of tourist attraction like Kew Gardens.  As the population grew it rapidly filled up, but perhaps in its early days it would have had something of the atmosphere of a woodland cemetery.  Today they are very different: as Ken says, the Stockholm Woodland Cemetery gives the impression when you enter it of 'a vast rolling landscape, with deep forest beyond', yet you quickly come upon intimate, peaceful spaces for tranquil reflection.  It is, he concludes, 'the most successful example of large-scale landscape design in the twentieth century.'
Posted by Plinius at 7:00 am

Many thanks for this post, Andrew, and the kind remarks. What has been lost today are the large funeral processions which once accompanied many funerals, on foot, with banners and wreathes, and which can be seen in many archive photographs of the Stockholm Woodland Cemetery. As I once was transfixed by this landscape - and still am - I now feel similarly about Enric Miralles' cemetery at Igualada in Spain, which seems to me a worthy 21st century successor. These places are so very important.

Thanks Ken - I have written a follow-up post on Igualada.

Our energetic local historian Amir Dotan has some old images of big funerals at Abney Park Cemetery, e.g. Mr Braidwood, chief of the London Fire Brigade 1861 - would be nice if the head of such an important local public service had a send off like this today.