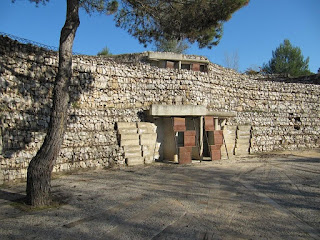 Commenting yesterday on my post about the Stockholm Woodland Cemetery, Ken Worpole, author of Last Landscapes: The Architecture of the Cemetery in the West, mentioned his high regard for the modern cemetery at Igualada in Spain.  Ken has also kindly sent me three photographs which I have included here (an ArchDaily article on Igualada has more images, including some taken after a snowfall).  Enric Miralles designed the cemetery with his partner Carme Pinòs in 1984 and it was constructed over the following decade.  In Britain, Miralles is best known for the Scottish Parliament Building which was completed after his early death in 2000 (he is buried at Igualada). Writing last year in The Architectural Review, Ken notes that Igualada 'is in harsh rocky terrain punctuated by quarries' and so the architects made use of this in their design, incorporating rusting steel, old railway sleepers, quarried stone.  The result is somewhere that 'possesses a profound spiritual presence within its severe landscape: serious and purposeful without being in any way morbid.' 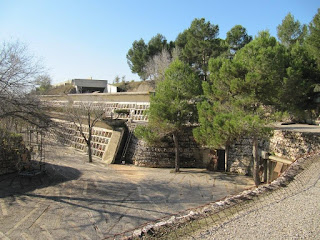 I have not visited Igualada myself (though we weren't that far away a couple of summers ago).  I will therefore quote here some impressions by two British architects, Joe Morris and Mary Duggan, interviewed in Building Design.


'The work is like no other we had come across. It is an architecture of the land, a work which choreographs the geological and sculptural qualities of the landscape; an architecture of topography. The narrative, one in which the living are brought downwards into a city of the dead, is potent and creates an eerie but contemplative series of spaces.

'The palette of materials speaks of the site. It is reduced to materials which over time will express the ravages of time and weather and are intended to be subsumed by the landscape within which they sit. Concrete, granite, Corten, each material is selected for the visceral illustration of its origin, forged or excavated from the earth, and slowly returning to the landscape.' 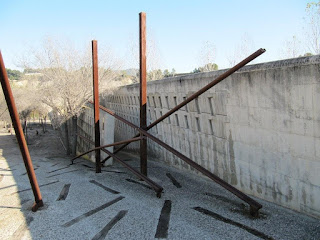 And to conclude, from a lengthier more theoretical article by Tom Bliska, here is another reflection on the way the architects worked with space and time:


'Miralles and Pinos are serving as “exegetes of the landscape,” drawing from the site’s history and local landform precedents to create a space that is itself a program. Every cemetery has an explicit connection to the past, in the sense of a distorted reflection of the city that produced it, but Miralles and Pinos are specific in creating traces of the past through articulation of fragments, frameworks, and the path one takes through them. The long walk down to the mausoleum plaza at the low point of the site is filled with the “immediate and imperfect”: rough aggregate ground surface, violently skewed steel markers, indeterminate edges between precast concrete and gabion wall. It is this layering that builds the narrative quality of the space, boundaries that shift with movement and tactility to present an abstracted history of the site itself as process. In this way, Igualada cemetery can be read as a chronotopia, a space where fragments of the past are either exposed or rearticulated didactically to express the meaning of the site’s current form.'