View of the Garden of the Villa Medici 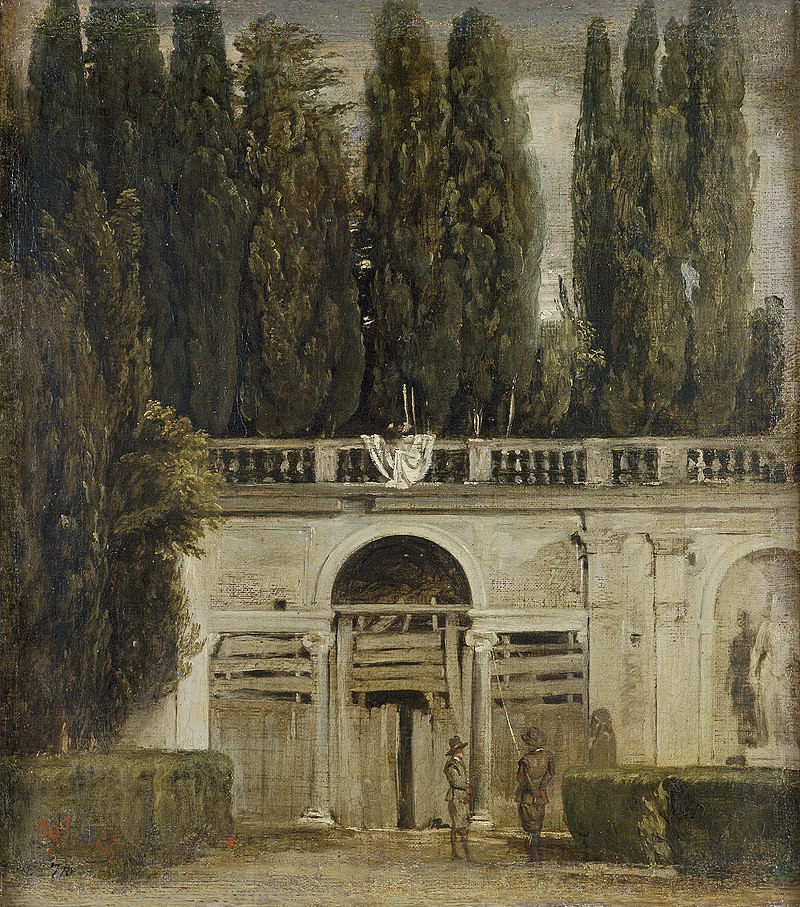 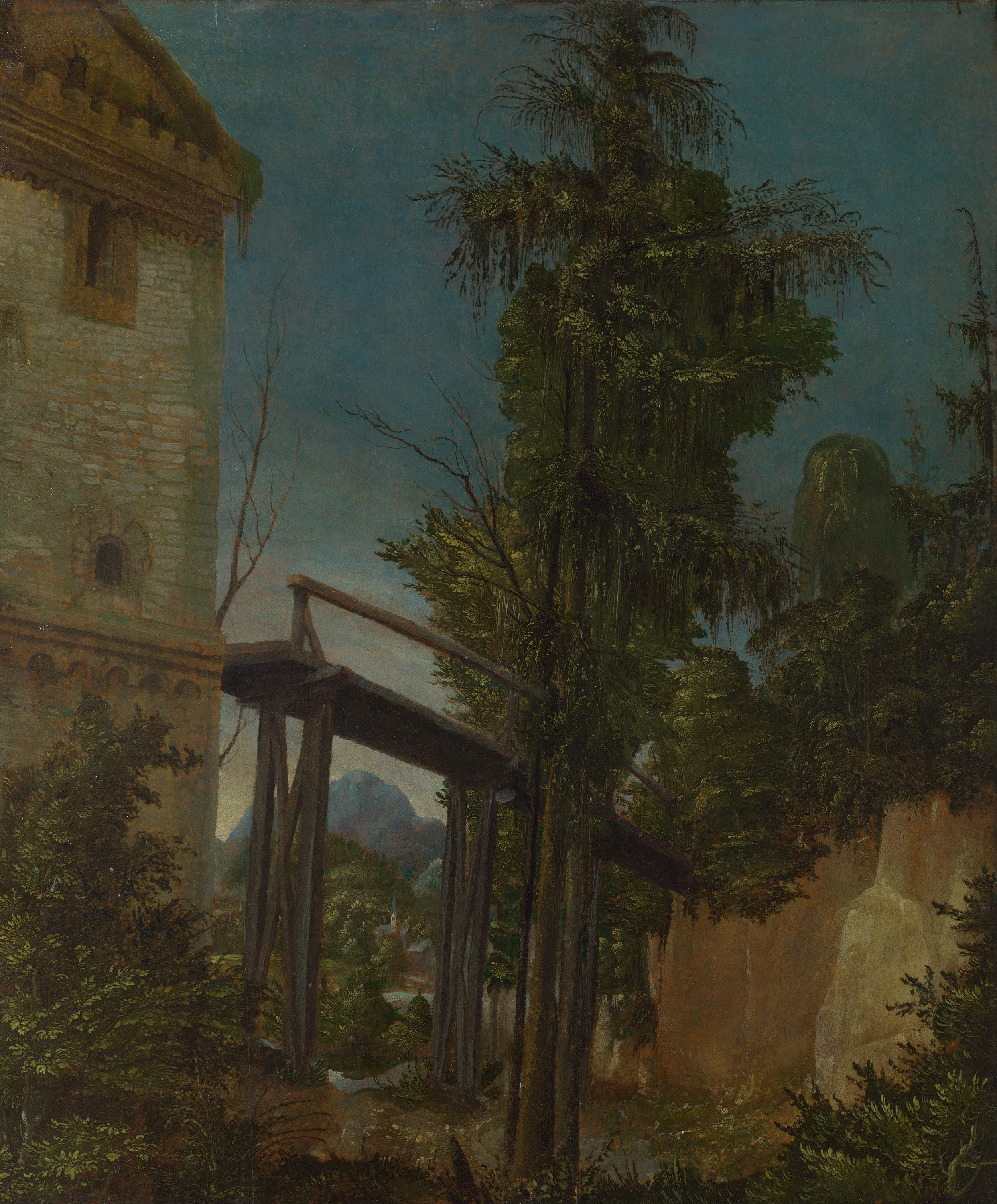 In Western art, earlier 'independent' landscape paintings, going back to Albrecht Altdorfer, do not have the air of real places seen at real moments.  There are plein air sketches that have this quality, but they do not resemble the Velázquez either.  Claude made such studies in the Roman Campagna and the example below is by another contemporary, Van Dyck, who was court painter to Charles I while Velázquez worked for Philip IV of Spain (The Vanishing Man is about a portrait of the young Charles that was apparently painted by Velázquez, or possibly by Van Dyck, or maybe neither...)  The View of the Garden of the Villa Medici is different, more reminiscent of certain oil sketches made in the late eighteenth century (the cloth on the balcony is like the washing hung out on Thomas Jones' A Wall in Naples).  It could have been a sketch of this kind, but the Prado's curators (quoting Javier Portús) say that it is currently considered to be a finished, self-sufficient work. 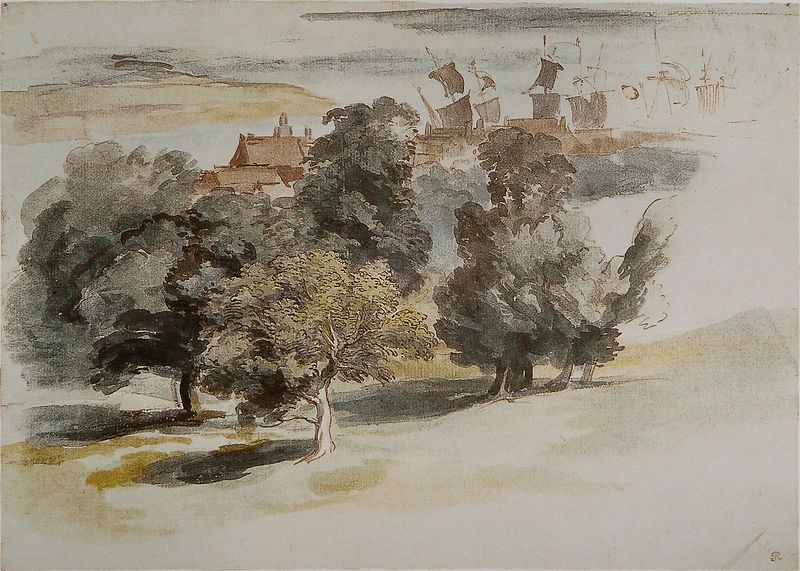 
'The weave of the cloth is exactly the right size to imitate the pattern of bricks at that distance.  This is one of Velázquez's unimaginably subtle calculations.  How could he guess in advance, or did it come to him as he painted?  This is a great question with his art: what grows out of what, how it all evolves at leisure, or at speed, by chance or design.  But what one sees here is something akin to precision engineering, in terms of vision and judgement: each brick finds its tiny outline in the grid of threads.' 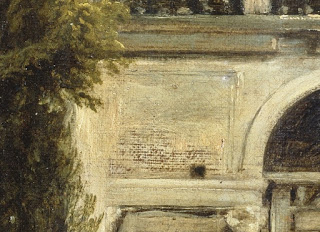 Perhaps surprisingly, Cumming makes no mention of the fact that this painting of the Villa Medici has a companion piece, also in the Prado: a view of the same structure seen from a different angle, but with more prominent foreground figures.  It is a marvellously strange, enigmatic image; in the background a man looks out at the distant view, like a Romantic Rückenfigur, and beside him the statue of sleeping Ariadne foreshadows the sequence of mysterious Ariadne paintings de Chirico painted in 1912-13.  There might originally have been two more of these paintings.  It may be that what we have now 'are two of the four little landscapes that the artist sold to Phillip IV in 1634' (Portús).  The disappearance and reappearance of artworks is central to The Vanishing Man and now, after having read it, I can't help wondering about the possibility of other Velázquez landscapes one day coming to light. 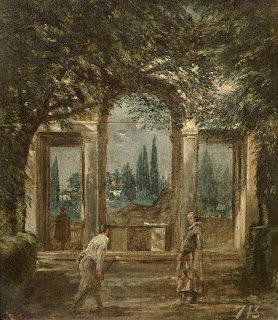 Diego Velázquez, View of the Garden of the Villa Medici, with the statue of Ariadne, c. 1630
Source: Prado
Posted by Plinius at 5:47 pm