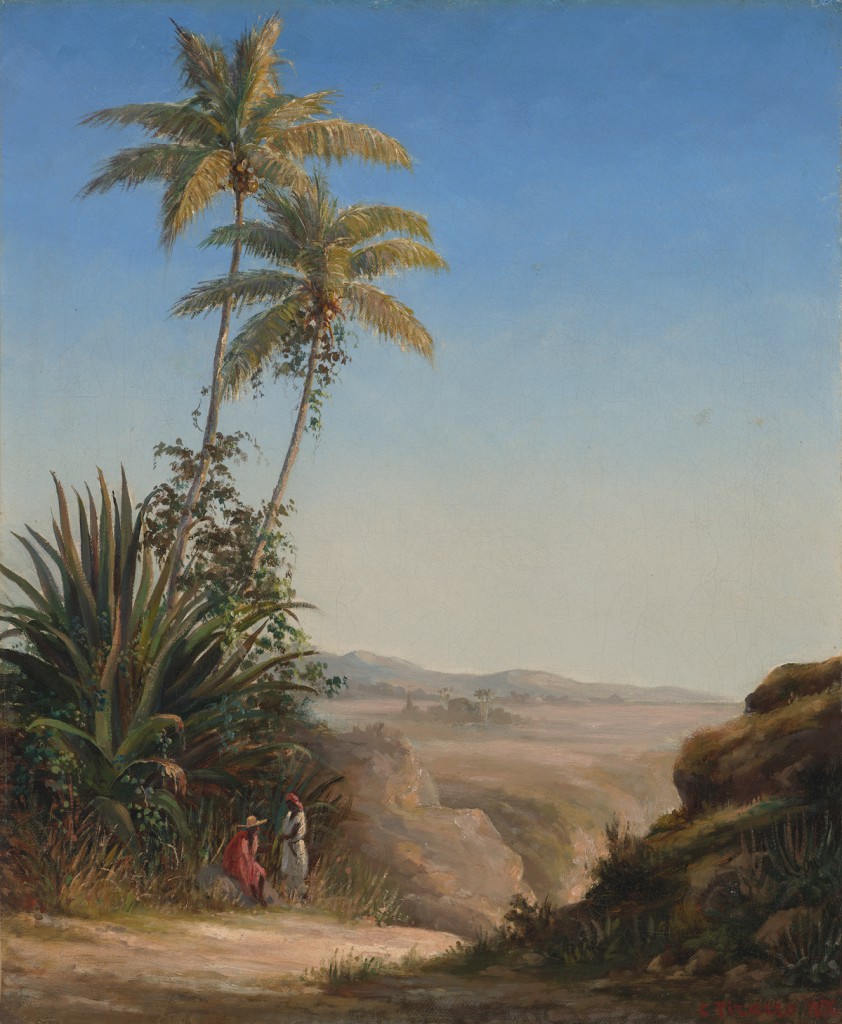 I was reading in the news the other day about a forthcoming Tate exhibition, Impressionists in London, French artists in exile (1870-1904), which will include two views of Kew by Camille Pissarro that have never been shown in the UK before.  I'm sure it'll be interesting, but I'd have been much more curious to see an exhibition that has just finished at Ordrupgaard in Denmark: Pissarro. A Meeting on St. Thomas.  This 'meeting' was with the Danish Golden Age painter Fritz Melbye, who arrived seeking inspiration on St Thomas - now one of the U.S. Virgin Islands, then part of the Danish West Indies - around 1850.  The young Pissarro had been sent away to school in France but was back working for his father whilst aspiring to become an artist.  The two of them became friends and in 1853 they headed off to Venezuela, where they would spend two years sharing a studio before parting company - Pissarro for France and the birth of Impressionism, Melbye for further adventures in the Caribbean and Far East.

Pissarro is also the subject of an excellent New York Review of Books article by Julian Bell which discusses two more exhibitions dedicated to his work in Paris.  It begins with one of the paintings that appeared in the first Impressionist Exhibition in 1874, Gelée blanche.  This is now in the Musée d'Orsay, who quote the most scornful response from a contemporary reviewer, Louis Leroy: 'those are sheer scratches of paint uniformly put on a dirty canvas. It has neither head or tail, neither top or bottom, neither front or back.''  It is hard to imagine any treatment of this humble motif that would have pleased such critics, but Pissarro's winter earth, painted without earth colours, must have seemed particularly off putting.  You can't simply enter into this landscape, letting the eye be led into the distance.  Hoar Frost is a world away from Pissarro's carefully composed view of St Thomas.  Its rough paint surface is hard going, like the frosty ground beneath the peasant's feet.

The whole of Julian Bell's article on Pissarro is well worth reading, but here is how he explains the particular magic of Hoar Frost.


'Oil painting can turn shadows from nothings into palpable somethings: slabs of rich color. The gently rising Île-de-France farmland depicted in Hoar Frost (Gelée blanche à Ennery) becomes an intricate weaving of russets, blue-greens, umbers, and pale yellows as morning sun shines on it from behind a row of poplars. As you approach the canvas, the bristles that have scuffed it with stiff, clotted brushloads seem to rasp your skin, and you are jolted into a poetry of chill January: a poetry sustained by close plein air observation and resolved with a scrupulous completeness.

'At the same time, you may perhaps register the oddness of the operation. Those long stripes of shadow criss-crossing the ruts and country road are cast by no visible object. The colors of what’s sunlit and the colors of what isn’t meet in stout equivalence on the canvas, but for anyone on the scene—say that trudging peasant with his load of sticks—the former would have priority. We expect grass to be green more than we expect it to be blue. In effect, the shadows spook the comfortable farmland, nagging us with the consideration that a further unseen presence stands beneath the poplars, that of the observing artist.'

The Field of Gold said...

I found the frosty painting drew my eye in. The St Thomas despite the careful composition did not. Maybe too careful a composition.