A Sleepwalk on the Severn 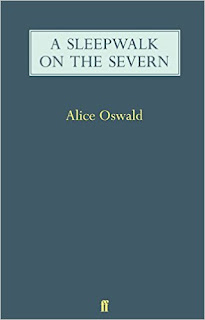 I have just read Alice Oswald's new book, A Sleepwalk on the Severn. I've written here before about her earlier river poem, Dart, a work which seems to gather new admirers with every passing year (Germaine Greer apparently thinks Alice Oswald should be the next poet laureate). Dart, according to The Observer, 'was the result of three years of locally recorded conversations and her new work, A Sleepwalk on the Severn, is likewise grounded in footslogging research. The poem gives voice to a slippery crew of real river folk, among them a birdwatcher, a vicar and an articled clerk, who haunt the Severn estuary. Sleepwalk is a weird dream of a poem, set at night over five different phases of the Moon. Though a note tartly informs the reader that "this is not a play", the work it most often recalls is Under Milk Wood, with its counterpointed voices and ardent attentiveness to place.' I found it much less accessible than Dart and will need to give it some time to sink in I think. You can hear some of it at the end of a slightly stilted Woman's Hour interview, and read some lines on the website of Jeanette Winterson (another Oswald fan).


Sleepwalk was commissioned by Gloucestershire County Council. I have talked here before about art that is commissioned to consider particular landscapes, such as the photographs (Jason Orton) and text (Ken Worpole) of 350 Miles, An Essex Journey. It is easy to see how money could be found for books that generate interest by exploring aspects of a locality, or for site specific artworks that draw new visitors. And in these days of 'relational aesthetics', landscape art which invites participation or involves local people should be even more attractive. Sleepwalk, like Dart, is a collage that uses real voices and actual history (in this it is partly in the tradition of earlier poems of place, like Paterson, or Charles Olson's Maximus Poems which centre on Gloucester, Massachusettes). The poem is also being given back to the people of the Severn catchment in the form of a theatre piece that is on tour this spring.
Posted by Plinius at 9:33 pm