D. H. Lawrence was not 'profoundly interested in landscape'. In a 1929 essay 'Introduction to these pictures', he praises artists like Titian, Velazquez and Rembrandt, who depict real people, and criticises lesser painters like Reynolds and Gainsborough, for whom the clothes were more important than the body. He then goes on to say that 'landscape seems to be meant as a background to an intenser vision of life, so to my feeling painted landscape is background with the real subject left out... It doesn't call up the more powerful responses of the human imagination, the sensual, passional responses... It is not confronted with any living procreative body.'

The fact that landscape painting avoids dealing with the body is the reason, according to Lawrence, why the English have excelled at it. 'It is a form of escape for them, from the actual human body they so hate and fear, and it is an outlet for their perishing aesthetic desires... It is always the same. The northern races are so innerly afraid of their own bodily existence... that all they cry for is an escape. And, especially, art must provide that escape.' This would be one way of interpreting the northern 'Romantic tradition' of landscape painting (which I've discussed here before). And whilst these comments seem almost stereotypically Lawrentian, they point to a real concern that landscape art can represent a refusal to engage with humanity - an accusation that could still be levelled at land artists like Richard Long, walking in the wilderness.

Lawrence goes on to describe the impressionists' escape into light and then the post-impressionists who 'still hate the body - hate it. But, in a rage, they admit its existence, and paint it as huge lumps, tubes, cubes, planes, volumes, spheres, cones, cylinders, all the "pure" or mathematical forms of substance. As for landscape, it comes in for some of the same rage. It has also suddenly gone lumpy. Instead of being nice and ethereal and non-sensual, it was discovered by van Gogh to be heavily overwhelmingly sensual.' 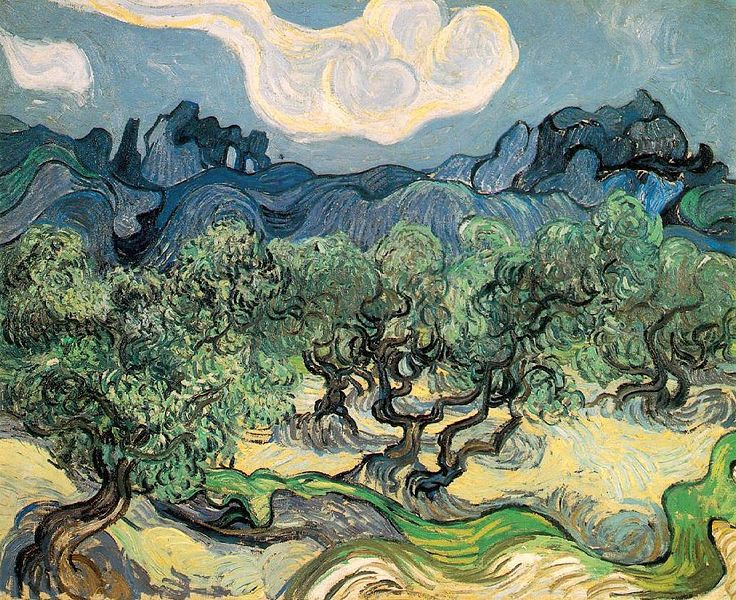 I've been aware, from a young age, of the absence of figures in my work, even my drawing as a child. I do not believe this is because I "hate" the body or my own.

Running with the thesis of Paul Virilio (Art & Fear), in the 20th century artists reflected the desecration of the human body in western culture. He sees this in WWI, WWII, concentration camps. napalm, nuclear war, and so on. He sees it in Picasso and DeKooning, but also performance artists, like Orlan
(www.orlan.net/) and spectacle exhibitions like Bodies ( http://www.bodiestheexhibition.com/ )

I should point out that Lawrence's essay is mainly about Cezanne and his authenticity, his revolutionary quest for the real. Lawrence is less interested in Cezanne's landscapes than in his still life paintings, with apples so frighteningly real that his followers had to turn them into abstractions. Van Gogh's landscapes, in contrast, were a projection of the artist himself.

Lawrence talks about landscape as the main modern genre but by the time he was writing it had already largely disappeared or been transformed into 'denatured visions', as I discussed in an earlier post.

I do not understand art but nice picture.