A fugitive inscription on the pages of the earth

Sometimes I think that an ideal landscape poetry would be written by the landscape itself. How? Some examples from Philippe Jaccottet's poetry (see Under Clouded Skies & Beauregard and my earlier post): wind on water is 'a fugitive inscription on the pages of the earth,' darkness is 'thin and threatening ink', the flight of birds 'calligraphy in the sky'. Eugenio Montale is another poet who sees writing in nature - a translation of 'Quasi una Fantasia' by David Young reads 'with joy I’ll read the black / figures of the branches, stark against the white, / an esoteric alphabet'. Similarly, William Carlos Williams writes in 'The Botticellian Trees' of the thin letters that spell winter and the alphabet of trees. I'd be interested in other examples... 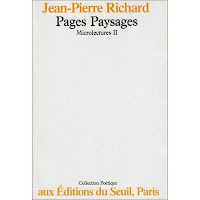 I'd also love to know more about Jean-Pierre Richard's Pages paysages (Mark Treharne mentions it in his introduction to Jaccottet's poems). Apparently it develops the idea of the page as a landscape, which would mirror the poems I've just mentioned... The book seems hard to get hold of even in French and I don't think it's been translated.

China: Empire of Living Symbols (see my previous post) includes an illustration that shows how close the pattern of leaves can come to writing. It comes from the famous Mustard Seed Garden Manual of Painting, the first part of which was published in 1679. Calligraphy and painting seem almost to merge here and suggest the possibility of a kind of landscape art suspended somewhere between poetry and painting. 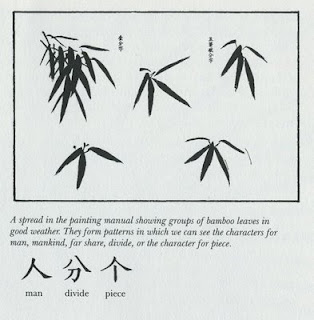 Hope you don't think I'm cheeky for mentioning my own work, but writing (messages) within landscape is a theme that comes up in my poems. I'm particularly fond of this image -

Hoar frost trembles
at the edge of bramble leaves;
love letters to birds
in crystal.

As always, I'm enlightened by your writing.
arcady