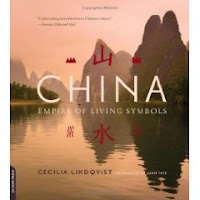 China: Empire of Living Symbols is a book I've been recommending to anyone with even a passing interest in China. A collection of rather tired adjectives come to mind which don't really do it justice: charming, fascinating, beautiful. The book discusses the origins and evolution of all kinds of Chinese ideographs, but here I'm focusing on landscape. The cover of the book shows the characters for 'mountain' and 'water' - the smaller symbols are the early versions of these characters found on Shang dynasty bronzes, which resemble more closely the corresponding natural features. 'The character for water is the picture of a river with its currents, whirlpools, and sandbanks, as one sees when standing on the riverbank looking over the course of the river.' The character for mountain resembles China's sacred mountains - Taishan, Songshan and Huashan.

Cecilia Lindqvist juxtaposes the character for mountain written by the great painter-calligrapher Mi Fu (or Mi Fei) (1051-1107) with some of the mountains he painted. 'Despite the difference in technique, there is an unmistakable similarity between the character for mountain and the mountain peaks in the painting, not only in their outward form but most of all in the strength they convey.' Mi Fu and his son Mi Youren originated the cloudy mountain style of landscape painting in China. 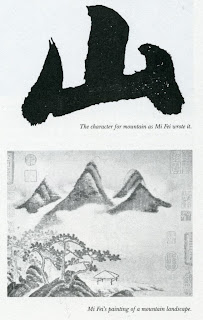 The book discusses some other 'landscape' characters: 'island' which seems to derive from a picture of sandbanks in a river, 'valley' which looks like the opening to a valley, 'cliff' (included in Chinese compound characters) which clearly depicts a cliff, and 'rock' which seems to show a boulder that has fallen from a cliff.

It is all very reassuring to a reader like me who knows little about the Chinese language but whose imagination was caught long ago by Ernest Fenollosa's The Chinese Written Character as a Medium for Poetry and the 'ideogrammic' poems of Ezra Pound that it influenced. There have been many articles explaining how wrong Fenollosa was, e.g. in giving the impression that many Chinese characters have pictorial origins. Lindqvist's book, whilst clearly focusing on the primitive characters which have an iconic quality, shows how these occur throughout the whole of Chinese culture.

Fenollosa's notion that Chinese characters contain an inner energy and convey strong verbal actions may have been fanciful, but there is still something very appealing in the idea that a poem in Chinese can relate directly to what it signifies (a mountain) through the shape of a signifier, and that such a poem can be written out with all the artistry of a landscape painting.

There are numerous Chinese mountain poems on a site I've mentioned before, Mountain Songs, such as 'Climbing Omei Mountain' by Li Bai (Li Po). The character written by Mi Fu and reproduced above can be seen here in the poem's title,

and Li Bai's description of Omei mountain resembles a 'cloudy mountain' painting: 'The blue mists support me / the sky opens out; / Colors commingle / is it a painted picture?'
Posted by Plinius at 9:07 pm

this is really really interesting. i'm so focussed on fenollosa's relationship with dow, and his involvement with japanese art and buddhism, that i'm virtually unaware of this whole other side.

(i mean i know that his wife gave his papers to pound to finish? something like that, but that's about it....)

another thing that interests me is the influence of writing/character on national character: ie. no straight lines in the east and little else in the west....

Beautiful blog! I have my landscapes too! You're added in my reader.

Thanks lotusgreen. Yes, Fenollosa has had a subterranean influence on modern poetry through Pound and his essay is well worth reading even if it is based on some misconceptions.

Chinese calligraphy in the xing shu or cao shu script looks very free but the basic characters are made up of eight kinds of straight stroke within a square...