The death of J. G. Ballard is very sad news - a writer I've loved since reading his disaster novels and short stories as a teenager.

From the many riches of the Ballardian website, I'm linking here to a piece on Flooded London, with some great photos by Squint/Opera and a quotation from The Drowned World (1962):

'The bulk of the city had long since vanished, and only the steel-supported buildings of the central commercial and financial areas had survived the encroaching flood waters. The brick houses and single-storey factories of the suburbs had disappeared completely below the drifting tides of silt. Where these broke surface giant forests reared up into the burning dull-green sky, smothering the former wheatfields of temperate Europe and North America. Impenetrable Mato Grossos sometimes three hundred feet high, they were a nightmare world of competing organic forms returning rapidly to their Paleozoic past, and the only avenues of transit for the United Nations military units were through the lagoon systems that had superimposed themselves on the former cities. But even these were now being clogged with silt and then submerged...' 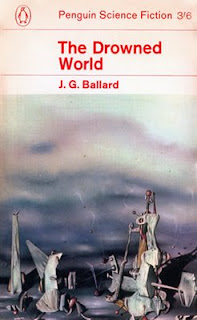