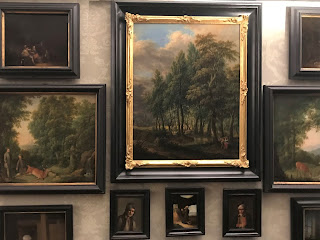 Paintings in the Goethe House, Frankfurt

I was on something of a Goethe pilgrimage last weekend, with five stops, beginning in his childhood home in Frankfurt.  This was where he began Faust and wrote Werther before moving to Weimar at the age of twenty-six.  The house itself was destroyed in an Allied bombing raid but has been reconstructed; the contents were all kept safe during the war.  What you see when you look round is essentially the home Goethe's father created, including his pictures - some of them landscapes - all framed in black and gold.  I particularly liked two circular landscape views in the music room either side of a pyramid piano. There is no readily accessible information on who painted these, which is a pity because I would love to know more.  The website refers to paintings 'in the Dutch tradition (Trautmann, Schütz the Elder, Juncker, Hirt, Nothnagel, Morgenstern), and by the Darmstadt court painter Seekatz'.  Schütz the Elder was a landscape specialist, so perhaps they are by him. 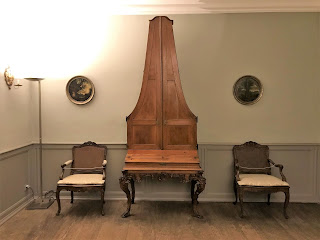 The music room in the Goethe House, Frankfurt

From Frankfurt I travelled to Weimar and the Park an der Ilm, landscaped from 1778 under the influence of Goethe.  It was based on the Wörlitzer park, Germany's first English-style landscape garden, which also inspired the setting for Goethe's novel Elective Affinities (which I will write about in my next post).  In the park you can look round Goethe's Garden House, his first Weimar residence, bought for him in 1776 by Duke Carl August.  Here he could write while listening to the water running over a weir in the river.  Among Goethe's landscape sketches on the wall are three he called 'My Moonlights'.  "Gazing at the moon from his cottage," the audioguide says, "Goethe was frequently inspired to bathe in the Ilm River by moonlight."  One of Goethe's best known poems is 'An der Mond' ('To the Moon'), a poem he sent in a letter to Charlotte von Stein in March 1778. Goethe returned to this garden house near the end of his life to work on the Italian Journey (this account of his travels in 1786 has always been one of my favourite books, in the classic translation by W. H. Auden and Elizabeth Mayer).  To help remember the topography of Rome he had two large panoramas of the city put up in the dining room.  The print I photographed below is Giuseppe Vasi’s view of modern Rome as seen from the Janiculum Hill (1765).  Turn round and on the opposite wall you see Pirro Ligorio’s bird’s-eye view of ancient Rome, originally published in 1561. 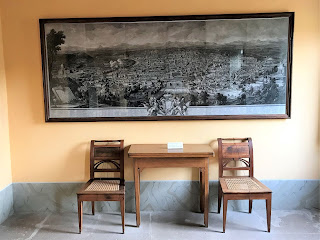 A panorama of Rome inside the Garden House

From the Garden House I moved on to the main Goethe House and Museum in Weimar, where you start to get an idea of the extraordinary range and depth of his collections.  There are, for example, cases he had specially made for Majolica, which he wrote about in an 1804 essay.  But the true breadth of Goethe's interests was really underlined at my fourth stop, the Schiller House, which was hosting a superb exhibition called 'Adventure of Reason: Goethe and the Sciences around 1800'.  Here there was evidence of his interest in many branches of knowledge that relate indirectly to landscape, from botany (the 'urplant'), fossils and vulcanism to light and colour theory.  He was clearly a key node in the era's overlapping intellectual networks and among his many correspondents, as I've mentioned here before, was the landscape painter Carl Gustav Carus.  Goethe owned this painting by Carus, which reminded me of the chalk cliffs I wrote about in Frozen Air. 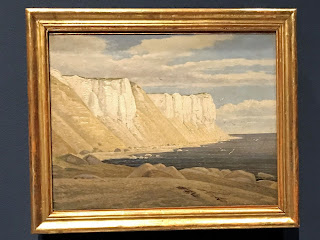 The drawing below by Goethe below looks at first sight like a view of cliffs, but is actually a Hypothetical Depiction of a Mountain. It is a good example of his interest in morphology and archetypal structures.  Goethe had a professional interest in geology through his involvement in mining, but it was evidently an absolute passion for him.  His geological collection eventually numbered 18,000 items.  I loved this quote about his collection of tin specimens:

'For many years, especially after 1813, Goethe was occupied by stannous (tin) rock formations.  He collected them in Bohemia and Saxony and had them sent to him from all over Europe.  He called it his "tin pleasure".  He considered tin to be the primeval metal, as it marked the end of the granite age.  Despite years of study, he only published one short article on the subject of tin.' 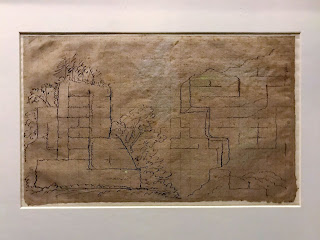 Goethe died in 1832.  Just a century later the Nazis were on the verge of power and five years on they were constructing a concentration camp on the beautiful wooded hill overlooking Weimar. The camp was originally going to be called Ettensburg, but because this place name had such strong associations with Goethe and enlightenment, it was decided to use the name Buchenwald, 'Beech Wood'.  Trees were cleared for the building of the camp, but one oak tree was left standing.  The inmates began to call it Goethe's oak, a living symbol of a better Germany.  The tree was damaged by bombing in 1944 and then felled, but its base has been preserved as part of the Buchenwald memorial.  You can see it in my photograph below under last weekend's grey winter sky.  The dark shape among the trees behind it is the tower of the crematorium. 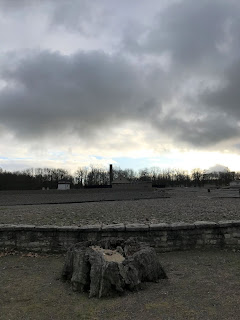 Buchenwald
Posted by Plinius at 2:49 pm