Carl Gustav Carus (1789-1869) published his Nine Letters on Landscape Painting in 1830, prefaced by a letter from Goethe suggesting that they 'will delight both artists and amateurs by opening their eyes to the manifold associative harmonies within nature.'  They are probably best known today for their emphasis on the importance of science and the study of nature, although this is only apparent in the later letters, the first five being closer in spirit to Caspar David Friedrich, whom Carus knew and admired.  Carus apparently started work on the letters in 1815 and sent the early ones to Goethe in 1822 - they took so long to compose because he was busy in these years publishing scientific research and working as a doctor and medical professor, as well as doing some landscape painting on the side.  Their addressee was 'Ernst', named in remembrance of the three year old son Carus lost to scarlet fever in 1816.  In his preface to the first edition Carus wrote that 'amid earnest endeavours and onerous duties of many kinds, art has been a true friend and silent comforter.' 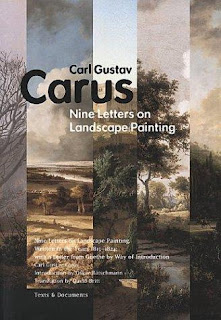 Carus coined a new term for the kind of art he wanted to see: 'earth-life painting' (Erdlebenbild).  Like many subsequent artists, he found the word 'landscape' too restrictive - 'trivial and inadequate'.  Carus urged artists to study the 'physiognomy' of landscape and 'learn to speak the language of nature.'  What was really needed to help them was a book that would 'present earth life to the reader in all of its many aspects' and indeed Carus himself eventually wrote such a book (Twelve Letters on Earth-life, 1841).  Carus obviously found it hard when writing his Nine Letters on Landscape Painting to point to examples of artists who were engaged in a version of earth-life painting.  Instead he turned to literature: Goethe's poetry, Humboldt's Views of Nature, and a book on mushrooms by 'the excellent Nees von Esenbeck.  Read what he says on autumnal vegetation, and you will find that pure knowledge of nature, artistically formed, turns of its own accord into the noblest poetry.' 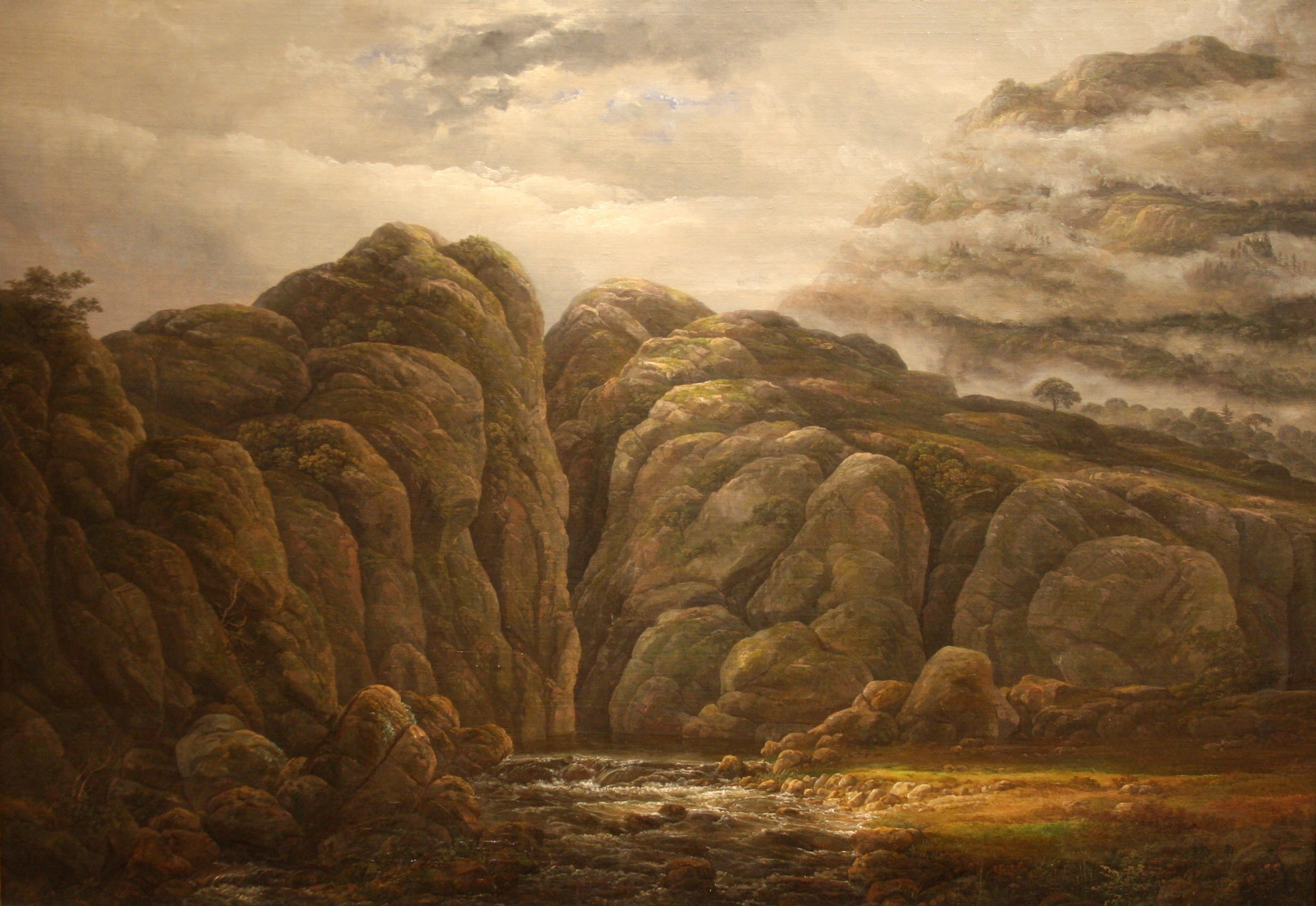 It was only in 1833 that Carus finally identified an earth-life painter, a young artist whose work exceeded the best landscapes of Ruisdael... George Heinrich Crola.  (No, me neither... Apparently Crola was a protegé of Friedrich and Johan Christian Dahl, who moved to Munich and became a specialist in trees and woodland subjects).  It is perhaps surprising that Carus had not already described Dahl himself (with his evident interest in geology) as an earth-life painter, as Oskar Bätschmann points out in his introduction to the Getty reprint of Nine Letters. Carus continued to paint himself, although his work continued to show the strong influence of Friedrich, as can be seen below in the imaginary memorial to Goethe, who died in 1832.  Bätschmann calls this a 'mystical "earth-life painting" in which the music of the spheres, the harmony of the cosmos, presides over the harmonious complementarity of geological and minerological interests.' 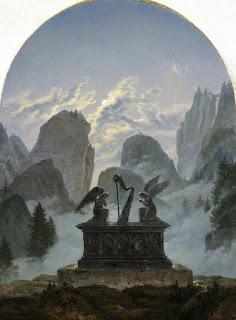 I'll end this post with a painting in words, one of several 'Fragments from a Painter's Journal' that Carus appended to his last Letter as examples of 'the way in which a moment in nature may be instantly apprehended as a finished picture.' The view was 'taken' at 5 o'clock in Dresden's Großer Garten one day in February 1823 and it is a scene very reminiscent of the conditions outside today, with cold winter light and patches of frozen snow:


The sun had gone down; against the dull yellow sunset sky, a wide band of gray snow cloud, uniform in tone, extended down to the horizon; in the bluish sky above, scattered cumulus clouds still caught the light of the departed sun.  The distant view was shrouded in brownish, greenish, and finally violet tones.  Streaks of snow, lighter than the gray cloud but darker than the light sky, punctuated the dark surface of the ground.

In the foreground, on the edge of the moat, two massive, ancient willows stretched out their gaunt branches, nearly black; around their trunks the snow had thawed and then refrozen, so that, close to the strong dark tone of the tree trunks, a sparkling light reflected the bright sky; it was lighter than anything else in the foreground, for even the jagged ice on the frozen pool could be seen only by subdued light.

Very informative article on earth-life painting by Carus. The images are stunning.