Rising sun over the landscape of Mount Paektu

Last week I discussed here the way artists over the centuries have depicted Korea's Diamond Mountains, but these extraordinary peaks are are not the most revered landscape in this part of the world.  The great stratovolcano, Mount Paektu, features in both North and South Korea's national anthems and has always been considered a sacred site - the birthplace of Dangun, founder of the first Korean kingdom, whose father was the Son of Heaven.  Mount Paektu is in what is now North Korea and has become inextricably linked with ideas of the country's leaders, a process that began with an epic poem, Cho Ki-chon's 'Mt. Paektu' (1947).  A recent example is 'We Will Go to Mount Paektu', a song which Laibach wanted to cover on their controversial visit to North Korea in 2015.

For his 2016 documentary Into the Volcano, Werner Herzog visited Mount Paektu with volcanologist Clive Oppenheimer.  In the film they note how frequently it appears in official iconography as a backdrop to images of North Korean leaders.  They are also shown another pilgrimage site, Kim Il-sung's secret log cabin where, according to his official biography, Kim Jong-il was born in 1941.  Herzog says in his voiceover that "in the Christian World, this would be like visiting the birthplace of Jesus - the stable in Bethlehem".  I have featured the humble retreats of poets and artists many time on this blog in the past; here again we have an example of the cultural significance of a solitary hut in a mountain landscape. 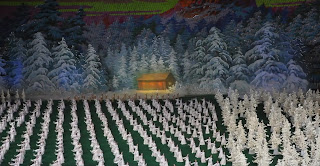 The film goes on to show images of this log cabin in the snow and Mount Paektu at sunrise.  These represent a form of landscape art that requires vast numbers of people all obeying strict instructions, neither creating or seeing the image but themselves forming a human canvas.


"In the country's biggest stadium, more than 100,000 people participate in creating a unique artform.  The picture of the hut in the snow is not a painting.  It is made of human pixels.  And this is how it's done.  A prearranged pattern of coloured cards is held and flipped over in sync.  Here: the rising sun over the landscape of Mount Paektu."

We often think of the way nature is reshaped in response to our dreams and desires, or the way artists have painted mountains as an expression of their individuality and subjective experience.  Here, in a setting that approaches the scale of a real landscape, there are no individuals and only one official story. 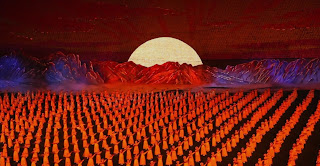