In these days of mass global travel it feels as if everywhere of note is being constantly visited and photographed, but one of the most spectacular and culturally significant landscapes in the world is almost inaccessible.  The Diamond Mountains, known collectively as Mount Geumgang, are in what is now North Korea.  The art they inspired was recently the subject of an exhibition in New York which I would love to have seen. The Met's catalogue (a very lovely book) explains the three main areas travellers sought out, following in the footsteps of poets, painters and travel diarists: Inner Geumgang is a lush landscape of streams and pools; Outer Geumgang has steep trails, dramatic peaks and waterfalls; and by the shore, Sea Geumgang has strange rock formations and pillars rising from the waters. The painting above shows the entire mountain range and is by Jeong Seon (1676-1759), the artist who did more than any other to popularise the area.  It is an example of a 'general view' that tries to capture the whole landscape at once, rather like a modern skiing map.  Interpreters have seen this painting in cosmological terms, representing yin and yang - dark and light, wet and dry, earth and universe. 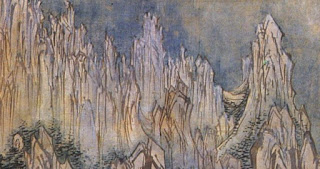 Detail of the General View of Mt. Geumgang

The painting on the cover of the Met's catalogue (below) is also very much a landscape of contrasts.  It is one of the thirteen views in Jeong's Album of Mount Geumgang (1711), painted after what is thought to have been his first visit to the mountains.  It shows the view from Danbal Ridge - 'Danbal' means "cutting one's hair" and comes from the idea that the view here is so astonishing it will lead the traveller to shave his head, become a monk and withdraw from the secular world.  In Korea people spoke of 'entering the mountain', in the sense of going into a spiritual realm, rather than 'ascending the mountain' and conquering it like a mountaineer.  Lee Soomi describes this painting in the catalogue:


'Jeong painted himself and his fellow travellers alighting in the magnificent scene.  Oer the clouds, the mountain's twelve thousand peaks shine as if in greeting.  Jeong juxtaposed the dark and earthy terrain of Danbal Ridge with the white, rocky peaks, defining the forested ridge with short Mi dots and emphasizing the mountain's steepness through sharp, diagonal forms.  A sheer fog hovers between the two kinds of mountains, creating a void that underscores the contrast.' 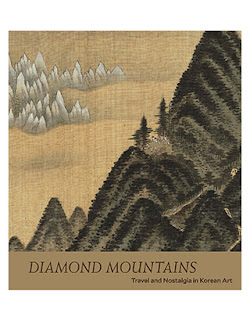 The Met website has a long and well-illustrated interview with the curator Soyoung Lee which is like a condensed version of the catalogue.  This includes views of the Diamond Mountains painted in subsequent centuries by literati, court painters and folk artists.  There are two remarkable twentieth century ink paintings, one by Byeong Gwansik (1899-1976) with a strange diagonal pinnacle cutting across the view, and another by Lee Ungno (1904-1989), where mountains are painted with strikingly beautiful brush strokes and colours (it would be a wonderful inspiration for anyone posting daily pictures at the moment for 'Inktober'). Soyoung Lee says that both of these artists


"travelled multiple times to the mountains and made sketches during the colonial period before 1945, when the peninsula was divided into north and south. Yet although they travelled and made sketches during this period, the finished paintings all date to post-1945, which speaks deeply to the particular sense of nostalgia people felt at that time, a nostalgia for a place before it was disrupted and divided. [,,,] The work of both these artists is deeply informed by a sense of longing and loss. They were recreating a site they had intimately experienced, which was no longer accessible to them."

Email ThisBlogThis!Share to TwitterShare to FacebookShare to Pinterest
Labels: mountains
Location: Seoul (I am a bit nervous about geotagging the actual site)