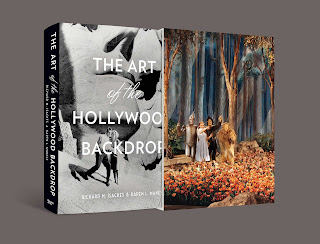 I’ve been looking through a library copy of The Art of the Hollywood Backdrop, a huge, glossy and expensive book based on material in the Art Directors Guild archives. Among its many full page illustrations there is a relatively brief history of painted backdrops in Hollywood, followed by short chapters on some key figures: George Gibson, Ben Carré, Duncan Alanson Spencer and two family dynasties, the Coakleys and the Strangs.

George Gibson (1904-2001) is possibly the most interesting of these from a landscape perspective, partly because he was also a well regarded water colourist and leading figure in the Californian School of plein air artists (many of whom worked in Hollywood). Gibson had been trained at Glasgow School of Art before emigrating to America during the Depression.  He had quite a low opinion of some of the backdrop artists he found working at MGM...


‘We had a large backing of mountains and pine trees to paint. At that time we had to work off fixed scaffolding with standing levels seven feet apart with a forty foot high backing. The pine trees in the foreground of the backing ran full size top to bottom. [When we] struck the fixed scaffolding, the only part of the pine trees that matched was their trunks. Every section on the seven levels [of scaffolding] had a different version of pine needles because each artist had his own conception of what pine needles should look like. It was obvious that they hadn’t been painting in the out-of-doors, or even bothered to look critically at a pine tree, if ever.’

Gibson was put in charge of work on backdrops for The Wizard of Oz, Brigadoon, North by Northwest, Forbidden Planet and many others.  The book includes photographs of the sound stages on which such movies were acted out, with their foreground props merging quite convincingly with painted landscape backgrounds.  There is an example of one landscape setting he painted himself, a church in the snow which can be seen in The Brothers Karamazov (1958).  However, many of the old backdrops have long since been damaged and lost.

When Mark Cousins was directing the Edinburgh Film Festival in the mid 90s he decided to draw a link between The Wizard of Oz and the city of Gibson's birth.  "We thought it would be fun and challenging to transform Edinburgh Castle into the Emerald City. No-one knew about the Gibson connection at that time."  I'm not sure what this transformation entailed, but certainly the connection has now been established and you'll find Gibson referred to in several online guides to Edinburgh. 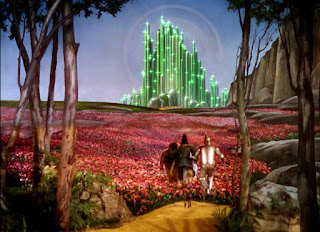